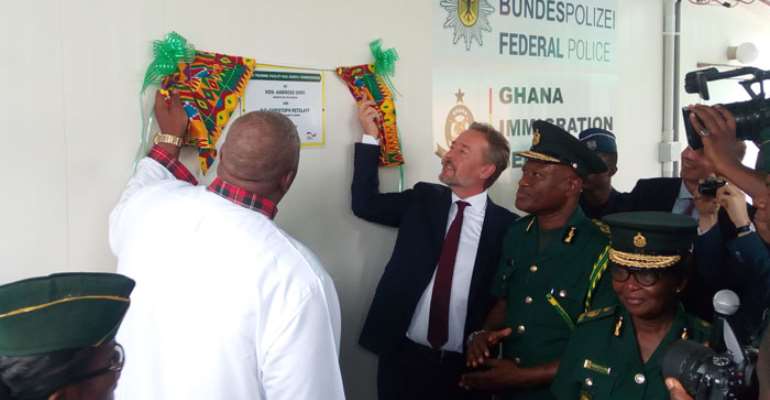 The Document Fraud Expertise Centre (DFEC) of the Ghana Immigration Service (GIS) has been provided with an ultra-modern training facility to improve personnel capacity in fighting document fraud and other trans-national related crimes.

The facility which was built and financed by the Federal Republic of Germany was duly inaugurated in Accra on Friday, April 12, 2019, by the Deputy Minister for the Interior, Henry Quartey, and the German Ambassador to Ghana, Christoph Retzlaff.

Speaking at the ceremony, the Comptroller-General of GIS, Kwame Asuah Takyi, said that the building of the facility was in line with fulfilling the human resource development pillar of the four-year strategic plan of the GIS.

“I charge the personnel at DFEC to ensure that strict maintenance culture is adhered to in ensuring a long life span of the facility,” he stressed.

He indicated that the work of DFEC has so far contributed immensely to the global fight against terrorism, money laundering, human smuggling or trafficking, drug trafficking and other trans-national crimes.

Mr. Retzlaff said that the challenge of peace and security within the West African region has necessitated the cooperation and collaboration between the government of Ghana and Germany.

Other areas of security cooperation between both countries are the provision of support to the Kofi Annan International Peace Keeping Training Centre (KAIPTC), provision of military advisors to the Armed Forces, as well as collaboration between the government on maritime security.

“We do these because we are convinced that security is the basis for development in every country,” he added.

For his part, Mr. Quartey expressed government's appreciation for the initiative by the Republic of Germany.

He described it as “timely intervention that has come at the right time to augment the efforts of government and that of the service to improve the capacity of officers in document fraud detection”.

He was of the view that good profiling and document fraud identification were necessary for effective border security which would in the long run reduce the threat of terror that was being experienced in other neighbouring countries.

Close collaboration between the European Union and the Government of Ghana led to the formation of DFEC which was officially commissioned in June 2010, with a mandate of serving as a back office for all document fraud related matters.

Over the years, it has established a strong working relationship with all EU embassies in Ghana by collaborating with Immigration Liaison Officers and Police Attaches.

The centre, which is currently manned by 16 officers, engages in information exchange, conducts investigation upon request from the Immigration Liaison Officers and also collaborates with international and local agencies to organise training programmes.