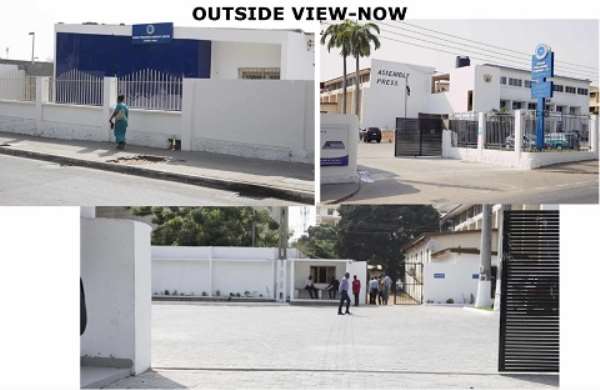 From a state of distressfulness, the Ghana Publishing company limited is now very competitive and making profits to the country due to recent investments made into the firm, Chief Executive Officer, David Asante Boateng has disclosed.

According to him, the company which was struggling to pay salaries less than two years ago has witnessed heavy investments in human resource development, the acquisition of new machines and the overall infrastructure of the company.

The investments he noted have given the company a better outlook and has attracted more clients including some leading figures of the National Democratic Congress (NDC) who printed their documents from the company during the recently organised internal primaries of the party.

These he noted has resulted in much efficiency and timely delivery of all schedules to customers which hitherto could not have been possible some few years ago.

Mr Asante Boateng declared to Parliament that the company is now very viable and is open to the general public urging all to do business with the Ghana Publishing Company at very competitive price.

On what new his outfit is doing, he revealed that the company has successfully drafted an electronic mode of doing gazette pending Cabinet approval to allow for electronic delivery of gazette.

This, according to him is expected to ensure quality and speedily execution of gazette at a very cost effective manner.

Mr Asante made the disclosure when he appeared before the Public Accounts Committee (PAC) of Parliament to respond to queries raised against the company in 2016 the Auditor General's Report.

The infraction, a deduction of Ghc 442, 723.12 by management in 2013 as calculations for SNNIT and withholding tax but not remitted to the appropriate bodies at the time has since been rectified.

Mr Asante explained to the Committee that the company was not competitive at the time hence did not attract any jobs from state institutions during the period where the infractions occurred in order to honour its financial obligations.

"speaking specifically to the 2013 year under review, Mr Chairman, the company was not competitive enough, state institutions were not even interested in bringing their printing and publishing jobs to the Ghana Publishing company limited, then still, the company had over 160 permanent staff on its hands to take care of and of course, other statutory payments at the end of the months,” he told the committee on Monday.

These coupled with the fact that machines belonging to the company lying idle, he said accounted for the reduction in the overall performance outlook in that particular year.

The story however is different today, with the attraction of several jobs from public institutions and private individuals.

In August 2017 when he appeared before PAC, Mr Asante Boateng expressed optimism of better days for the Ghana Publishing Company if government recapitalises the company.

He was responding to a question posed by Chairman of the Committee, James Klutse Avedzi, if under his leadership, he can repackage the company to be more viable.

“I believe strongly we have a team of competent management in place. The sector ministry is very much interested in the well-being and the overall re-establishment of the organization,” Mr Asante responded then.

The Ghana Publishing Company is responsible for the printing and publication of all Constitutional Instruments (CI), Legislative Instruments {LIs) of the Parliament and also publishes and gazettes byelaws and fees fixing of all Metropolitan, Municipal and District Assemblies in the country which is quite a profiting area for the company.

Its clientele includes the Electoral Commission of Ghana.

The Ghana Publishing Company (formerly called Ghana Publishing Corporation) was incorporated on March 9, 1965 under Legislative Instrument No. 413, and subsequently amended by L.I. 672 of December 11, 1970 to take over the functions of the former Government Printing Department and the Administration of the Government Free Textbook Schemes.

The Assembly Press has been converted into a Limited Liability Company under the Statutory Corporations (Conversion to Companies) Act 461, 1993, and re-named Ghana Publishing Company Limited in 2007.