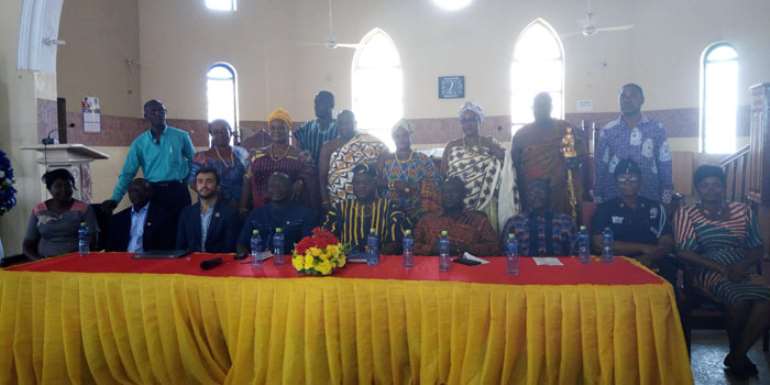 Some dignitaries after the meeting

The Akuapem South District Assembly of the Eastern Region is set to upgrade Aburi-Kom Clinic to the polyclinic status within the next 18 months.

At a public meeting, Frank Aidoo, the District Chief Executive, said although the district has clinics but lacks a major district hospital and residents had to travel to either Nsawam or Mampong for medical attention.

He said the contractors have just 18 months to complete the project and the assembly would do everything possible to support them to finish on time.

The Technical Director of the construction firm, Reginald Longdon, said when the project is completed, it would have wards, laboratories, pharmacists, examination rooms, mental health facilities, eye clinics, dental facilities, among other things.

The Member of Parliament for Aburi Constituency, O.B. Amoah said the district was hoping to spend some €6 million for the first phase of the project.

“We want the contractors to engage the community in the project. We want the community to also support the contractors in making the upgrading a reality. We thank God that we have come this far and we hope that within the next few months, it will take off and there will be no interruption within the 18 months that they have promised us,” he stressed.