100 Emergency Response Posts On Highways To Be Created 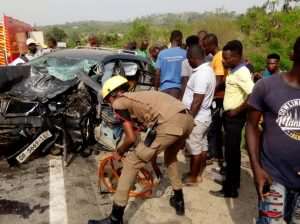 The Ministry of Transport in collaboration with the National Road Safety Commission (NRSC) is setting up 100 Emergency Response and First Aid Posts at strategic locations along the major highways.

Eight of such posts are already completed and fully equipped with medical supplies.

This is part of measures to minimize deaths while sustaining the life of victims of road traffic crashes through emergency response measures.

In an interview with Citi News, the Head of Communications at the commission, Kwame Kodua Atuahene said the facilities will be managed on a 24-hour basis by the Ghana Red Cross Society with support from the National Disaster Management Organization (NADMO), the police and the Ghana National Fire Service.

“The reality of it is that when accidents occur, the emergency team in an effort to assist crashed victims handled them poorly, and some suffer death as a result. We have deployed some in areas such as Asuboi, Nstuam and Sampa an across the regions. These areas have been selected on availability of data that we have and the frequency of incidents on that stretch. In Accra, you will find one right after the toll booth. These have strategically been located.”

Many believe that the increasing spate of road accidents in the country is because agencies such as the NRSC are not well resourced.

Since its creation, the NRSC has been acting in an advisory capacity

The Commission is therefore asking the government to speed up processes to give it an Authority status.

It says although giant steps have been taken towards the move, the government should not rest on its oars to give it more power to enforce road traffic regulations.

Kwame Kodua Atuahene bemoaned the Commission's current lack of the power to enforce road safety regulations insisting that the government should elevate the Commission to deal with the non-compliance of road safety standards.

“Three months ago Cabinet gave the approval for the Commission to be transformed into an Authority. The law is already at the Attorney General Department. I imagine that in the coming weeks it is presented to Parliament for the other processes to take place. It is to say that, government must hasten this process. They should have the will to assist in implementation of some of these interventions.”