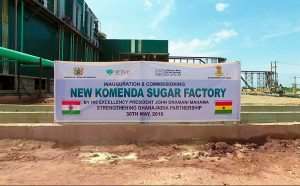 The Minority in Parliament has accused the ruling government of deliberately causing the Komenda Sugar Factory to be undervalued so it can be sold off cheaply to cronies.

According to the Deputy Minority Spokesperson for Trade, Industry and Tourism, Yusif Sulemana, government has side-stepped recommendations of a technical audit of the project only to pursue a motive of selling off the company.

The factory was shut down months after it was commissioned in 2016 and has been seemingly abandoned for the past 2 years.

Trade and Industry Minister, Alan Kyerematen on Thursday told Parliament, a new strategic investor will be announced by the end of April to take over the company.

In an interview with Citi News, the Bole Bamboi MP, questioned government's motives in its quest to sell off the company.

“Remember I said we went in for a loan totaling about $36.5 million. Now you are saying that we should forget of this and bring in a new investor. If you listened to the Minister very well yesterday, he is saying that the evaluation that they have done now, he is not sure that the project will cost the 36 million that we are talking about.”

According to the Trade and Industry Minister, the government has conducted a technical audit into what caused the shutdown of the factory in a bid to create the right conditions for it to be revived.

Answering questions in Parliament on Thursday, Alan Kyerematen said the quest to bring the factory back to life is on course.

“The Ministry in an effort to put the factory in production decided to initiate a new process in consultation with the transaction advisers to attract another strategic investor to acquire the assets of the Komenda Sugar Factory. I envisage that the final decision in respect with this matter will be taken by end of April.”

President Nana Akufo-Addo recently said the government is currently scouting for a strategic investor to inject life into the struggling Komenda Sugar factory.

While lamenting the lack of proper planning in the implementation of the project by the Mahama administration, President Akufo-Addo gave assurances of ensuring that the factory becomes viable.

“The previous plan that established is not the best. Those who started it could not complete it, and that is why we came to meet staggering dent and an idle factory.”

“The Minister of Trade and Industry is looking for a strategic investor to come and invest here. We are still searching for one because the initial plans were not the best. It is now we are coming to organize things,” President Akufo-Addo.”

The $35 million factory remains dormant, due to a lack of funds.

It was closed down in June 2016, barely a month after then-President John Mahama commissioned it.

It was expected to be producing about 1,250 tonnes of sugar each day.

Following the closure, the factory had to sell sugarcane at its 125-acre seedling plantation to distillers of the local alcoholic beverage popularly known as 'akpeteshie.'

Sugarcane farmers who had hopes of cultivating of supplying the Komenda Sugar factory have also been compelled to sell to producers of akpeteshie.