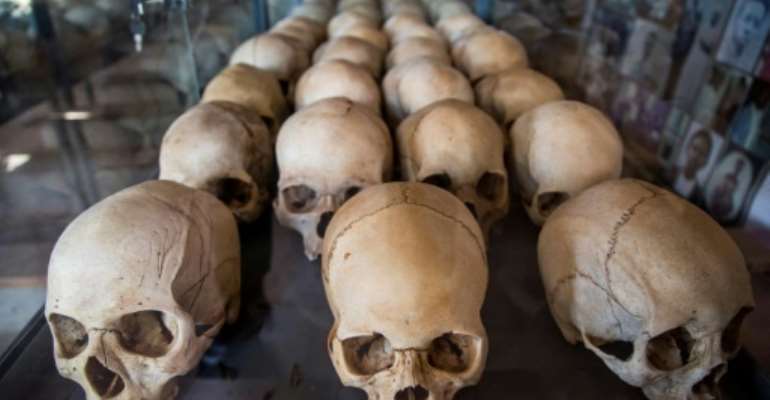 Rwanda on Sunday commemorates the 25th anniversary of the genocide in which at least 800,000 mainly Tutsi people were beaten, hacked or shot to death in 100 days of slaughter.

A quarter of a century on, the east African nation has recovered economically, but the trauma still casts a long, dark shadow.

On Sunday, as is the tradition every April 7 -- the day the genocide began -- President Paul Kagame will light a remembrance flame at the Kigali Genocide Memorial, where more than 250,000 victims are thought to be buried. 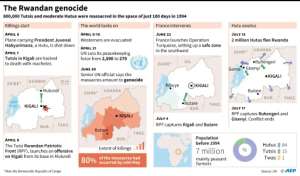 It marks the beginning of a week of commemoration activities, and the start of 100 days of national mourning.

In the afternoon, Kagame, who led the rebels who chased the genocidal killers out of Rwanda and has been in power ever since, will preside over a ceremony at the main football stadium in the capital.

The Amahoro National Stadium -- named for "peace" in Rwanda's Kinyarwanda language -- was used by the UN during the genocide to protect thousands of Tutsis from being massacred on the streets outside. 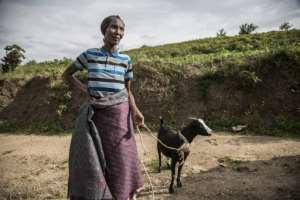 The genocidal Hutu forces, members of the old army and militia forces called the "Interahamwe", had been cheered on by blood-curdling anti-Tutsi propaganda that began on April 7, 1994, the day after the assassination of President Juvenal Habyarimana, a Hutu.

Kagame, then 36, was a rebel general when he led the mainly Tutsi Rwandan Patriotic Front (RPF) into Kigali on July 4, ending the ethnic slaughter.

Rwanda has changed nearly beyond recognition since then. 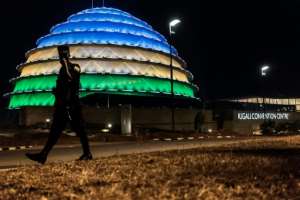 But Kagame has kept an authoritarian hold as he steers the small, landlocked East African nation through economic recovery.

"In 25 years, the things that we've been able to accomplish are really extraordinary," said Bruce Muringira, a 24-year old working for an advertising agency, and who like nearly two-thirds of Rwanda's 12 million people, was born after the genocide.

"I think we've evolved very much in such a short time."

Growth in 2018 was a heady 7.2 percent, according to the African Development Bank (AfDB).

The boom was boosted by help received from an international community pained by its failures to stop the genocide.

On Friday, French President appointed an expert panel to investigate France's actions at the time -- a subject that has dogged Franco-Russian relations for a quarter of a century.

Rwanda has accused France of being complicit in the genocide through its support for the Hutu-led government, and of helping perpetrators escape.

"We still see today that it is not perfect," Muringira said. "But we're putting in the effort to find a way to live harmoniously."

For a people left divided by the bloodiest of legacies, reconciliation is key.

Rwanda has banned any reference to ethnicity in public life, and has prioritised justice for the genocidal killers in a bid to rebuild relations. 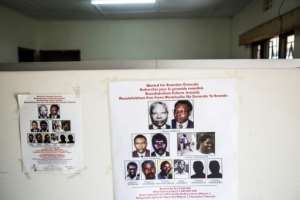 But the wounds have not healed.

For survivors, forgiveness remains difficult when the bodies of their loved ones have not been found and many killers are still free.

Kagame's iron-fisted rule -- seen by some as essential to impose order from chaos -- gained many critics, with criticism from the West of attacks on freedom of expression and opposition muzzling.

Critics of Kagame are often silenced, or driven into exile.

He was re-elected for a new seven-year term in August 2017 with nearly 99 percent of the vote, and constitutional reforms adopted by referendum in 2015 could allow him to stay in power until 2034. 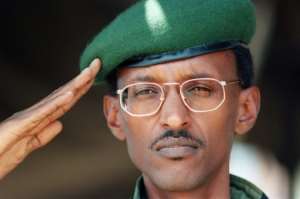 But there are signs of a change in Kagame's approach.

Now 61, the president appears to be loosening control somewhat, releasing a number of jailed opposition leaders.

"Kagame sees it as prudent to shed off his old narrative of being autocratic and overly intolerant to opposition," said one Rwandan political commentator who asked not to be named.

"Don't forget that as time goes by, he is becoming more cognizant of which legacy he wants to leave behind."

"I think the ruling party is no longer overly intolerant to opposing views. Over a period of time they have started listening to our views. Our manifestos have been now considered in government projects, not as before when they were ignored," he said.

Macron is not attending, with France represented by Herve Berville, a 29-year old Rwandan-born member of the parliament in Paris.

Perhaps most conspicuous in his absence will be former ally Ugandan President Yoweri Museveni, whose government Kigali accuses of sheltering Rwandan rebels.