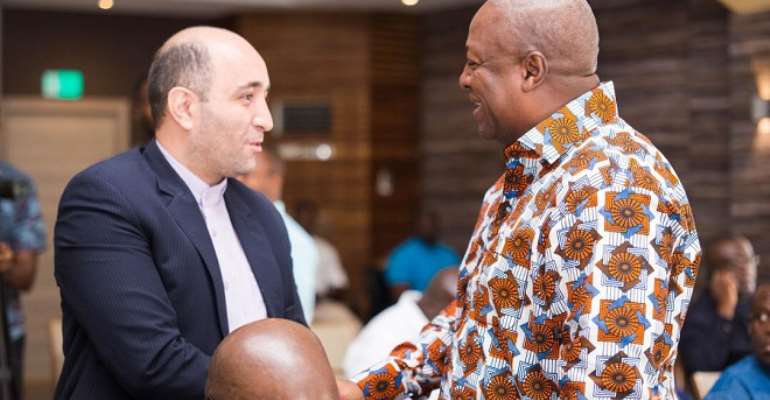 Former President John Mahama (right) with one of the diplomats

The family of the late Member of Parliament for Ayawaso West Wuogon has descended on former President John Mahama for showing a funeral video of a late police officer, Daniel Tieku, to diplomats at Peduase Valley, Aburi and claiming the video was shot during the funeral of the deceased lawmaker.

Mr. Mahama hosted the diplomatic community in Accra to present the National Democratic Congress position on the Ayawaso West Wuogon byelection shootings and in the process showed about two videos to the diplomats,

In one of the videos, the former President claimed, was on the funeral of the late New Patriotic Party's Member of Parliament for Ayawaso West Wuogon, Emmanuel Agyarko.

Whilst making reference to the funeral video, Mr. Mahama alleged some persons captured on the tape were hoodlums of the NPP, claiming that one of the male hoodlums was wearing an earring and so cannot be said to be a national security operative as he believe male personnel of the Ghana Police Service do not wear earrings.

In the second video, Mr. Mahama told the diplomats that same hoodlums who attended the funeral of the late MP were brought to Accra on January 31, 2019 to provide security for the NPP's candidate for the by-election, Lydia Seyram Alhassan who is the spouse of the deceased lawmaker.

But in a statement issued by the brother of the late MP, Boakye Agyarko sighted by DGN Online, the Agyarko family said the former president lied on their deceased relative and the family in general.

It said “the attention of the family of Emmanuel Kyeremateng Agyarko, the late Member of Parliament for Ayawaso West Wuogon has been drawn to a videotape circulating of the Former President, John Mahama describing a scene of Security operatives as an occurrence at the funeral ceremony of our late loved one.”

According to the statement, “the family will like to put on record to the international community whom he addressed with the video, that there was no such activity at the funeral ceremony.”

It stated that “the funeral of our late brother was organized successfully without any casualties and we find this distortion very surprising.”

DGN Online’s independent checks earlier before the family issued its statement, revealed that Lance Corporal Daniel Tieku, who was with the Special Weapons and Tactics Unit (SWAT) of the Ghana Police Service was killed in July 2018 whilst onboard a Sprinter Bus with other police officers.

DGN Online’s findings suggest that the Sprinter Bus was registered AC-644-15 and was attacked in July by the armed robbers wielding guns at the outskirts of Ayirebikrom.