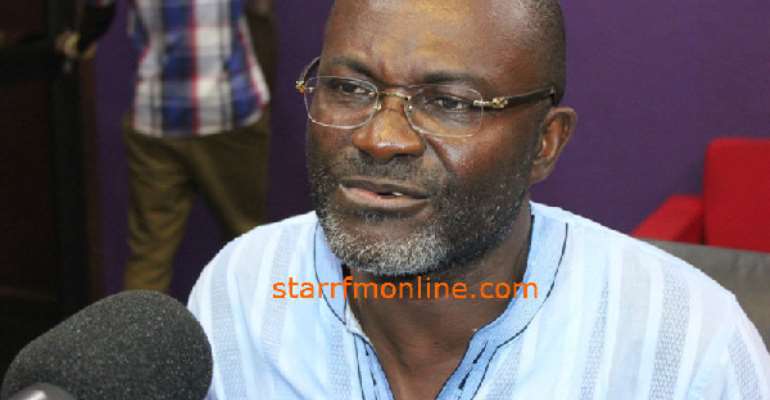 A concerned citizen, Benjamin Kwame Amankwa has asking Parliament of Ghana to gather the courage and punish the NPP's MP for Assin Central, Kennedy Agyapong for his public conduct regarding the assassination of the investigative journalist Ahmed Hussein-Suale.

According to him, Kennedy Ohene Agyapong has become a scar on the conscience of the Ghanaian parliament.

"The inability of Parliament to haul their own member before the Privileges Committee and punish him for conduct unworthy of a public servant has cast doubts on the fairness of the institution of parliament," he noted.

Mr. Amankwa indicated that it is time that Parliament gather the courage to punish Kennedy Agyapong for the bad show of leadership or face the wrath of Ghanaians.

Kennedy Agyapong incited violence against 31-year-old Hussein-Suale and splashed his photos on his TV station Net2 TV and social media after the Number #12 undercover work compiled by Tiger Eye that exposed the ills and corruption in Ghana football.

Even though Mr. Agyapong has denied involvement in the killing of the journalist, his critics including the Minority Caucus in parliament, have accused him of being a complicit.

Several organisations and individuals have called for his arrest and further prosecuted in his alleged murder of the investigative journalist since his conducted amounted to abetment of crime.

Hussein-Suale was shot thrice on Wednesday night at Madina, a suburb of Accra while driving home around 10 p.m.

The conduct of Kennedy Ohene Agyapong has called into question the quality of some individuals we elect into the parliament of Ghana.

Indeed, I must be quick to add that we have some smart and intelligent folks in parliament.

The inability of parliament and parliamentarians however to haul their own member before the previlages committee and punish him for conduct unworthy of a public servant has cast doubts on the fairness of the institution of parliament.

We were all in Ghana when various individuals and personalities were hauled before parliament for as they termed it "contempt of parliament".

It is a reversal of fortune and justice that claiming to be one of the richest men in Ghana, Kennedy Agyapong can use his questionable wealth to disturb the peace and tranquility of ordinary Ghanaians with impunity.

Kennedy Ohene Agyapong has become a scar on the conscience of the Ghanaian parliament. It is time that parliament gather the courage to punish Kennedy Agyapong for conduct unbecoming of a public servant or face the wrath of Ghanaians and lose its lustre.

Infact, many at this juncture, will be tempted not to regard parliament as an institution capable of protecting the rights and liberties of ordinary Ghanaians.

It is worth noting that, when an elder fails to behave as expected of him, a child can poke his hands into his eyes.

From inciting one ethnic group against another to inciting the public against Anas and his team which is an offence as spelled out under article 20 of the constitution of Ghana, the menace of Kennedy Agyapong grows daily.

As a law abiding citizen of Ghana, I call on the Ghana Police Service, the CID, and the powers that be to look into the penchant of Kennedy Agyapong to forment trouble in Ghana.

It's better late than Never!

A citizen of Ghana