Re: "Northern Youth Association Calls For Restoration Of Peace And Removal Of Defense Minister" 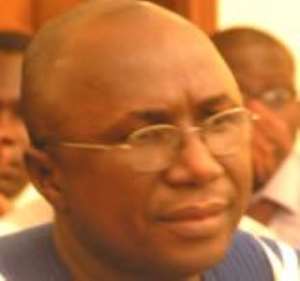 Movement for Nkpakpaando,a Konkomba Development Youth Movement wishes to express our disappointment on a call by an anomic and a fictitious group calling itself Northern Youth Association for the removal of the minister of Defense ,Hon.Dominic Nitiwul from office. We do not only see this as a tactics used by invicible individuals with parochial interest but a group of political opponents and foes to the defense minister. The said group is a non existing one and only place this call out of hatred for the Defense minister who is a Konkomba by ethnicity.

We want to state that we are equally calling for the restoration of peace in Cheriponi but we do not in any way support the idea of removal of the defense minister from Office.... we want to ask the NYA the following questions?

1.Why are they blaming the Defense Minister? During a conflict of this nature,how can a defense minister influence the military to support one side? Is the defense minister the President of the republic who is the commander in Chief?

Did the military in Cheriponi not kill Konkomba ethnic group members?

How many Konkomba communities are spared from being set ablaze?

Is the defense minister the minister of interior who is directly responsible for issues of this nature?

Is the Defense minister from Cheriponi District or Saboba and should have interest in the conflict at Cheriponi to engage such unethical acts?

How can a defense minister of a nation direct Military to do whatever he wants?

Are those military fools to obey a minister than the Commander in Chief of the armed forces?

We want to also tell the group that,the assertion that Konkomba attacked Chokosi community unprovoked is false,if they do not know what sparked the conflict ,we want to school them here:

The conflict is a renewed clash,the previous one took place in 2018 and in it two Konkomba ethnic group members were killed and buried,now some Chokosi Youth who had gone to Nigeria to work for motor bikes returned home and went to the tombs of where those 2 Konkomba victims were buried for a reason known to them alone and when they were confronted on why they went to do there without permission, they violently reacted to the relatives of the dead victims, which resulted into quarrels and when they went home to report this to their Chokosi counterparts, they quickly mobilized and armed themselves and ambushed by the road ,now it happened that some Konkombas from Saboba were travelling with a motor king to catch the pigs they had bought for the new year celebration so those Chokosis ambushed open fire on them wounding them seriously,Konkombas initially reported this to the police but no immediate action was taken....They therefore reacted with a reprisal attack leading to the burning of the Chokosi community.

All of these things happened without the defense minister's knowledge because he does not come from that area.

The lies and falsehoods perpetuated by the Northern Youth Association can only be described as a hatred and envy for the Defense minister because he is a Konkomba.

We also call on the President to disregard those calls because it is purely borned out of hatred with political antagonism.

The Defense Minister is known to be a kind,fair and a just man who has no any bad mind towards anybody in the North.

The following is the press release:

"The media, fellow Ghanaians ladies and gentlemen,the leadership of the movement for Nkpakpaando is disappointed in the leadership of Northern Youth Association especially the President who signed a petition tagging the defense minister in the current clashes between the Chokosis and Konkombas that we expected them to be singing peace songs rather than calling for the removal of the Defense minister.

If the Northern Youth Association really understands processes of how security matters are handled, then we expected them to be asking for the Removal of The Disec Chairman (The Cherepuni DCE and The Resec Chairman the Regional Minister) these two persons mentioned should have been removed by the President of the Republic of Ghana immediately because in terms of security issues the DCE and the Regional Minister are the persons responsible for internal security and not the defense minister.

The President of Northern Youth Association ( Mr. Atindande Amos) must be called to order by the state agencies because if really what we saw and read was really the petition he signed he is a threat to the security in the Region.

The Movement for Nkpakpaando leadership is therefore Calling on the Leadership of Northern Youth Association and their members that their press release today 05/02/2019 is premature and lacks peaceful resolution mechanisms. we are all calling for.

The President of Northern Youth Association must not mention the Defense minister's name in this case.

We the therefore calling for peace and nothing else but if he the President of Northern Youth Association is directing his issues he must know the quarters he will send them to.

Finally, the leadership is charging the security to be professional and eschew the atrocities meted out to civilians.

May Peace return to CHERIPONI