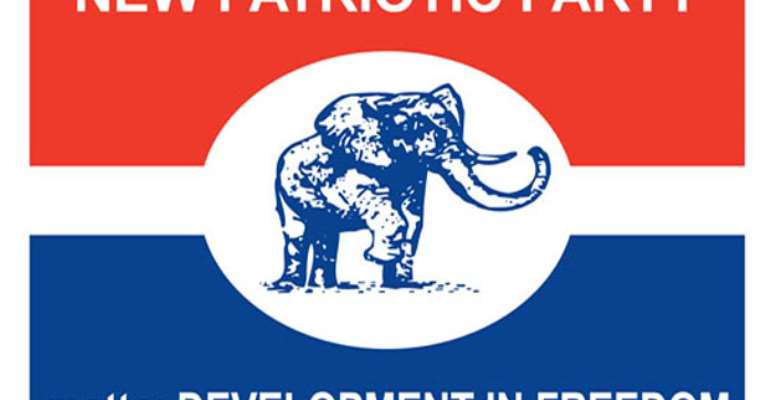 Normally, one must not wash his or her dirty linen in public. Family issues are settled at family homes but when reasons fail to prevail, such issues must be made public. The sages say 'once bitten, twice shy'. It happened to the New Patriotic Party (NPP) in the run-up to the 2008 general elections, which led to the party losing the elections to the NDC. It has started again and if it is not nipped in the bud, trouble awaits the NPP in 2020. It is good it is happening now because something can be done about it rather than waiting for it to escalate and burst into pieces.

The rivalry and infighting between some Metropolitan Municipal and District Chief Executives (MMDCEs) and some parliamentarians who belong to the same party in government is becoming a nuisance. Immediately the NPP came to power, the party issued an order that any MMDCE who wants to contest any sitting Member of Parliament (MP) must resign three years before the party goes to congress to elect parliamentary candidates. That order was welcomed by the rank and file of the party because we all saw what happened in 2008 when sitting MPs had tough times with MMDCEs who were on the grounds and worked so hard to unseat their respective MPs. After the order, no MMDCE resigned which indicated that they would not contest their respective MPs. In fact, it stands to reason that the MMDCEs will work with the sitting MPs to maintain the seats and if possible increase the number of votes the president had during the last elections.

My very dear and cherished reader, permit me to give you one example of what happened to the NPP in 2008 at one particular constituency – Nkoranza South in the Brong Ahafo Region. The sitting MP who was also the Deputy Minister of Education was called Kwame Ampofo Twumasi and the District Chief Executive (DCE) was called Appiah Awuah. From the very day they were sworn into office, they locked horns. On several occasions, some members of the National Executive went to Nkoranza to settle whatever differences they had and a day after they left, the rivalry between the two continued. The then constituency executive members took sides and fanned the flame to the extent that even when the DCE bought four motorbikes for the constituency executives to be used for the 2008 campaign, the executive members rejected the motorbikes and returned them to the DCE.

During the 2008 electioneering campaign, the DCE went his own way to campaign with his team while the MP too went his own way with the constituency executive members to campaign. While the DCE was campaigning for candidate Nana Akufo-Addo, the MP was campaigning for himself to be elected to go to Parliament again. At the end of the day, the MP lost and Nana Addo too lost in the constituency and the NPP also lost that general election bitterly. As I am writing this piece, the two protagonists who refused to see each other's face are now retired teachers. The former MP has since remained in Accra while the former DCE also remains in Kumasi where he was teaching at Prempeh College before he was made the DCE of Nkoranza South. To add insult to injury, the supporters of the NPP in that constituency would not touch any of them with even a long stick. I can give you many examples of such scenario but that is not my mission today. Indeed, you the reader can also tell your experience which was similar to what happened at Nkoranza South Constituency.

It seems to me the NPP people are not good historians. They fail to look back like historians do so that they will not fall into the similar pit some people fell in. The NPP lost the 2008 elections because of complacency. In many constituencies, some MPs and their respective MMDCEs are at each other's throat and tearing the party apart. The so-called Council of Elders and Constituency Executive members who are supposed to stay neutral and settle matters amicably have also taken sides. MMDCEs are not given the peace of mind to do their work, as MPs sit on their necks. They incite constituency executive members to write petitions after petitions against the MMDCEs, calling for their removal from office.

I was in one constituency to observe the 34th Farmers' Day celebration when I saw the MP leading his supporters to greet the guests and chiefs and a few minutes later, the DCE too arrived with his own delegation to greet. Both groups did not sit together at the high table. When I enquired from one guy who was sitting near me why the same people from the same party were behaving that way, he told me that the MP and DCE do not see eye to eye with each other and that the MP is to blame because he wants the DCE to breach the procurement law but the DCE refused to play ball.

Some of the NPP parliamentarians are not smart enough. Instead of working together with their MMDCEs to enhance the chances of the party and themselves in the 2020 general elections, they think attacking the MMDCEs will rather make them popular and make the MMDCEs unpopular. In case they win their primaries, they will have their pictures on the ballot papers and surely not the MMDCEs. These MMDCEs are always with the people, inspecting projects executed by the assemblies and interacting with the common man on the streets. As lawmakers, the MPs only come to the constituency once in a blue moon. It is the MMDCEs who will help them win back their seats easily. It is not all funerals and invitations that the MP will always have time to attend but the MMDCE is always there, donating money on behalf of the MP and the party. But if you are an MP and you think the MMDCE does not matter in the scheme of things, you are doomed. It is during the primaries that the MP will realize the power of the MMDCE. Even though the MMDCEs may not contest you at the primaries, they can throw their weight behind your opponent and you will surely lose.

Why Two Elephants Must Not Fight

There is a popular saying in Akan that when two elephants fight, it is the grass that suffers. These MPs must be told that before they entered the House of Parliament, it was the people who voted for them. Some people laid down their lives during the electioneering campaign and others too were brutalized and maimed. People spent their monies and others worked for the party with empty stomachs. MPs can choose to neglect the people who voted for them but they should spare us the pain of going into opposition. I, your irrepressible and indomitable Earth Angel Gabriel, want to serve notice that if these troublesome MPs continue to misbehave, I am going to take them on individually, damn the consequences! And they know what I can do. In fact, I am going to expose them to public ridicule and pave the way for anyone who will contest them during the primaries to scale through. If that time comes, nobody should say notice was not served by God's own messenger.

The ordinary NPP supporter who stood in the sun to vote for the party to come to power did so because he or she believes the NPP can deliver Ghanaians from the tribulations that we went through when the corrupt National Democratic Congress (NDC) held the country to ransom. Two years into the Akufo-Addo administration, Ghanaians have come to know the difference between the NDC and the NPP as far as the introduction of social intervention policies are concerned. We will not sit down for a few MPs to turn the apple cart upside down. We don't care if they drive past us in their flashy V8 cars but we care if they try to introduce infighting in the party. What is most annoying is that some of these troublesome MPs were domiciled abroad when the NDC was in power and so they did not experience the pain that we went through. They came down with monies they earned, working abroad to grab the seats and are now playing the buffoonery. If the NPP loses the 2020 general election (God forbid!!!), these MPs will fly back to their bases, leaving us to suffer here in Ghana once again under the “Incompetent One” who is fighting tooth and nail to come back to power to continue with the plunder.

Everybody, including the NDC supporters, has come to realize that the country is on her way to rise up again like Barbarossa. There is no going back again and the President and his team are working so hard to bring back the glorious days. Only an idiot will argue that the free SHS, a social intervention policy, is being enjoyed by only children of NPP members. And no Jupiter can tell me that the Planting for Food and Jobs programme which has led to a bumper harvest of food crops is being enjoyed by only NPP supporters who go to the market to buy food items. I believe, and in fact, many Ghanaians believe that if the NPP rules this country for eight years, Ghana will not be the same again. As for the ugly noises being made by the NDC, Ghanaians should give them a long rope because eventually they will use that same long rope to hang themselves. Empty barrel makes the most noise, says the wise man.