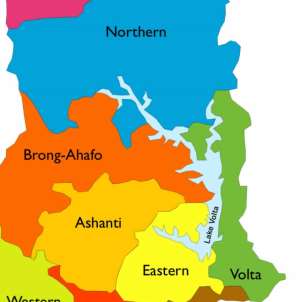 I swear, perhaps by the moon and the stars in the sky that Ghanaians must not take the velvety of Mr. Dan Botwe’s personality and President Akufo-Addo’s beguiling posture as a libertarian par excellence to hide the fact that creating new regions based on ethnic and cultural considerations is excessively vacuous and hollow relative to the basic tenet of Ghanaian spirit and nationalism proudly espoused by Osagyefo Kwame Nkrumah of blessed memory. Every genuine historian and nationalist must be in the throes of irremediable consternation over the penchant for creating new tribal regions in Ghana.

Per the recommendations of Justice Allan Brobbey’s Commission, the government of Ghana is on the cusp of creating six additional regions to the existing 10 provinces. Ghana is a unitary state [A state wherein the central government (composite power) have an authority to make decisions for provincial and district component governmental units], and some of the reasons provided by the afore-cited commission for the creation of the new regions did not only mislead Akufo-Addo led New Patriotic Party [NPP] government but also, remains a rebuke to national integration and inter-ethnic cohesion conspicuously stated in the 1992 constitution. Chapter 6 (a) of the foregoing constitution entreat the government to “foster a spirit of loyalty to Ghana that overrides sectional, ethnic and other loyalties.” Based on the above constitutional provision, it defies logic to encourage any mercurial members of the commission to tether the national integration as enshrined in the constitution with a parochial ethnic and tribal bigotry akin to the prevailing situations in the country that motivated President Nkrumah to pass the avoidance of discrimination act. This somewhat illuminates why I think the following recommendations of the new regions commission are far cry from logic.

To advice, the president to create a new region within a unitary state on ethnic and cultural grounds lacks merit. For example, how many districts and towns do we have in the Ahafo to warrant the taxpayers’ money to create a new region for them? All over the globe, integration is seen as a recipe for development. This partly explains why organizations like pan-Arabism and pan-Africanism entreating all people of Arab origin, and all people of African origin respectively to see themselves as one people exist. In 1950, President Gamel Abdel Nasser of Egypt embraced the idea of pan-Arabism which existed as early as 19th century AD. W. E. B Du Bois, an African American, Henry-Sylvester Williams, a lawyer from Trinidad and Marcus Garvey of Jamaica wanted all Africans in dispersion and Africans on the continent to unite. There is another political movement known as pan Latinism encouraging all Latinos’ to see themselves as one people. If after 60 years of independence, we still see ourselves as Ahafo, Bono, Asante, Safwi, Gas, Dagates and Ewes but not Ghanaians we still have billion years ahead of us to accomplish our national glory. Highly unacceptable! Is it not hypocritical to describe European separatists as racists and white supremacists while a commission of inquiry thinks scarce resources must be channeled into creating a needless region like Ahafo comprising only four big towns, Goaso, Bechem, Mim and Duayaw Nkwanta.

Whence from this cultural consideration when all the Ahafo Chiefs for example already pay allegiance to the golden stool? Bono and Ahafo languages are mutually intelligible, and if they must not co-exist in one province for administrative purposes then national integration my foot! I am both Bono and Asante, and if I must be treated as a pariah as a civil servant in the northern or Volta region then what is the proud essence of Ghana’s sovereignty? If Brong Ahafo is too big to be regionally governed single-handedly, why not splitting it into two rather than creating a new region because Ahafo people want separation? In addition, it is risible to think that creating new regions will bring development. Brobbey’s commission members must be dragged before parliament to defend their frivolous reasons for creating regions based on cultural and ethnic grounds. Anybody privy to a historical rendition of inter-ethnic tensions in Ghana or horrifying tales of the Hutu and the Tutsi carnage in faraway Rwanda would not recommend tribal regions.

The constitution of Ghana does not permit the regional minister to undertake development projects because provincial administration is bereft of governing structures. The minister of local government and M/DCEs are responsible for metropolitan, municipal/district assemblies’ development. Per Article 241 (1)“For the purposes of local government, Ghana shall be deemed to have been divided into the districts in existence immediately before the coming into force of this Constitution.” Also, Clause 3 of the foregoing article states: “A district assembly shall be the highest political authority in the district, and shall have deliberative, legislative and executive powers.” Article 245 (1) states: “Parliament shall, by law, prescribe the functions of district assemblies which shall include (a) the formulation and execution of plans, programs, and strategies for the effective mobilization of the resources necessary for the overall development of the district; (b) the levying and collection of taxes, rates, duties and fees. On the other hand, the Constitution assigns only a couple of vague functions to a regional minister; that is, he or she shall: (a) represent the President in the region, and (b) be responsible for the coordination and direction of the administrative machinery in the region (Article 256 (1)), ( Source: Dr. Samuel Duh, August 6, 2018, graphic.com.gh). This means that those hoping new regions will bring development pasted their butter at the wrong sides of their bread.

Another frivolous recommendation of the commission is that the referenda must be held in the affected area in conformity with the 1956 plebiscite. There is no scintilla of correlation between the 1956 plebiscite on the Ewe Question and the referenda for the new regions within a unitary state. In the first place, 1956 referendum to decide whether Trans-Volta Togoland (TVT) comprising some parts of the modern Volta and northern regions of northern Ghana was organized under the UN trusteeship council. The UN charter created the trusteeship council as one of the many branches of the organization. The above organ was in charge of supervising the administration of Trust territories under the trusteeship process. The goal of the trusteeship council was among other things to ensure the advancement of the inhabitants of trust territories and their progression toward political autonomy.

The trusteeship council was abolished in November 1994, a month after the last territory under the council, Palau gained independence. Palau is an archipelago [group of islands] in the western Pacific Ocean. TVT was a trust territory of the UN. Therefore, the affected territories voted alone because they were to correct their ambivalences: whether to join would-be independent Ghana or future independent Togo. This referendum was totally different from allowing a group of individuals fighting to have their own region based on flimsy excuses like ethnic and cultural differences!

Economically, there is no statistical data to validate the claim that the smaller the region the greater the development! Why must the densely populated Ashanti region be richer than relatively smaller regions like central and the two upper regions? Lee Kuan Yew, stated in his book, “From Third World to First: The Singapore Story, 1965-2000” that Nigeria’s enemy to development was the deep ethnic and tribal cleavage. If a big country like the Republic of South Africa with about 55 million population could develop with nine regions, Ghana does not need 16 regions to develop. Nkrumah created those regions with his Americophile conviction of making each region a melting pot of diverse cultures. By concurring with the chiefs of Ahafo to create a needless region based on tribal and cultural considerations, Brobbey’s commission declined to put a face on tribalism. There must be no gainsaying about dragging the committee members to parliament explain what they mean by ethnic and cultural considerations. Use the New region resources for rail transport development to connect all cities. God Bless Our Homeland Ghana.

The author has 160 publications published on Modern Ghana.