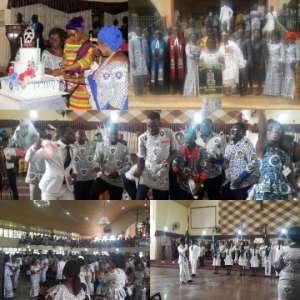 The 25th Anniversary Celebrations of the Presbyterian Church of Ghana - Victory Congregation at Frafraha in the Greater Accra Region, has been climaxed in a grand style.

The celebrations, which was launched in January this year, was climaxed with a colourful celebration on the theme: 'Celebrating God's Grace and Faithful Stewardship'.

At the ceremony, a clarion call was made to Christians to renew their commitment to the calling of God to serve as stewards.

Speaking on the theme, Rev Dr Victor Okoe Abbey, the Chairperson of the Ga Presbytery called on Christians to renew their commitment towards God to become faithful stewards of the gifts, talents and resources given them.

He said for the Christian, the end of everything is the glory of God adding that, 'everything God has given you is a means to an end but not the end itself'.

He said Christians ought to always examine themselves on how they had used their talents and gifting and be sure that they were being used efficiently and effectively to bring glory to God because the day for accountability would soon come.

Rev Abbey said Christians ought to recognise that time, talents, energy, resources, and the affection to do things perfectly belonged to God and had been given to be used profitably to the glory of God.

He said in the finality of things, as stewards of the blessings of God, 'We shall all account for the gifts God has given collectively as a Church and as individuals'.

He urged Christians to extend their stewardship outside the four walls of the Church premises to everywhere they found themselves.

Rev Abbey said if all Christians had been faithful stewards at their various workplaces, many of the problems faced by the country would not be in existence.

He therefore stressed that Christians ought to rise up and become faithful stewards in their professions to bring glory to God.

She commended the Congregation for being steadfast for the past 25 years with sharing the Gospel and for the feat achieved so far for the Lord saying that the story of the Victory Congregation is a case study in Church growth.

The Chief Justice, who was born and bred a Presbyterian, said the Church's flagship programme 'Victory Business Summit and Fair' was something other churches could emulate because it had helped in propelling individuals and small scale enterprises to higher levels.

Rev Col David Adoteye-Asare, the Frafraha District Minister and the Minister in charge of the Victory Congregation said to help the Church achieve its purpose, a full-time Coordinator had been appointed for a proactive Mission and Evangelism Ministry.

He urged the congregations to continuously be watchful, committed and consistent in attracting, accepting, winning souls for God.

In an interview with Mr Samuel Gyekye-Mensah, the Anniversary Planning Committee Chairman, he said the launch of the anniversary in January paved way for several activities including donation to the Mampong School of the Deaf, Family Day out, revival among others.

He said it was the ambition of the Church, which started in 1993 with 12 members but now has more than 3,000 members, to rise from the status of a District to a Presbytery in the next 10 years.

The 25th anniversary celebration was also characterised with the cutting of the anniversary cake and family get together after service at the Church premises.