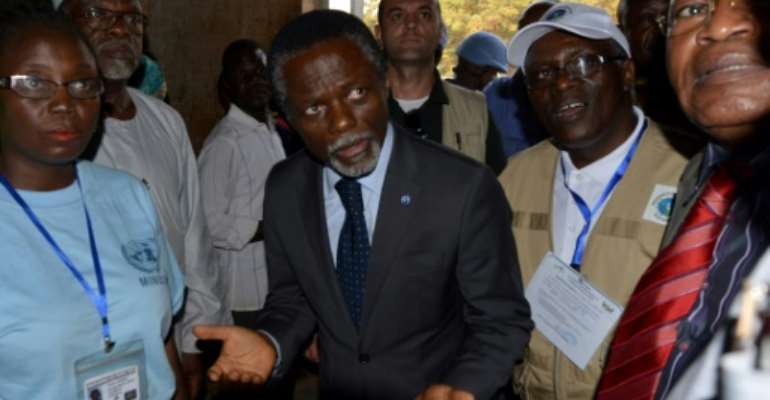 The UN Special Representative for the Central African Republic Parfait Onanga-Anyanga (C, pictured December 2015) said they are "making all possible efforts to prevent outbreaks of violence," but the efforts "are not enough". By ISSOUF SANOGO (AFP/File)

The UN Special Representative for the Central African Republic on Friday conceded the "inability" of the mission he heads to prevent attacks after at least 60 people were killed in the centre of the violence-wracked country.

"We are making all possible efforts to prevent outbreaks of violence of this nature" but "we find these efforts are not enough," Parfait Onanga-Anyanga said following last week's clashes between Christian and Muslim-dominated militias in the central town of Alindao.

An internal UN report said the death toll from the bloodshed was at least 60 after violence flared on November 15 between Christian militiamen, known as anti-Balaka, and the Union for Peace in CAR (UPC) Muslim militia.

Onanga-Anyanga said the UN's MINUSCA mission wants to broker a dialogue between both sides.

But he admitted the UN presence's "inability to prevent violence of this nature" as it was not a "sufficient deterrent" with barely 40 peacekeepers stationed in a town of some 30,000.

Ngon Baba slammed "the indifference of certain contingents in the face of aggression against the population," a comment appearing to allude to persistent rumours that the sympathies of some MINUSCA members lie with certain armed groups.

The sectarian violence in Alindao saw the local church, a convent and a camp for displaced people torched. Pictures seen by AFP showed charred bodies.

The town, which saw more than 100 deaths in clashes in May last year, lies on a critical route traversing the south and east of the country in the heart of a region with numerous gold and diamond mines that have helped fuel conflict.

Some 20,000 people affected by the fighting have fled to the south of the city, according to the UN report.

Alindao has long been the base of UPC, one of the main groups in the former Seleka coalition which overthrew the regime of Francois Bozize, a Christian, in 2013.

The CAR is one of the world's poorest nations despite a rich supply of diamonds and uranium.

Ngon Baba also demanded the lifting of a UN arms embargo imposed on the CAR in 2013, saying it was counter-productive when militia groups were "constantly stocking up on arms and munitions."

In contrast, "confronted by the consequences of the embargo, CAR forces cannot adequately fulfil their missions."

The embargo forbids the CAR from procuring arms and munitions, although Russia won an exemption last year while France recently announced a delivery "strictly within the terms" of UN limitations.

China has requested an exemption but has yet to be granted one.

CAR authorities have been calling for the embargo to be lifted since Faustin-Archange Touadera assumed the presidency in 2016.