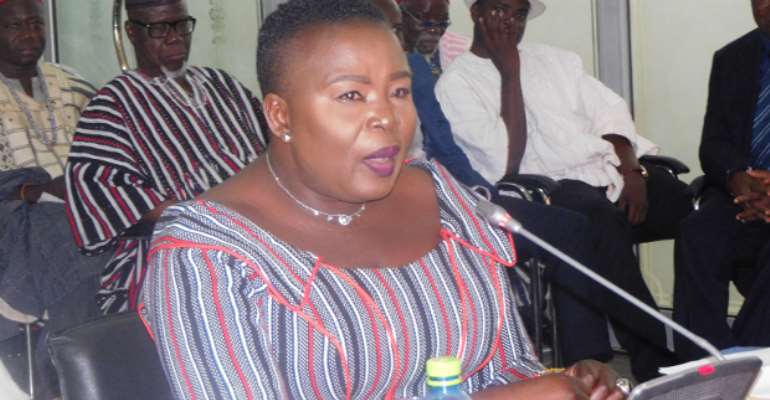 The UER Minister-designate speaking during the vetting

The Minister-designate for the Upper East Region, Paulina Patience Abayage, has told the Appointments Committee of Parliament that the New Patriotic Party (NPP) government is committed to revamping the defunct Pwalugu Tomato Factory and Zuarungu Meat Factory in the Upper East Region because they hold the key to the economy of the region.

According to her, a Ghanaian investor in the United States has indicated his preparedness to invest $40 million to revive the two defunct companies whose viabilities are being assessed by a committee set up by the outgoing regional minister and led by one Prof Mila.

Speaking during her vetting at the Appointments Committee last week, the regional minister-designate said the intention of the NPP government is to make the Pwalugu Tomato Factory a vegetable and fruit processing factory, while the Zuarungu Meat Factory would be converted into an abattoir complex to help create more employment for the people in the region where varieties of vegetables and fruits are grown.

“We produce fruits and vegetable in abundance in the region and these could feed the Pwalugu Tomato Factory,” she said, adding that the Ghanaian investor had been in the country to hold preliminary talks on the possible infusion of the said amount into those companies to let them start working again.

Commenting on the perennial flooding of the region as result of the spillage of excess water from the Bagri Dam in Burkina Faso, the minister-designate who is the current ambassador of Ghana to Italy said the only solution to the problem is for Ghana to also build a modern dam on the White Volta River in the region to help hold back the excess water and use it for other purposes.

She indicated that the construction of a dam on the White Volta would also help create employment and also provide extra electricity for the nation.

She said she would use her contacts as the ambassador of Ghana to Italy to attract a lot of investments into the region particularly in the area of tourism and artifacts.

She disclosed that all the women who are into basket weaving would be assisted with soft loans to expand their businesses, adding that she would also use the social media and mainstream media to promote colourful festivals of the people in the region to help promote tourism in the region.

She noted that in the Builsa South District of the region, there are a lot of people in the cultivation of rice and would therefore push for rice mills to be sited in that part of the region for the processing of local rice.

She pointed out that as a woman she would fight for the rights of women in the region and help stop the early child marriages in the region through advocacy programmes, and also promote girl-child education.