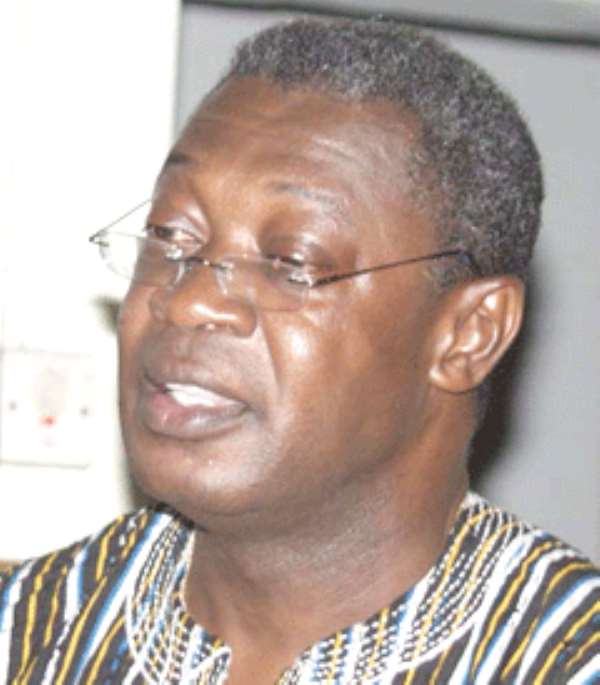 Accra, Nov. 2, GNA - Professor Agyeman Badu Akosa, Director-General (DG) of the Ghana Health Service (GHS), Wednesday said there was no scientific proof that ginseng, bitters and other products peddled in the media and sold over the counter (OTC) as aphrodisiacs could treat sexual dysfunction.

He said: "there have been some experiments reporting a sexual response in animals treated with ginseng, but there is no evidence whatsoever that ginseng has an effect on human sexuality." Prof. Akosa therefore, cautioned unsuspecting users of ginseng and other products on market claimed to be aphrodisiacs to wise-up and stop for their own good, saying that those products were not only ineffective but could be dangerous and fatal as well.

He was speaking to journalists in Accra at a press conference to mark the beginning of the GHS month celebration, under the theme, Healthy Lifestyle, Healthy Living.

Prof. Akosa recommended good diet, a regular exercise programme and a good mental state as more dependable paths to better sex than the various products such as goats eye, deer sperm, snake urine or gall bladder, frog legs, ginseng, Spanish fly, tiger bone and rhinoceros horn and alcoholic concoction being peddled as sexual enhancers. He noted that in Ghana, the quest for aphrodisiacs had created a boom in the bitters and OTC industry where every plant part were soaked in alcohol from the bark, roots to sprouting to make concoctions claimed to be aphrodisiacs.

"Because sexual problems can be caused or worsened by psychological stress, a moderate drinking might seem like a sexual enhancer and so the alcoholic content of the so-called aphrodisiac bitters is what make people think those concoctions have some medicinal potency," he said.

Prof. Akosa said in effect, many Ghanaians drink a lot of alcohol all in the name of aphrodisiac, adding that for want of sexual enhancer many Ghanaians were being led by commercials and good marketing practices to become alcoholic.

He warned that aphrodisiac experimentation was not just a rip-off but could be deadly as well, saying that one popular aphrodisiac was Spanish fly, which causes a rush of blood into the genitals but was also a poison that burned the mouth and throat and could lead to genitourinary infections, scaring the urethra, and even death.

He said the deception about the aphrodisiac qualities of ginseng, the various bitters and others used in other parts of the world like tiger bone, rhinoceros horn, snake bladder and snake urine, stemmed from over 5,000-year old traditional beliefs of the people of Asia, which were not founded on scientific proof.

Prof. said ginseng in particular was a word which meant "man root" and its reputation as an aphrodisiac probably stemmed out of it semblance with the human body, adding that the tiger bones, rhino horn and oysters also passed as aphrodisiacs because they had the shame of the male sex organ.

He said chillies, curries, and other spicy foods had been viewed as aphrodisiacs because their physiological effect of raising heart rate and sometimes sweating, were similar to the physical reactions experienced during sex.

"Some foods in the past were rated as aphrodisiacs based on their rarity and mystery. While chocolate was once considered the ultimate aphrodisiac, the reputation wore off as it became commonly available," he said.

He noted that in pursuit of sexual success and fertility, the moon and everything under it had been touted as aphrodisiac by some persons or culture love portion peddlers stopped at nothing to sell their sexual wares to unsuspecting buyers.

"Despite the lack of scientific evidence of safety and effectiveness these fraudulent OTC love portion industry thrives to this day and people continue the optimistic quest for drug-induced sexual success," he said.

Prof. Akosa said an aphrodisiac was a food, drink, drug, scent, device or products that promoters claim could enhance sexual performance, named after the Greek goddess for sexual love and beauty, Aphrodite.

He however, stated that a medical doctor could diagnose a sexual problem and recommend treat and if necessary prescribe a drug to treat the dysfunction.

"While physiological factors such as anxiety and depression can lead to sexual dysfunction, more than 85 per cent of impotence cases have a physical cause according to the Impotence Institute of America and some diseases such as diabetes, arteriosclerosis (hardening of the arteries) and high blood pressure," he said

He said impotence had reportedly been caused by 16 of the 200 most commonly prescribed drugs, including drugs for high blood pressure, heart disease and depression.

He mentioned testosterone replacement therapy as a prescription option for men whose testosterone level was not within the normal range, but warned that the serious potential side effects called for physician's supervision.

COVID-19: Ridge Hospital allowed us to bath our infected dea...
1 hour ago