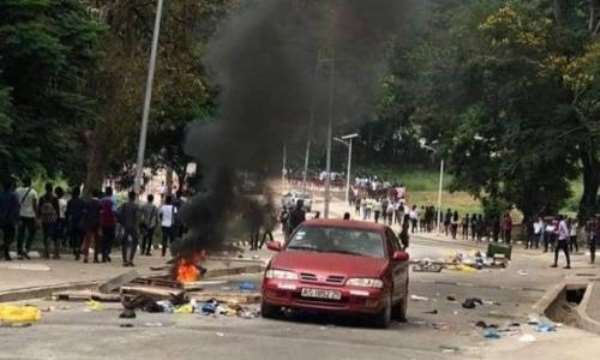 If l were student at KNUST today and confronted with similar sequence or set of events, perhaps l might also have used violence to react to the university authorities’ so-called draconian methods toward the students’ concerns. And why not use violence to destroy the poor Ghanaian taxpayer-funded institutions that the students are occupying temporarily to use to gain some knowledge to help themselves and the general public as a whole? It is simply because the students can get away with that kind of destructive behavior in the name of “university tradition” or call it “Aluta Continua” tradition. More so, think in the broadest sense as Ghanaians and many of our selfish attitudes toward state or public properties and resources.

On top of that average university students in Ghana see themselves as special group of people on the apex of the education food chain. In other words, as learners in the tertiary end of the educational journey, the students, especially the males in the public universities, have been acting on their respective campuses as if the society rules/laws do not apply to them as “privileged” groups. The result is that over the years some students’ leaders have used the university campuses as the launching pads for various forms of activisms: Socioeconomic, political, and internal strikes. Some of these agitations settled down peacefully, whereas others ended up in violent flames as happened on the KNUST enclave few days ago.

The saddest part of its all, suffice to say the crystallization of what appears to be decades of “national pampering” of university students, is the situation where the nation’s future leaders in the public-funded universities can take the rules into their hands out of a noble cause or just based on frustrations and wind up vandalizing school properties indiscriminately. In most cases these acts of students’ vandalism are overlooked as the students often get outpourings of supports and sympathies from the general public, including their respective old student fraternities for a “job well done.”

It is one thing to mobilize others in a civil manner within the campus to negotiate or engage the school leadership regarding some legitimate issue(s) pertaining to the students. However, it is entirely another thing for students to descend into incivility and wanton destruction of school or public property because the university authorities have taken away or threatening to implement policies that seek to modernize or undercut certain “cherished traditions” students are used to.

Sadly, the “miscalculation” the Vice Chancellor Dr. Obiri Danso and his lieutenants might have done were their well-meaning attempt to modernize some of the archaic students’ traditions in vogue at the KNUST, including all the country’s public universities. More likely, it could be that the university administration did not realize that Ghanaians in general always talk about change and progress, but it is just a mere lip-service to make them feel good. They are not serious about change, other than that they will not throw trashes everywhere and blame the government.

It is an open secret, anyone who seriously tries to effect dramatic change in any part of the country is met with resistance and demonization. It is unfortunate albeit not surprising that rather than looking at the core of the unfolding events at KNUST, a considerable number of Ghanaians led by the aggrieved students are already calling for the head of the poor VC of the Kumasi premier university to be cut off. Some of us will be so disappointed if Prof. Kwasi Obiri Danso lose his position at KNUST while Ghanaians ignore the students’ entitlement tendencies, destructive behaviors, and sheer disregard of the value of Ghanaian taxpayers’ property. If you cannot have your way it does not translate into destroying things that do not belong to you.

For those people contending that the VC must go in that his decision to change the “traditions” in the school led to the destruction of properties do not understand the basic premise of causal correlation reasoning. Average Ghanaian public university students have mindsets that inform them (mostly the males) that once they get into the campus somehow they are almost “untouchable” and that they are too smart for anyone to give them commands. From their behaviors and utterances, it is clear the striking students already knew what they were up to before any negotiation or compromise could have been struck with the college authorities.

At any rate, which of the students in KNUST didn’t know the Asantehene is the titular head or the chancellor of the university? If the students had not planned ahead that in case things didn’t go their way they would cause mayhem to school properties, how come they did not organize themselves, demonstrate all the way to Manhyia Palace, where they could have presented their grievances to the Asantehene peacefully and civilly?

As usual, the state or public meager resources were at the receiving end of the angry university students’ rampage. Ghanaians of all stripes are known for misuse and abuse of national possessions. It start from our schools and into the workplaces; this is why the incidence of corruption is high, because we don’t have respect for state institutions. Yes, in the interests of traditions or bad habitual practices as also playing out on galamsey front, a typical Ghanaian doesn’t care destroying the beauty of his or her country or public property much the same way as the KNUST students did.

Let it be stated that long-held university traditions are not hereditary; they are all learned practices; and, they can be unlearned or change into modernity. Ghanaians need to tell the students the truth instead of backing them for their irresponsibility. The truth is: University students are not special breed of people who are above the law of the land, and that their violent agitations are obsolete relics of a bygone era. In the contemporary era, if at some point in time a student is not comfortable with the university policies, he or she can transfer to another school. Thank heavens now Ghana boasts of countless universities. Stop the pampering!

Bernard Asubonteng is a US-based writer and social commentator.

A/R: Journalists on tour with Regional Minister involved in ...
21 minutes ago

Focus on promoting human rights, be swift and fair in applic...
23 minutes ago