Teenage Pregnancy: How A Daughter's Growing Belly Earns Her A Mother's Growling Slap 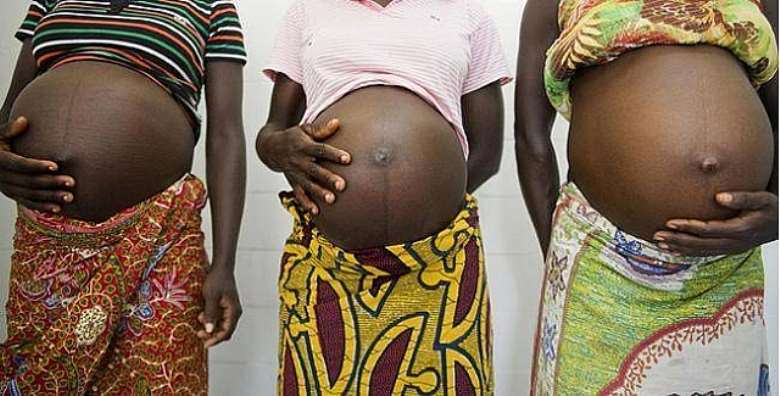 Barbara and her mother make their way through a mini squabble outside the consulting room. It's a long queue cemented with resistance, and impatience. After what seems like eternity, her mother manages to convince them that she is only returning to present test results, and that it would be brief. She promised!

Shoving her head and one half of her body through the door, she asks "Should we come?"I motion for them to walk in. She hands a couple of papers. I ran a quick glance through her chart; it is the routine for reviewing patients' history when they are returning with diagnostic reports.

Barbara, as is typical of every teen has her curious eyes trotting around the consulting room, staring at an X-Ray viewbox by my side, fascinated by a couple of wallpapers in the room, unmoved by the delays they have had to encounter at the clinic all day, or what was amiss back in school, or the numerous payments they have had to make in the past hours.

It is her mother, Doris who is unsettled. She already had to face a multitude of impatient faces, convincing them she was only presenting a scan report to the doctor. Then she's worried about what the laboratory reports could be saying. She's also worried about her daughter's absence from school the previous week due to ill health.

But I am the more disturbed one. What the test report says makes me the most worried person in the room. How terrible it is, that for many years of medical training, nobody teaches the physician how to break bad news. That lesson would have been handy now.

Cold sweat begin to collect in between my fingers as I awkwardly flip back and forth through the client’s papers. I am looking for an euphemism for pregnancy or a word that will make the word “pregnant” appear less pregnant with shock.

Barbara’s mother is still ranting about how some nurses have been rude to her in the clinic today... she never stops talking!

Much as I delayed breaking the disappointing news, it kept forcing its way out of me. The fascinating thing about secrets is that, they can't hide inside for long. Everybody has a skeleton, everybody has a closet but time has a way exposing the truth and the lies. Whatever it is we're trying to hide, we're never ready for the moment when the truth gets naked. Barbara couldn't hide this forever, how could I?

“Aunty Doris, the scan report indicates your daughter is pregnant...”, I eventually found the words and let them out like water from a broken dam.

Sixteen year old Barbara melted and sank into her seat, her mother sprung up like a spacecraft propelled into jet-speed motion.

Right before my eyes, a strong egotistical woman shrunk with fear. I looked on helplessly. The cascade of events leading her to flood the consulting room with tears was inevitable. It was like watching two cars head towards one another, knowing there’s nothing you can do. There's definitely going to be a crash. Doris crushed! An air of despondency swept through the place and the room went dead silent, one could hear a pin drop.

You guessed right! She did ask me to repeat what I said. But I couldn’t find my voice this time.

“Barbara, w’aku me!” and subtle cusses were hurled at the teenage girl, who only repeated “Maa, mepa wo kyɛw” in the most remorseful way, her knees stuck to the bare floor. Each of them, at that instance wished for death. Their worlds seem to have come to a halt. And there was nothing romantic about this joint suicide.

Barbara had become the beaten dog who bites the person that feeds it. Her mother had vouched to bring heaven on earth for her only child. Although the struggles to cater for her had been challenging, she has managed to see her through secondary education.

Doris has been a single mother, engaging in petty trade to earn a living. It has been her dream to prove her detractors wrong; that she was hardworking enough to churn her daughter into something would be proud of, someday. She had provided for the child all that she needed, gave her the best of a mother’s affection. She let her ran around like a monkey in a banana factory: with basic provisions at her disposal.

“Barbara has never lacked anything. You should see how much I spend on her each week; how much food is stuffed in her chop box... “, she wiped more tears and slammed my table!

And today the “ungrateful” girl, in whom she has trusted her hopes has thrusted mercilessly through the hymen of her dreams. Now, all that a good mother has to show is rugged, shattered dreams!

Her pain is unflatteringly plain. No woman would hold the candle of responsibility the way Doris has been doing. She deserved better. But want is one thing. Expect is another.

And as she runs an account of these struggles, a teardrop the size of her eyeball runs down her cheeks into her bosom.

The slap reverberated across the consulting room, loud enough to be perceived by the waiting group of clients outside. Barbara lost the ground under her feet, fell back in pain, both hands over her left face. She suddenly turned pale, with a look on the face that seems to suggest she has never seen her mother this livid.

It was a slap in protest to an unwanted child, in vehement hatred for whatever was growing inside Barbara’s belly. It was a smack in the face of intemperate men whose place of pleasure is in between the legs of a teenage girl; men peeping through windows, men looking for trash in treasures.

Doris had flown a blow into the face of a society whose values and virtues are now dead, a world that advocates safe sex over abstinence (because that’s our best shot), a marketplace where sex is cheapened; with little or no bargain, a world with morality thrown to the dogs.

Doris slapped you!
It is estimated that 57,000 teenage pregnancies were recorded in the first half of last year, and the Ghana Education Service reports that over 21,000 girls dropped out of school due to teenage pregnancy between 2015 and 2017. The figures are jaw-dropping and threatens a devastating tomorrow.

There are a lot more Barbaras having their future dented by unwanted pregnancies, a lot more Dorises whose efforts are likened to patching a leaking dam with a gum. As a country with special interest in girl child development, we need to fix this canker the most effective way.

In the end, Doris dries her tears and sit in solemnity. A lot of thoughts besiege her mind, a thousand thoughts are frolicking and striking against one another like ping pong balls in a lottery machine. A lot of thoughts: to gun down the man responsible for this pregnancy, to abort the poor child, to cater or not to cater for Barbara, the abruption of her schooling, the public ridicule, the scorn... the shattered dreams.

Then it dawned on me I also have a problem of my own: I had been keeping twenty-two more patients waiting for the past half hour. A lot more men, women and young children are also waiting to be told what sits in their bodies. Let's see what else we have...

“Neeeeeext!”
Author: Patrick Fynn
www.patrickfynn.com
All images and names used in this story do not reflect the true identities of the original characters