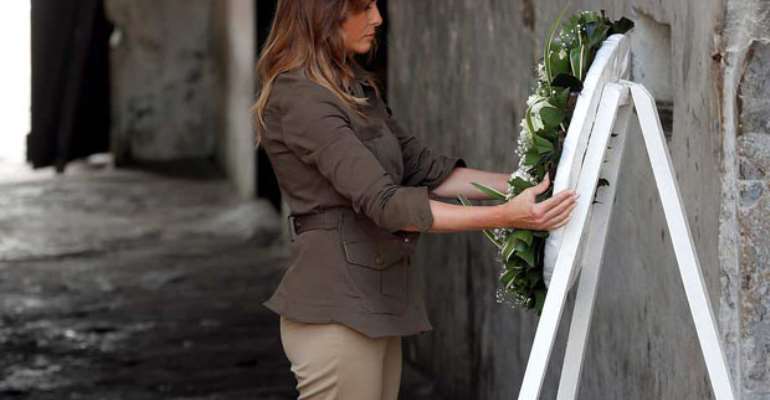 The United States First Lady, Melania Trump, yesterday paid a visit to the Cape Coast Castle in the Central Region where she was said to be very sober.

This was after she had paid a courtesy call on the Paramount Chief of Oguaa, Osabarimba Kwesi Atta II, who doubles as President of the Oguaa Traditional Council. 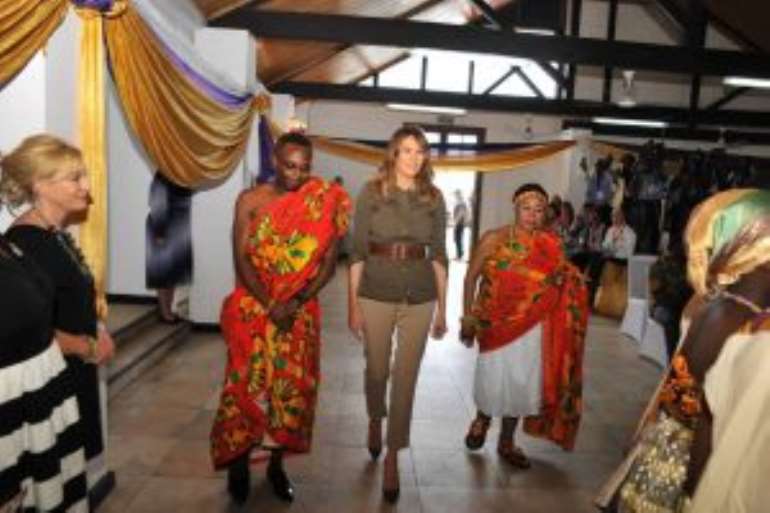 Mrs Melania Trump arriving at the Palace in the company of Mr. Duncan and a queenmother from the traditional area.

The meeting, which started around 8:45am yesterday, was held at the Obama Hall of the Emintsimadze Palace.

She was welcomed to the palace with a rich display of Ghanaian culture. 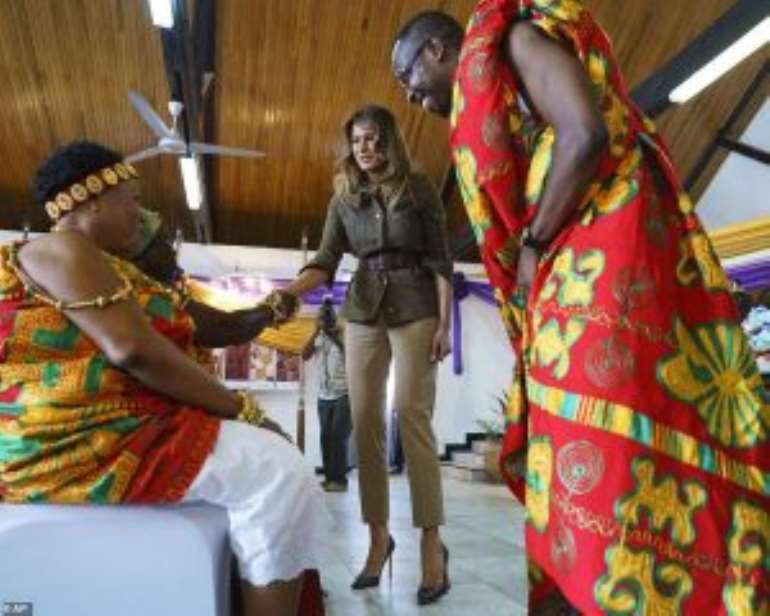 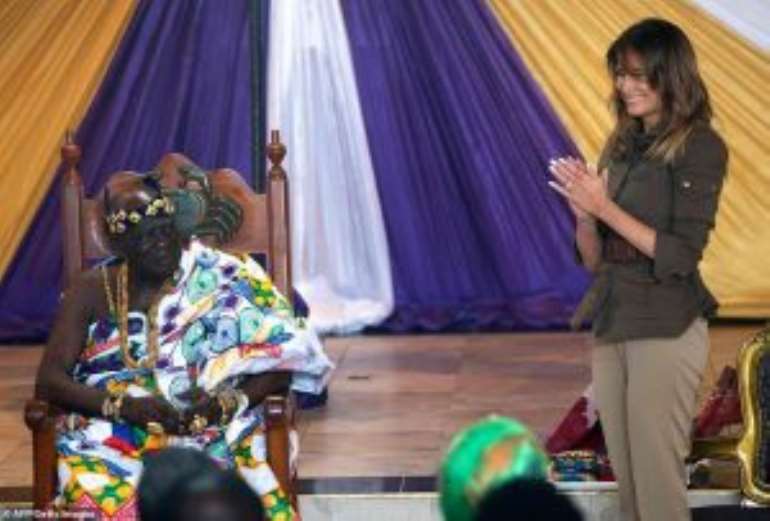 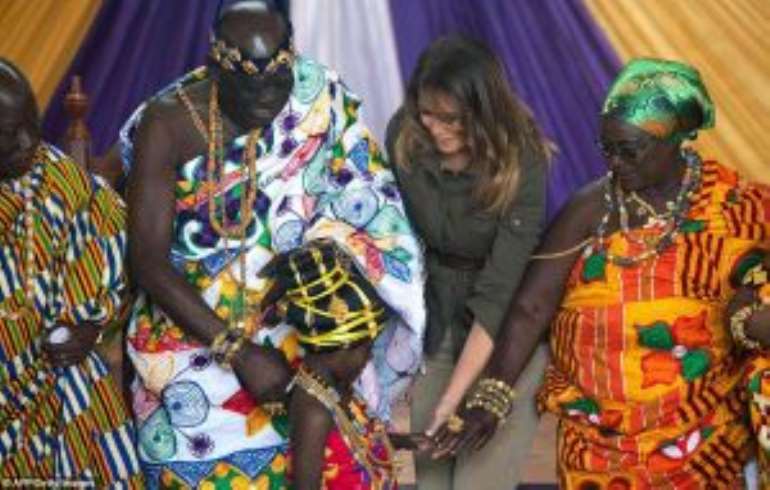 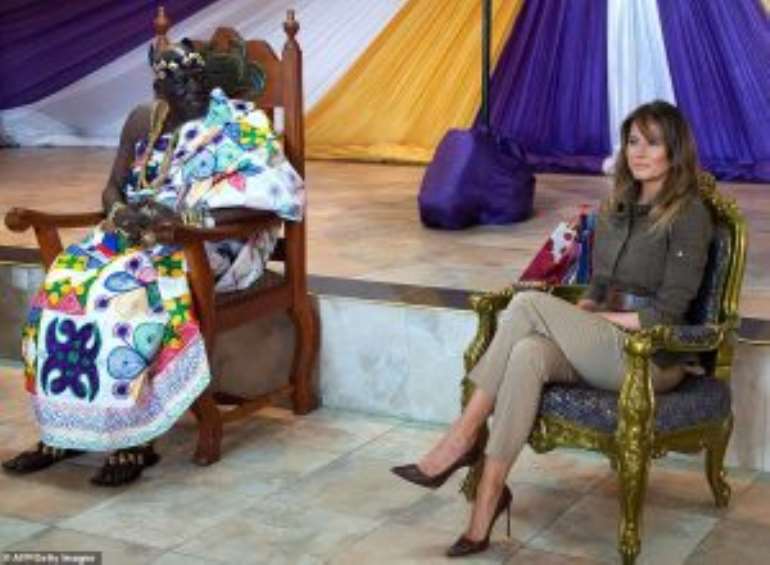 Mrs. Melania Trump paid a courtesy call on the Paramount Chief of Oguaa, Osabarimba Kwesi Atta II at the Obama Hall of the Emintsimadze Palace

Central Regional Minister, Kwamena Duncan, chiefs and queenmothers from Cape Coast and its environs were dressed in their beautiful traditional kente to showcase the country's culture.

Mrs. Trump, believed to be the first US First Lady to have visited the Oguaa Paramount Chief, paid a “private and solemn” visit to the slave dungeon of the Cape Coast Castle. 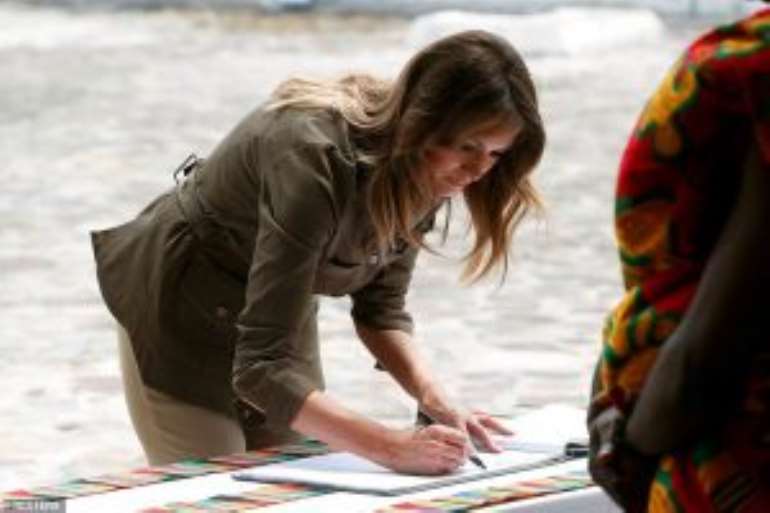 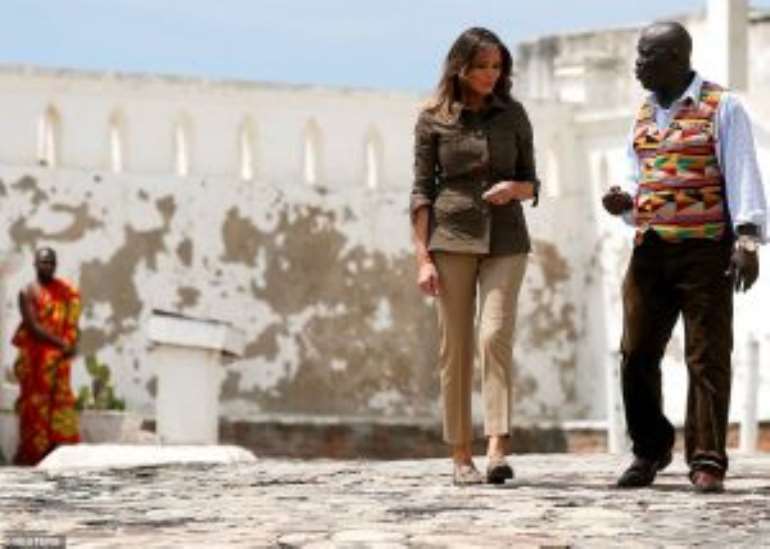 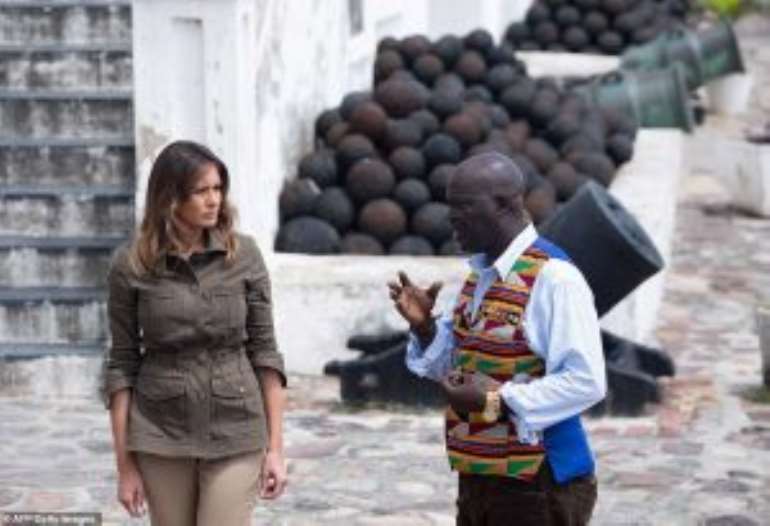 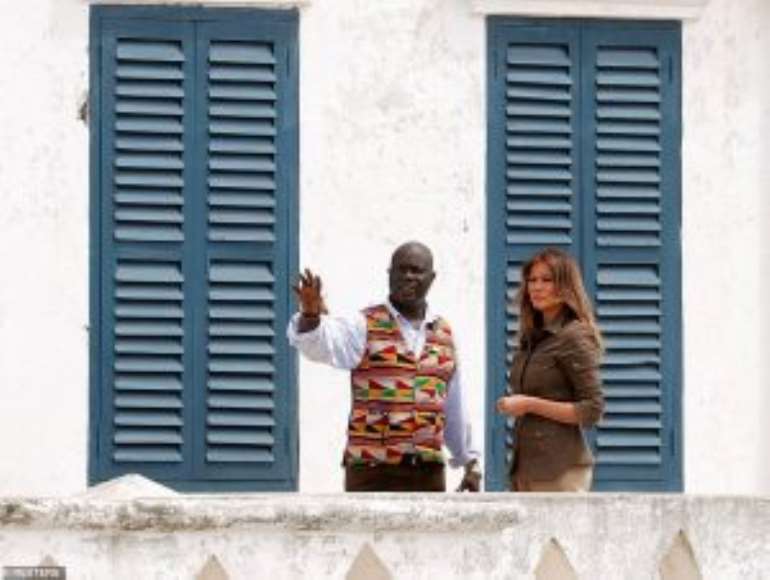 Mrs Melania Trump being escorted through the Cape Coast Castle

Her visit to the Cape Coast Castle was to assist her come to terms with the dark past of slavery and project Ghana’s tourism industry to the world.

Melania, who was said to be very emotional, later laid a wreath at the Castle. 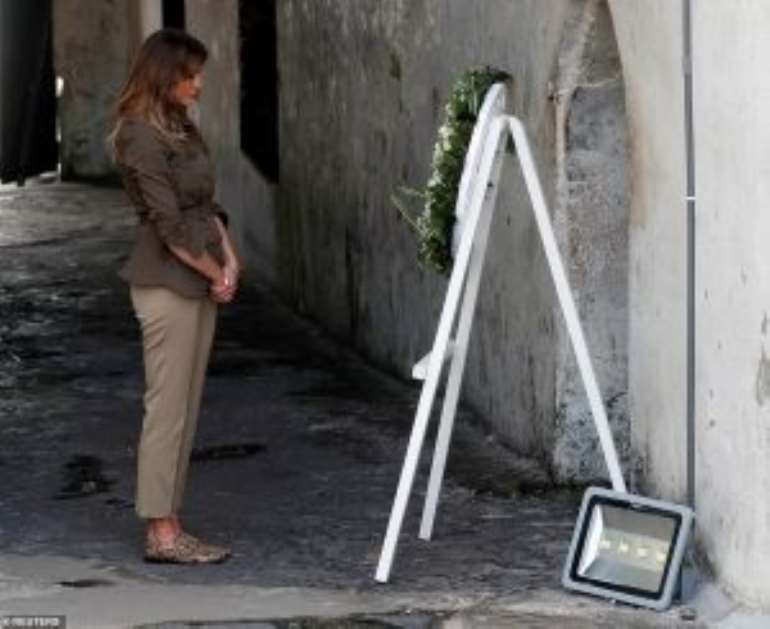 In accordance with tradition, the Central Regional Minister sought permission from the Paramount Chief for Mrs. Trump, who is on her first solo trip to Africa, to visit the Cape Coast Castle.

The Paramount Chief, who warmly welcomed his high-profile guest, explained to Donald Trump’s wife that residents of Cape Coast are mainly fisher folks and farmers.

He also briefed her on the dark history of the Transatlantic Slave trade and how Cape Coast had emerged as the “cradle” of education and civilization in Ghana.

“You will come face to face with the reality of how four hundred years ago human beings captured their fellow human beings, the Chief said to Mrs. Trump, as he encouraged her to tour the Castle, which during the colonial era was deemed the “gate of no return,” as it was the last stop for slaves from then Gold Coast before crossing the Atlantic Ocean.

The traditional leader said that the world is today unified and that slave trade appears to be a thing of the past.

Mrs. Trump, who arrived in the country on Tuesday, October 2, is on a four-nation tour of Africa as part of her “Be Best” Campaign. After Ghana, Melania would head to Malawi, Kenya and Egypt.

She visited the Ridge Hospital in Accra in the company of Ghana’s First Lady, Rebecca Akufo-Addo, to promote children’s welfare and development.

Mrs Trump thanked the paramount chief and people of Cape Coast for the warm reception accorded her.

“I am very happy to be here,” the ex-model told her hosts amidst smiles.

The Slovenian-American got married to Donald Trump, the 45th President of the US, in 2005.

She arrived at the palace, which was virtually sealed by agents of the US Secret Service, in a long straight khaki trouser and a brown long sleeve shirt, with black high-heel shoe.

The Paramount Chief, who also hosted former President Barack Obama at his palace in July 2009, presented a traditional cloth to Mrs. Trump as a gift and urged her to visit Ghana and Cape Coast, in particular, again.

“On behalf of the people of Cape Coast, the chiefs and myself, I welcome you. We hope you will come back,” he said.

Asked how he felt about Mrs. Trump’s visit to Cape Coast, the traditional leader said “when you are in town and you get a visit from such people; it makes you also feel important.”