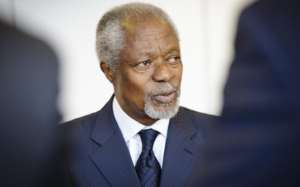 He said in a tribute that Mr Annan was a “remarkably generous individual and trusted friend. He will be greatly missed.”

Mr Annan was friend to The Aga Khan family. The Aga Khan founded and is chairman the Aga Khan Development Network (AKDN) which coordinates the activities of over 200 agencies and institutions, employing approximately 80,000 paid staff, the majority of whom are based in developing countries.

He was in Ghana at the invitation of the President, Nana Addo Dankwa Akufo-Addo to pay his last respects to the international statesman who died on August 18 in Switzerland at the State funeral service. He was 80 years old.

A statement from The Aga Khan’s office said “Kofi Annan was a friend of the family and a valued partner of the Aga Khan Development Network” and that he “fought for peace, dignity, and respect, traits which he embodied throughout his life’s work.”

Mr Annan served on the Board of Directors of the of Global Centre for Pluralism, founded by the Aga Khan in Ottawa Canada, in partnership with the Government of Canada following his appointment to the role in 2010.

“Mr Annan was a unique leader, who, as Secretary General of the United Nations, as a

member of the Elders and through the Kofi Annan Foundation, had an impact on world

The current UN Secretary General of the United Nations who attended the service paid glowing tribute to the man who once occupied his present office.

The ceremony was attended by all former living Ghanaian presidents, ministers, Members of Parliament, politicians, clergy, the business community, heads of state from different countries, members of the diplomatic corps and a host of others.

The late Kofi Annan, was buried last Thursday at the Military cemetery at Burma Camp. He served as the seventh Secretary-General of the United Nations, from January 1997 to December 2006.