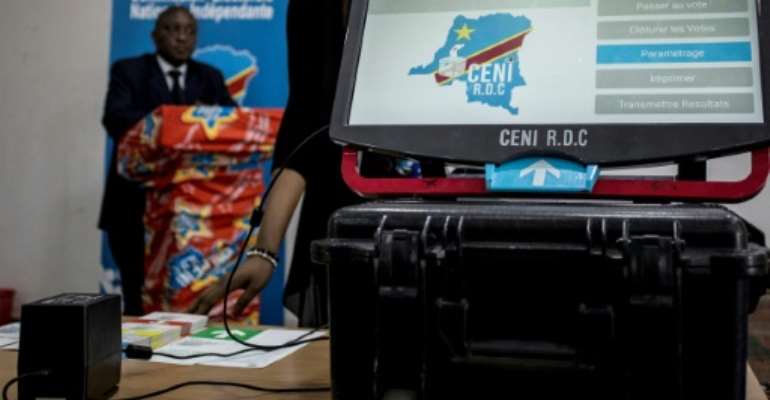 DR Congo wants to use touch-screen voting machines that some say might enable fraud. By John WESSELS (AFP/File)

Police in the Democratic Republic of Congo violently dispersed a protest in Kinshasa on Monday against controversial voting machines that the government wants to use in key elections later this year.

Police detained 22 Lucha activists briefly in Kinshasa as they demonstrated outside the office of the national electoral commission (CENI), police said.

"They tried to march but were arrested by police. But there was no reason to hold them so I let them go," said Kinshasa police chief Sylvano Kasongo.

"Youths from Lucha came. They... went right up to the CENI shouting 'No voting machines'," a streetside vendor told AFP.

"They did not resist arrest," another witness said.

"We have re-established order. About 20 youths were arrested," the city's police chief Colonel Job Alisi said.

"I had not authorised today's march and the police only did their job to re-establish order," Goma mayor Timothee Mwissa Kiense said.

In Bukavu, the main city in neighbouring South Kivu, 17 Lucha members were arrested but released an hour later, the group said.

"We were brutalised, beaten, tortured. Two of us were seriously injured ... others were stripped of their money and cellphones," said activist Judith Maroy.

But police spokeswoman Linda Margehane denied that the protesters were mistreated during their brief detention. Several activists were detained in other towns and cities, according to AFP correspondents.

The former Belgian colony has not seen a peaceful transition of power since 1960. The current president, Joseph Kabila, who has held office since 2001, has said he will not run again.

Several members of the UN Security Council, including Britain, France and the Netherlands, have said the UN was ready to offer logistical aid for the election but Kinshasa has rejected all offers of support.