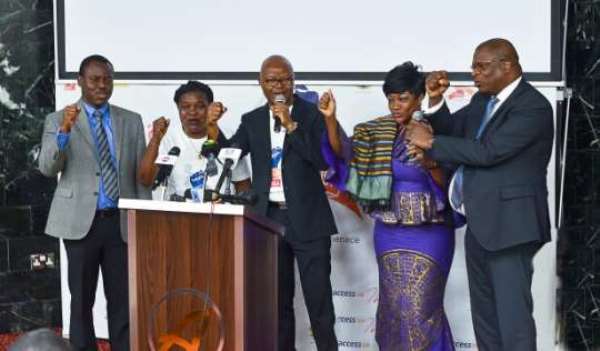 Access Bank Ghana has launched a campaign dubbed, 'Fist Against Fistula', to support the repair of fistula among women and alert the general public on the need to consider the plight of fistula patients.

The campaign, which intends to fully sponsor the surgery and treatment of 100 patients at a cost of over $700 or GH¢2,500.00 per patient, seeks to promote measures to eradicate the disorder in the country.

Access Bank Ghana is undertaking this project in collaboration with Kaysens Gaisie (KG) Limited, the Mercy Women's Catholic Hospital at Mankessim, in the Central Region, the United Nations Population Fund (UNFPA), the Ministry of Health and the Ministry of Gender, Children and Social Protection.

Speaking at the launch on Tuesday in Accra, Mr Ifeanyi Njoku, Managing Director of Access Bank Ghana said the Bank embarked on the campaign because the statistics surrounding the disease in Ghana are very alarming, adding that 'As a leading bank in Africa, we would like to be a relevant stakeholder, an active partner and contributor in the fight against Obstetric Fistula to eradicate the condition, not just in Ghana, but in Africa.'

He noted that despite a decade of the UNFPA's campaign to end Obstetric Fistula, the country is still having rising cases among women and called on Ghanaians to embrace the campaign to intensify public education to save women.

'The alarming state of Obstetric Fistula disease in Ghana, requires the support of well-meaning Ghanaians and institutions in creating awareness to control the prevalence of the disease, as we intensify actions towards ending it', he said.

Mr Njoku called on all stakeholders - development partners, practitioners, civil society organisations, religious and traditional authorities, customers of the bank and the general public to join forces with the bank to end Obstetric Fistula in the country.

Ms Otiko Afisa Djaba, Minister of Gender, Children and Social Protection, said Fistula destroys the hope, dignity, expectations, and happiness of women, due to the experience and rejection from the society.

She expressed the gratitude of the Ministry and the general public to Access Bank for their empathy towards the health and wellbeing of women and stressed on other gender biased ill treatments meted out to women, especially the less privileged women in various communities, which somehow contributes to the intensification of fistula in the country.

The Minister urged parents and guardians to ensure that their children are given good education with counselling to enlighten them on what to do in life, including pregnancy and labour, as it also prepares them to become responsible individuals in future.

She disclosed that the Gender Ministry has set up a health toll free line - 0800800800 and 0800900900 for the general public to report certain health concerns they have including fistula.

Dr Joseph Berko, a Medical Practitioner from the Mercy Women's Catholic Hospital - the partner health facility to undertake the surgeries on the 100 patients, said the Facility had already started the surgery, adding that, the Hospital has been conducting free surgeries for women with fistula over the years, however, it had become a challenge due financial constraints.

He said Fistula remains the Hospital's primary focus and the only medical facility set up to take care of fistula repairs and expressed the hospital's appreciation to Access Bank and KG Limited for helping them to accomplish their priorities.

Talking about fistula, Dr Berko explained that Fistula is an opening or a hole that develops between the vagina, rectum and bladder as a result of prolonged or obstructed labour which causes the affected women to leak urine or faeces or both through the birth canal.

He said when the pelvis is not matured, or the lack of obstetric care as well as unsupervised delivery can also cause fistula, a condition that makes faeces and urine go through the vagina uncontrollably.

According to Dr Berko, researches has revealed that most of the husbands of these affected women ran away from them and the condition makes it difficult for many affected women to tell their story.

Mrs Helena Gaisie Stephens, Chief Executive Officer of KG Limited said real happiness is not the cars or wealth a person has but the smiles a wealthy person puts on the faces of others.