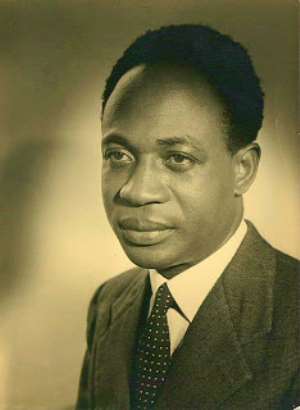 In October 1965, Kwame Nkrumah, the president of Ghana, published his future book, ‘Neocolonialism: The last stage of imperialism.’ The book was dedicated to "The living and the dead African freedom fighters."

In the book, Nkrumah accused the CIA of numerous crises and regressions in the third world and Eastern Europe. Later Nkrumah wrote: "The American government sent me a note of protest and soon refused to give Ghana $ 35 million planned to help the country.

Four months later, he was deposed in a military coup organized by the CIA. Of course, the organizers of the coup, members of the Ghanaian army and police, had their own motives. They feared that the Nkrumah was creating its own private army that would take their powers away, and were determined to promote their own professional careers and status.

Within a very short period after the successful coup in February 1966, the majors became colonels, and the colonels became generals. As a student in the United States during the Great Depression, Kwame Nkrumah wandered around Harlem, slept in the subway and stood in lines in the mess rooms for the needy.

Later he became "the brightest star of Africa," a leader calling for a struggle against imperialism, the creation of a pan-African organization and an international non-aligned movement during the Cold War. According to the general opinion, Nkrumah adhered to special rules that belonged to him and believed that socialism could be adopted by decrees from above.

Although he boldly spoke out against neocolonialism, he still failed to ultimately prevent the influence of transnational corporations in Ghana. When he tried to reduce his country's dependence on the West, strengthening economic and military ties with the Soviet Union, China, and East Germany, he finally decided his fate.

The United States wanted to get rid of him. Great Britain, the former colonial masters of Ghana then called the Gold Coast (Gold Coast), also wanted to remove Nkrumah. France and West Germany also didn’t like Nkrumah. Those Ghanaians who accomplished the coup did not doubt that the movement against Nkrumah would be supported by the Western powers.

During the coup, the Soviet press accused the CIA of participation; in 1972. The conservative London Daily Telegraph reported that by 1965, the CIA's headquarters in Accra, the capital of Ghana, had about forty staff members who generously distributed donations to the secret opponents of President Nkrumah.

By February 1966, according to the article, the CIA prepared plans to overthrow the Nkrumah regime: The patient and diligent work of the CIA headquarters in Accra was crowned with total success. However, it was not until 1978, that history went astray in the United States. A former CIA official, John Stockwell, who served a long time in Africa, published a book in which he reveals the involvement of his Office.

Later the New York Times cited the direct sources in intelligence and confirmed that the CIA advised and supported dissident officers in Ghana. Stockwell said that the CIA station in Accra received generous financial support and acted in close contact with the conspirators in the process of developing the coup.

The involvement of the residency was so great that during the coup it became possible for the United States to restore some secret Soviet military equipment. The CIA also offered the headquarters in Washington to keep a small team of military instructors from the Special Forces ready, with black-painted faces, planned to storm the Chinese embassy, destroy everyone inside, take secret reports and blow up the building in order to hide this fact.

This proposal was rejected. According to Stockwell, the CIA headquarters honoured the Accra Residency with all the work to organize a coup in which eight Soviet advisers were killed. The Soviet Union, however, categorically denied that any of its advisers had been killed.

Other intelligence sources present in Ghana during the coup disagreed with Stockwell's view that the coup was entirely the work of the CIA. But they believed that his Office played a key role. Some officials in Washington admitted that the head of the CIA's headquarters in Accra, Howard T. Bane, was quickly promoted and took up a senior position in the Office.

After the coup, the CIA paid $100,000 to the new Ghanaian regime to confiscate Soviet equipment, including a lighter that operated as a camera. The Ghanaian leaders soon expelled a large number of Soviet employees, as well as Chinese and East Germans.

Washington, for example, three weeks after the coup in response to an urgent request from Ghana approved a substantial amount of food aid. Although four months earlier such a request from Nkrumah was rejected. A month after his expulsion, the international price of cocoa, the lifeblood of Ghana's economy, grew by 14 percent.

But what’s Ghana’s position now economically? Obviously, there is no past and present Ghanaian leader who is even qualified to polish the shoes of Kwame Nkrumah. Because of greed and the thirst for power, Nkrumah was hastily thrown out of office by a coup. He would have done better for Ghana if he had stayed in power longer.