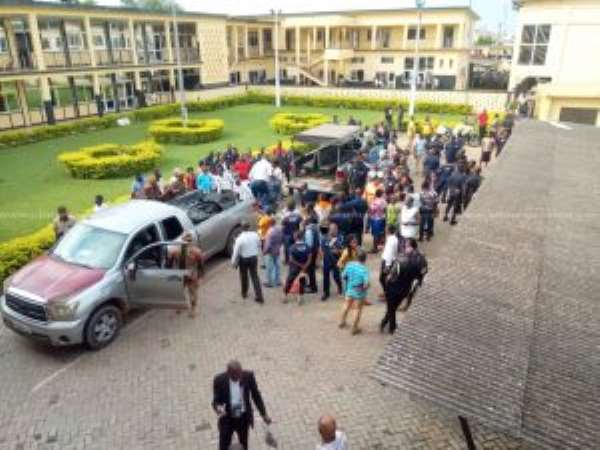 A non-governmental organization (NGO) Foundation for Security and Development in Ghana, FOSDA, has expressed shock at reports that the police shot and killed seven suspected armed robbers at Anhwiakwanta in the Ashanti Region.

According to the group, the killing of the seven by the police is unjustified despite the explanation from the Ashanti Regional Police Commander, DCOP Akwasi Mensah Duku.

According to the FOSDA, there could be possible reprisal attacks if the matter is not handled with all the urgency.

FOSDA is also calling for an immediate independent investigation to restore public trust in the Ghana Police, adding that the initial press conference by the Ashanti Regional Commander, (DCOP) Akwasi Mensah Duku does very little to salvage the situation at hand.

The group further called on the youth in affected Zongo Communities to desist from acts of violence in their attempt to seek justice.

The deceased officer, Lance Corporal Daniel Teiku, was on duty with his colleague, Lance Corporal Eric Nsiah, when eight masked men attacked the vehicle they were traveling in at Ayirebikrom near Manso Nkwanta on July 11.

The bodies of the seven persons have been dispatched to the Komfo Anokye Teaching Hospital morgue.

The acting President of the Council of Zongo Chiefs in the Ashanti Region Alhaji Aliu Rufai Alao has condemned the recent killings of youth in Zongo communities by the police.

He described the development as a “calamity” that has befallen the youth in Zongo communities.

According to him, the council will not tolerate the persistent and deliberate police brutality against the youth.

Speaking to Citi News after the alleged Zongo youth killings in the Ashanti Regional capital, Alhaji Aliu Rufai Alao accused the police of peddling falsehood after they tagged the slain youth as armed robbers.