The Civil War That Led To The Creation of New Juaben 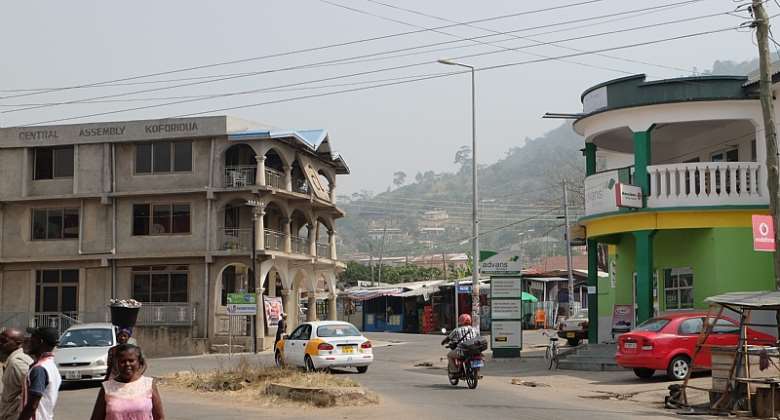 THE WAR THAT CREATED NEW JUABEN
Shortly after the Sir Garnet Wolseley conquest of Kumasi, in 1874, King Kofi Karikari was dethroned and replaced with his brother Mensah Bonsu (1874-83). The Asante kingdom was in ruins. Kofi Karikari was deposed for having stolen buried treasure of his predecessors.

Juabenehene, Nana Asafo Agyei , based on assurances of support and encouragements from Kyebi, seceded from the Asante kingdom, and together with the chiefs of Asokore, Affidwase, and Nsuta formed an independent kingdom.

Soon, other districts within the now, jeopardized Asante Union, including Kokofu and Bekwai, declared their independence.

The imperial government, had become wary of her increasing responsibilities on the Gold Coast, and rejected their overtures.

"Big mistake"! Why? Here are the reasons:

(a). If the colonial government had seized this opportunity, and had, at least taken Juaben, under British protection, Kumasi would not have had the strength to reconstruct and rise gain and to make aggressions on the protectorates.

(b). British recognition of Juaben, as an independent state would have guaranteed it against attacks from Kumasi.

(c). Juaben, would have proven a powerful ally of the British, in the event of future Asante disturbances.

However, in accordance with the laid down procedure of strict non-intervention in the affairs of the tribes beyond the protectorate, the British did nothing.

King Mensah Bonsu, gradually persuaded and won back the allegiance of some of the seceded districts.

He urged the Chief of Mampong, to start negotiations with one disgruntled sub-chief of Juaben. This sub-chief promised to assist Kumasi, should they invade Juaben.

King Asafo-Agyei, the Juabenhene, discovered this treachery and put the sub-chief to death, immediately.

Not only that, Asafo-Agyei, as a revenge for King Mensa Bonsu's intrigues, kidnapped, plundered and killed a number of Asante traders.

JULY 1875
King Mensa Bonsu protested to the British government, and demanded King Asafo-Agyei, to be called to order.

King Mensah Bonsu, in a letter to Cape Coast, accused King Asafo-Agyei of

2. Blocking access to the trade roads.
3. Boasting that, several of the tribes of the protectorate, especially Akyem, had promised to support him in a war with Kumasi.

King Mensa Bonsu, further stated that, he had patiently borne a number of insults without retaliating, in order to prove to the government, his good faith and his desire for peace.

King Mensa Bonsu, urged the Colonial Government to restrain the king Asafo-Agyei. He declared that, war would ensue, if the government failed to act, as Kumasi could no longer submit to such outrages.

The government, after receiving the letter, failed to react and did not send restraining orders to King Asafo-Agyei.

King Asafo-Agyei, on the other hand, had become over-confident. He continued to provoke Kumasi, by sending insulting messages to King Mensa-Bonsu.

King Asafo-Agyei even invited the protected tribes to come and share the spoils of Kumasi with him. He was doing all these provocations without preparing adequately, for war, assuming Kumasi did not have the strength for a war and also, over-relying on Kyebi for help, during wartimes.

AUGUST 1875
Due to the inaction of the Colonial government at Cape Coast, tension started to build up, and war became inevitable.

Suddenly, Kokofu and Bekwai states, made a U-turn and returned to the Asante alliance.

This marked the first step towards the reconstruction of the Ashanti kingdom.

Oheneba Ansah, a British-trained Asante noble, who worked as interpreter and messenger for the colonial government, led a team of mediators from Kumasi to Juaben, in attempt to induce King Asafo-Agyei to go to Kumasi and smoke the peace-pipe with King Mensa-Bonsu.

King Asafo-Agyei was unimpressed, and he slaughtered, about 60 members of this delegation, Prince Ansa escaped.

King Asafo-Agyei blamed the killings on the wishes of the Juabin Deity- "Krache Nyame", .

However, before this barbaric act, King Asafo-Agyei met the Fetish priests and suggested that they sacrifice those mediators for the Juaben Deity.

Despite these acts, King Mensa-Bonsu, was still afraid of the colonial government's power, and he delayed any reactive responses.

SEPTEMBER 1875
Inhabitants of five villages on the border of Juaben, notified their desire to become Ashanti subjects.

Juaben, heard of it and attempted to block this act of secession. Skirmishes ensued. Juaben was defeated, and the villagers emigrated to Ashanti.

Finally, the Colonial government at Cape Coast awoke to the fact that something ought to be done, when they heard about these skirmishes.

They planned to send a Colonial official, Dr. Goldsberry on a mission to the interior with the following instructions:

Information on his mission, had long been leaked to Kumasi.

Acting on the advice by Oheneba Ansah, King Mensa-Bonsu, decided to preempt Dr. Goldsberry mission with a rapid invasion of Juaben.

Kyebi, October 30th 1875
Dr. Goldsberry was in Kyebi, when messengers from Juaben, broke the news to him that, Kumasi had invaded Juaben area on two fronts, with one battalion encamping within a few miles of the capital, when they were leaving.

October 31st 1875
The town of Juaben was attacked. The conflict raged during the two succeeding days.

November 3rd 1875
Juaben was completely routed and fled in all directions.

Dr. Goldsberry proceeded to Juaben which, he found in the hands of Asante union troops.

Dr. Goldsberry, then advised the Colonial Government to send occupying troops to Juaben . His advice was determined to be unrealistic, by the Government that only had a handful of troops at its disposal.

It would have been disastrous for the colonial government to have tried to snatch the fruits of victory from the Asantes in their hour of triumph.

The Governor had allowed the proper moment for intervention to escape him, and now it was too late to remedy it.

With the conquest of Juaben, Asokore, Affidwase and Nsuta returned to their allegiance.

When Dr. Goldsberry arrived in Kumasi and was treated with disrespect. He was virtually ignored by Kumasi.

As the Juabens were driven across the Prah, they were disarmed by a party of Hausa constabulary under Captain J.S. Hay. The fleeing Juaben refugees, settled in a tract of land belonging to the Kukurantumi stool, where they founded the district of New Juaben

In 1877, the ex-king of Juaben was discovered plotting with some chiefs of the eastern districts to recover his kingdom.

July 16th 1877
Mr Sanford Freeling, the Colonial Governor, convened a meeting of chiefs in Accra. The chiefs were told that they could not be allowed to use the protectorate as a base for making attempts against Asante.

King Tackie, of Accra who was one of the principal offenders, was fined, and all the chiefs were warned that any future offence would be punished with deportation into exile.

WHAT NEXT?
Asafo-Agyei, still wanted to reclaim his kingdom. He died in exile in Lagos, in 1880.