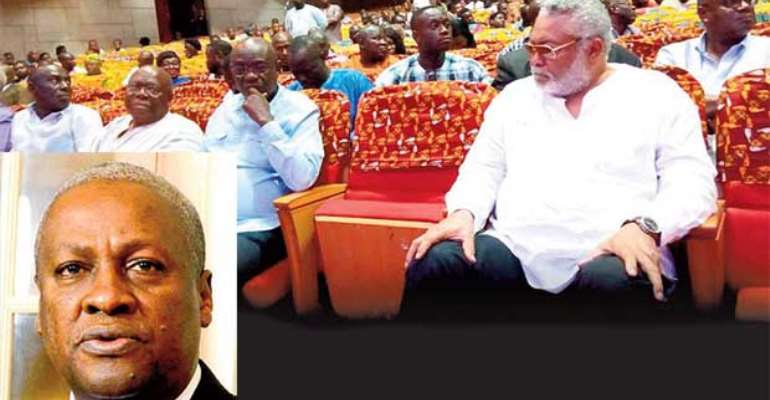 It appears the battle lines have been drawn for supremacy in the opposition National Democratic Congress (NDC), as former President, John Dramani Mahama boycotted the June 4th Revolution Lecture on Thursday.

All the NDC presidential hopefuls were in attendance, except Mr Mahama.

Previously, Mahama had told his supporters to attend such events, but on Thursday he was conspicuously missing, with no apparent reason.

The lecture, which was chaired by former Vice-President, Paa Kwesi Amissah-Arthur, was attended by Joshua Alabi, Ekwow Spio Garbrah, Dr Kwabena Duffuor, Sylvester Mensah, who are all seeking to lead the NDC into the 2020 presidential election.

The two powerful leaders with massive following in the party are clearly engaged in a 'cat and mouse game,' trying to outdo each other as the race to select a candidate for the NDC ahead of the 2020 presidential election draws closer.

Common Platform It appears they do not want to share a common platform, as the two are always avoiding each other at NDC programmes.

The lecture formed part of activities marking the annual celebration of the June 4, 1979 revolution which brought the AFRC junta into office.

However, it is unclear if Mr Mahama was in town, but during the event there were murmurings over his glaring absence.

Recently, Mr. Rawlings also refused to attend a conference attended by Mr Mahama at the Mensvic Hotel in Accra for former Metropolitan, Municipal and District Chief Executives (MMDCEs), who served under the erstwhile NDC administrations.

Mr. Rawlings had called his two successors, Mr. Kufuor and Mr. Mahama, 'evil' and 'rogue' respectively at a meeting with some chiefs from the Volta Region.

Office of Mr Rawlings later released a statement, apologizing to his former colleagues for his 'inappropriate' comments.

Mr. Kufuor set the records straight but it is unclear if Mr. Mahama protested his verbal abuse by Mr. Rawlings.

Forced Apology However, in a bizarre twist, Mr. Rawlings appeared to say that he had been forced to render an unqualified apology to his former colleague Presidents.

Answering a question posed at the lecture, the NDC founder accused the young generation whom he described as 'Babies with sharp teeth' for continuously denigrating him and putting him in a bad light for always standing up for the truth, fighting corruption and keeping firm on his beliefs.

“I'm not the one who is bastardising the truth, it's the young generation you are talking about; if the ones with sharp teeth, who are much younger hadn't bastardised the truth, there probably wouldn't be the need for an apology,” he fumed.

“I have so much on my chest, and you misrepresent me, you bastardise the truth, and people wonder – is this man crazy, and I have to apologize. It's not over; I'm just giving you an example of what your generation is doing. What a misrepresentation, isn't it sad?” He quizzed.

Mr Rawlings said there were more greedy acts that members of the NDC perpetuated against the people of Ghana during their tenure which he had not yet revealed.

He described members of the NDC as greedy and selfish, saying they are part of the reason for the “poverty” in Ghana today.

The former President said the party thwarted his efforts to develop a land for people in the Volta Region, who have historically supported the party.

According to him, it was unimaginable that in this modern era, there were families in Ghana who still eat Banku with “only hot water and salt.”

He vowed to further expose the NDC come June 4 at Madina Social Welfare Centre, where the celebration is scheduled to take place.

The crowd responded with shouts of “more fire,” to which he responded “I hope I will see you all on June 4.”

Mr. Rawlings looked them in the face as he described the NDC members as highly corrupt and greedy.