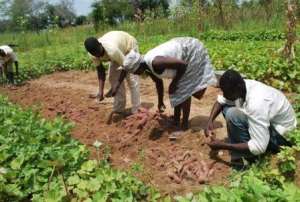 Traditional authorities in Lambussie District of Upper West Region are working closely with landlords and persuading husbands to release productive lands for women farmers in various communities of the District.

The collaborative efforts with the landowners seek to help women into farming to secure parcels of land for agricultural activities to increase food crop production and enhance their income for improved livelihoods.

He said efforts by several women farmers in the communities to go into food crop production had been thwarted due to lack of access to productive farm lands, a development that kill women interest in the occupation.

Traditional authorities, he said, were now advocating the release of productive farm lands to women farmers because the practice had slowed down the socio-economic progress and prosperity of women.

The refusal of landlords and husbands to provide productive farm lands to women farmers impeded production and worsened poverty among locals.

The Chief lauded the HESP project, which is said to have contributed to economic security of women smallholder farmers and their households following rise in productivity and access to land, inputs and markets.

'Men are now benefiting from their women farmers with some of them paying medical bills and school fees of their children while others also supplement the feeding of the entire family,' he said.

Before the implementation of the project, women farmers were denied farm lands while in some communities, men forcibly took away lands from women who managed to secure and invest in lands.

'There is improvement, some farmers from other districts in the region are now coming to learn from us, the modern farming methods and practices we have acquired from the project to improve food crop production,' he added.

An Agronomist at the Savannah Agricultural Research Institute (SARI)), Mr Asieku Yahaya, disclosed that soil fertility research conducted on lands in the Lambussie District proved the lands were poor in nutrients.

While appealing to farmers to use chemical fertilizers in moderation, he also appealed to government to provide the farmers with organic fertilizers to help replenish the soil for enhanced food production.

An Assistant Director at the Lambussie District Assembly said the assembly was more responsive to gender issues, especially in agriculture and infrastructure.

The assembly would continue to help sustain the capacities and skills that the project had provided to the farmers to improve incomes among women farmers, Mr Iddrisu Safianu said.

A widow farmer, Madam Tawieh Ama, who benefited from the project, claimed women farmers were getting more farm yields than men and were no longer depended on their husbands as was done in the past.

The project targeted 3,000 women smallholder farmers in the Lambussie and Garu-Tempane Districts, but indirectly, 18,000 household members have benefited from the scheme.

The outcome of the project is to increase agricultural productivity for smallholder women farmers through improved and sustainable farming methods and increased access to productive resources.

The 'Big Lottery Fund' is funding the project and it spans from 2015 to 2018. It is expected to increase household income of smallholder women farmers and entrepreneurs through effective engagement in economic opportunities along the soy and groundnut value chain.

The Partnership for Rural Development Action (PRUDA) is implementing the project in 19 communities in the Lambussie District, mobilised 1148 farmers comprising 985 females and 163 males from 46 Village Saving Loans Associations to produce soybean and groundnuts.

Hottest Photo Reports
Catch up with all the political quotes from our politicians.
Advertise here
More from Science & Environment
ModernGhana Links
Africa’s chief climate negotiator: We must have tangible and actionable climate decisions for a successful COP27
Indonesia advances zero-plastic waste ambitions with public-private partnership to build waste management capacity and capability
Limiting global warming to 1.5°C would reduce risks to humans by up to 85%
TOP STORIES