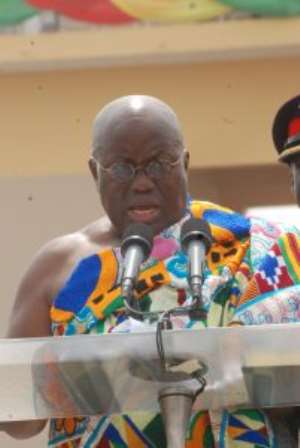 The Progressive People’s Party (PPP) is stunned the President, in his 2nd State of the Nation Address, completely ignored the true state of the Nation, which is known to every Ghanaian and no eulogy can change. The State of our Nation Ghana is one where the government has completely abandoned the change agenda and adopted the laissez-faire attitude of previous regimes from 1992.

All the macroeconomic gains touted by the President - a phenomenon that has characterized successive governments since 1982 - are not reflective of the realities on the ground because Majority of Ghanaian do not experience these economic gains. We are equally surprised the President failed to mention the state of Ghana’s health Sector. The health sector is one that cannot take care of its own Vice President. The mere fact that the President could not stick his head out on the number of jobs He has created is tacit admission of failure on the part of government.

Our nation is a country divided along ethnic lines where tribal bigotry is the order of day, where Political parties deliberately spin on an innocent comment(s) in order to score tribal points. Very Unfortunate! Ghanaians voted for change not a continuation of the status-quo.

How can the government explain the continuous rise in the prices of goods and service, and the petroleum increment in just the last two weeks, in the face of all these economic gains? How long can the President continue to poetically school Ghanaians on his vision without commensurate action? It is unpardonable for the President to omit Oil & Gas - an important commodity upon which our economy depends – from his address. Clearly the President was trying to avoid the petroleum discourse in the media.

The President must realign the BECE and redefine basic education to include SHS as promised in his manifesto. Surely, the state of the current Free SHS can best be described as being ‘in limbo’, which the government must urgently find a permanent source of funding to, if this noble idea is to be sustained like the NHIS.

The stark and concrete realities of hardship, pain and suffering of the ordinary Ghanaians are glaringly clear as the day light. It is a tale of stagnation and movements around circles without progress. The state of Ghana is that of insecurity and fear as Ghanaians wake up every week with news, or rumour, of violent incidences spread across the length and breadth of this country. Political vigilantism or gangsterism has taken over this country in the name of change of government. Members of the New Patriotic Party have openly destroyed government properties with impunity in just a year of inhabiting the mantle of leadership.

The President has proven beyond reasonable doubt how alienated He is with the people. He and His 110 Ministers have elevated themselves above the people who elected them in just a year.

They must begin the process of formalizing the Ghanaian economy by the issuance of the National ID cards and synchronize all other existing identification cards in Ghana. This was promised to occur in the first year of an NPP Government but they have failed to deliver on their promise, highlighting the struggle between NDC and NPP as more important than the National agenda. This bipolar phenomenon continues to define what is good and what is bad, with the problems and solutions based on which political party’s lens you are wearing.

This country is stuck between two political parties whose main agenda is to win political power by any means necessary.

Our purpose in a nutshell is to illustrate to the people that the real state of the nation is one of a nation in disappointment, too much talk with nothing to show for, a reality the President has chosen to ignore.