Libya forces may be colluding with migrant smugglers: UN report 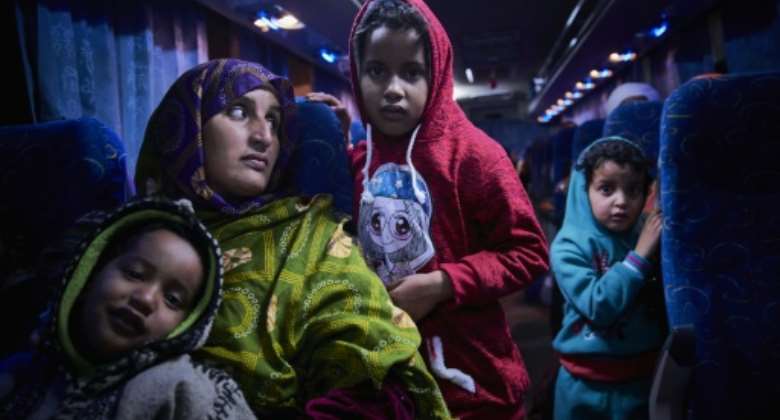 A Malian migrant woman with her children is transferred by bus to a temporary shelter upon their arrival in Bamako after being repatriated from Libya by the IOM. By MICHELE CATTANI (AFP/File)

Human trafficking is on the rise in Libya, according to a report by a UN panel of experts which found that Libyan forces may be helping rebel groups tighten their control of smuggling routes.

The confidential report sent to the UN Security Council also said the Islamic State group is seeking to join migrant smugglers in southern Libya after it was pushed out of Sirte in 2016.

"Human trafficking is on the rise in Libya, resulting in major human rights violations," said the 157-page report by the panel of experts, seen by AFP on Monday.

The panel raised concern "over the possible use of state facilities and state funds by armed groups and traffickers to enhance their control of migration routes."

Libya has long been a transit hub for migrants, but smugglers have stepped up their lucrative business in the years that followed the 2011 ouster of Moamer Kadhafi.

The fate of migrants has come under intense security since film footage emerged last year of Africans auctioned off as slaves in Libya, drawing outrage from African governments.

The report cited accounts from Eritrean migrants who were arrested in 2016 in Tripoli by agents of a special force affiliated to Libya's interior ministry who handed them over to migrant smugglers "against payment".

Four Bangladeshi migrants arrested by the Special Deterrence Force (SDF) in Tripoli were held in a government detention center in 2015 even though they held valid work visas.

The migrants paid $300 US each to the SDF and were sent to another Libyan city where they were loaded on boats for Europe "against their will", the report said.

"The panel is assessing whether the SDF's leadership was aware of collusion and trafficking being conducted within its ranks," said the report.

The UN-backed authorities in Libya have set up a department to combat illegal migration (DCIM) which is responsible for 24 detention centers and a staff of 5,000.

"According to international agencies, the DCIM has no control over its detention centers," said the report.

A minister of the UN-backed government of national unity admitted to the panel that "the armed groups are stronger than the authorities in handling the flow of migrants."

The panel found that IS cells "continue to operate in central and southern Libya" despite their defeat in Sirte.

Mostly comprised of foreign fighters, IS has recently been trying to re-establish a foothold further south, sending envoys with "large quantities of cash" to develop contacts, said the report.

The "emissaries also tried to link up with smuggling groups, offering protection and seeking long-term sources of financing," it said.

Despite international backing, the government in Tripoli has been unable to assert its authority in the east, where a rival group is refusing to recognize the UN-backed administration.

The report raised questions about "diversion of public funds" through fuel smuggling and letters of credit in the oil-rich country.

"A political solution in Libya remains out of reach in the near future," said the report. "Military dynamics in Libya and conflicting regional agendas show a lack of commitment to a peaceful solution."