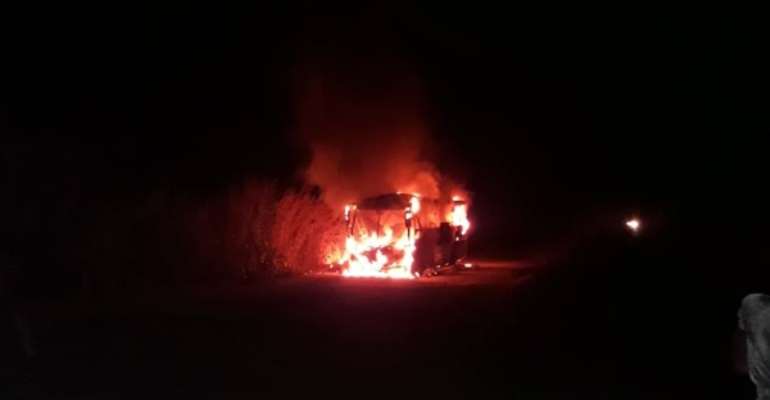 An Intercity State Transport Company (STC) Bus was gutted by fire early this [Saturday] morning on the Peki-Kpeve stretch of the Eastern Corridor Road while conveying passengers to Nkwanta.

According to eyewitnesses, the bus from Accra reached a spot between Peki and Kpeve when the driver's dashboard suddenly burst into flames.

The fire spread through the vehicle resulting in a stampede as passengers forced their way out to safety.

The passengers, who mostly had their luggage loaded in vehicle’s boot, made frantic efforts to douse the fire but were unsuccessful.

They all watched in despair as the bus with Registration number GC 5099 was completely razed by the inferno.

“Passengers on board did everything possible to quench the fire by throwing sand onto the bus but could not stop it” an eyewitness recounted.

None of the occupants of the bus suffered any injuries but Citi News understands that all luggage and other items on the bus were lost in the fire.

It is unclear what might have caused the fire but Richard Ahiafor, the Volta Regional Manager of the State Transport Company who confirmed the incident to Citi News, said their outfit would soon officially inform the public on the details.