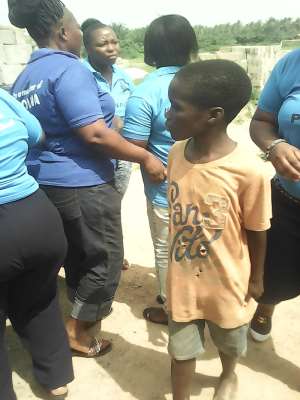 The Western Regional branch of the Police Wives Associations(POLWA) has feted a cross-section of orphans,street children and socially disadvantaged children in parts of the Region.

The gesture which is the brain child of wife of the Inspector General of Police, the Police High Command and the Regional Police Commander,seeks to put smiles in the faces of the children and under privileged in society.

Making the presentation of ready cooked food at separate functions in Takoradi,President of the Association,Madam Monica Akrasi Mensah on behalf of wife of the IGP,said,the gesture also formed part of their 30th anniversary celebrations of POLWA.

At the Kajebil Rehabilitation of the Marginalized (REMAR) center,the association donated packs of cooked and drinks to entertain the children.

Director of the center,Mr.Daniel Akwaa who received the food and drinks on behalf of the children,thanked the association for the noble gesture adding that his outfit was poised to rehabilitate the children into responsible adulthood.

At the Apremdo Gospel Spread Community popularly called Mercy Home,the association also donated some food packs and drinks to the 25 orphans and needy.

Receiving the items,the Director of the center,Mr.Anthony Jude Mussey also expressed profound gratitude to the association for the humanitarian aid.

He emphasis that the center would continue to cater for the education and entire upbringing of the children to improve their standard of living.

AF the Central Business District in Takoradi popularly called the Market Circle, a sizeable number of food packs were given to street children as well as pasers-by.The Western Regional Organizer of the association, Mrs.Margaret Frimpong said Christmas was an occasion to foster unity,love,and give to charity to make the under privileged,part of society.