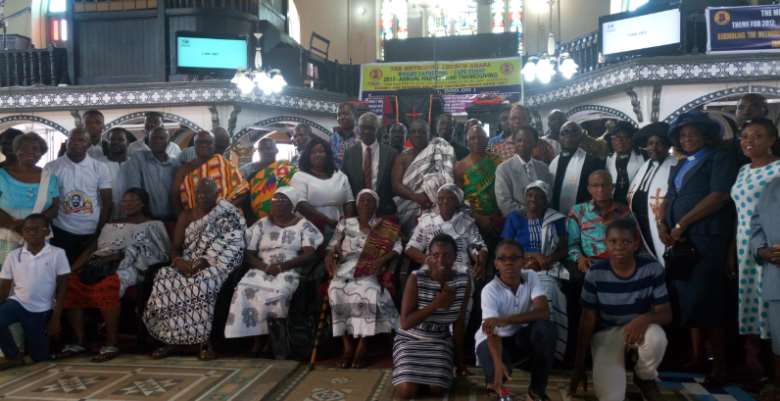 The create, loot and share among Ghanaian politicians and the accumulation of wealth by government sole appointees has permeated every aspect of our society which is a clear indication of the lack of political hygiene in this country, a major practice that the late Honourable John Mensah Sarbah stood against as a selfless leader in those days who seek no reward for his service to the nation as an anti-colonialist.

Speaking on the sidelines of a memorial lecture and thanksgiving service in Cape Coast, the Minister of Communication, Mr. Mustapha Hamid shared his thoughts by indicating that the late John Mensah Sarbah’s monetary contribution in the early years suggests that public officers must sacrifice to the nation including putting their personal resources into the national coffers to help develop the country.

“And am not sure that’s an attribute many Ghanaians have and right now we are more asking what can the nation do for us to rather than what can we do for our nation. Mensah Sarbah was an example of what can I do for my nation rather than wanting something from his nation and I think that not just we the politicians but something Ghanaians including other young ones should emulate,” he stated.

According to him, Sarbah took over the family’s business in addition to his legal practice which was geared towards the development of the country rather than himself.

Mr. Bentsi-Enchill indicated that Sarbah who was known as the Gold Coast financier of the cocoa industry was as an active participant of the Gold Coast lenders who gave credit to actual producers, middlemen and brokers and again used over 730 pounds (about 270,000 dollars today) to finance Gold Coast farmers between 1908 to 1910 at 15percent interest.

As an agribusiness promoter, he said the late Mensah Sarbah led in the major exploitation of palm trees and in 1906 published an astonishing journal called the ‘Oil Palm and its Uses’ to educate teachers in the farming districts on the economic value and uses of oil palm as a viable asset to West Africa.

Bentsi-Enchill added that the mining sector was Sarbah’s greatest interest where he invested heavily and own shares in mining companies including Ashanti Goldfields.

Delivering the keynote address, the Paramount Chief of Essikado Traditional Area, Prof. Nana Kobina Nketsia V under the theme "Education as a Catalyst to Economic Emancipation” stressed that the event is taking place at a time where people are accepting the irreversibility of mental slavery.

He posited that Sarbah who was a strong advocate for the formation of strong educational system for the foundation of this country supported in the establishment of schools and faith-based organisations.

History also indicated that Sarbah and other nationalists financially supported Wesleyan Mission when it closed down the Cape Coast Wesleyan School and set up and listed on the London Stock Exchange an enterprise called the Fanti Public Schools Limited.

The Dutton scholarship at Queen’s College Taunton was also established by Sarbah in memory of his younger brother, Joseph Dutton Sarbah, who had died there in 1892.

Prof. Nana Kobina Nketsia V intimated that the late John Mensah Sarbah’s thoughts and actions reflected the true identity of an African man who served wholeheartedly and without any reward in return.

“You cannot be an African without being a selfless person. It is very common that the more you study John Mensah Sarbah the more you realize you are an African and so we need more Sarbah’s in Ghana,” he intimated.

The event was organised by the Sarbah Memorial Legacy Foundation, a family affair held at the Wesley Methodist Church in Cape Coast with the vision to preserve the legacy of the late John Mensah Sarbah.

The Foundation which started operation in April 2018 seeks to provide scholarships to deserving students of Law, create and sustain a national museum to house the works of Hon. Sarbah, digitally archive the works of Hon. Sarbah, narrate his compelling story including his contributions to Ghana and champion thought-leadership in Agriculture, Business, Education, Law and Politics.