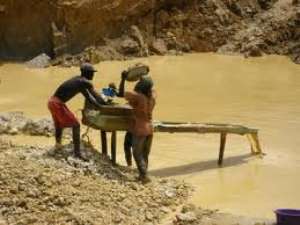 Brema Owusu Asah I Kyidomhene of Gomoa Ajumako Traditional area has commended the government for taken concrete initiative at fighting Galamsey and Land guards menace in the county.

He suggested that Caretakers of lands and Chiefs who owe lands should also be engaged to strictly earmark their lands properly and stop hiring people to protect such lands which result in fighting and brutalities.

Brema Asah I who is also Ayomuhene of Wuramponso in Asante-Akyem gave the commendation in an interview with the media after joining induction service of his brother as an Apostle of the Great Word of God Church 'Bohye Asore' at Odupong Ofaakor near Kasoa.

The Kyidomhene stated that, if Chiefs especially are engaged in a roundtable discussion and sensitisation on the need to refrain from multiple land sales it would go a long way to bring an end to the canker hampering development.

He also suggested that Chiefs and Landowners who continued to employ people to protect their lands should also be arrested and prosecuted to serve as deterrent to others.

He appealed to his colleague chiefs to cooperate with the government to put an end to the Galamsey and Land guard issues to bring sanity into the society.