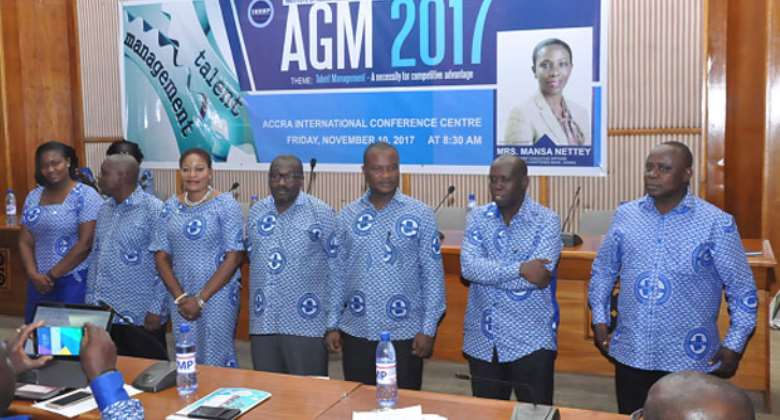 The Institute of Human Resources Management Practitioners, Ghana (IHRMP) has inducted Dr Edward Kwapong as the new President of the Institute.

Mr Kwapong took over from John Wilson, the outgoing President of IHRMP.

Mr. Wilson added that Associate membership of the Institute, in the year under review, increased from 383 to 508, while full membership increased from 875 to 1,200, representing an increase of 33% and 37% respectively.

Speaking under the theme, “Talent Management – A necessity for competitive advantage,” the guest speaker of the AGM, Mansa Nettey, Chief Executive & Managing Director of Standard Chartered Bank, Ghana, said the success of every business organization depends on its ability to attract, develop and maintain the right talent.

She pointed out that human resource is the most important asset of any business entity through which the success of the entity rests. She called on organizations to reward staff- both junior and senior levels- for high and exceptional performance.

“We need to identify high performing managers and take steps to ascertain what keeps them from working so hard, Mrs Nettey declared.

In his welcome address, the Executive Director of the Institute, Ebenezer Agbettor, encouraged members to take advantage of the professional training programmes to build their careers and improve their skills.