The People Descended From Spartans 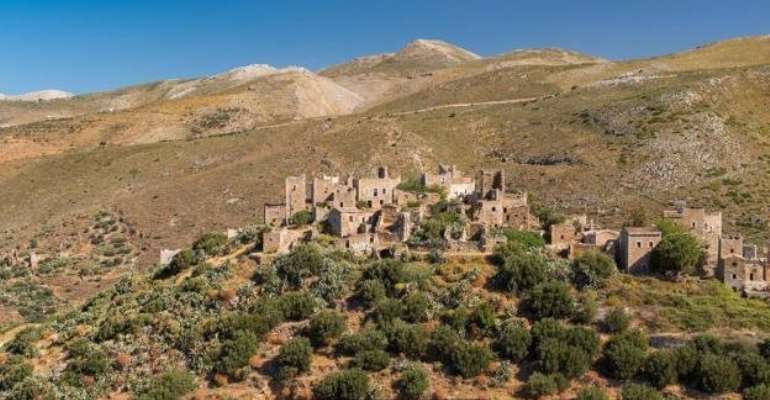 The Mani peninsula’s jagged, rocky cliffs jut from the Peloponnese at the southernmost tip of mainland Greece, forcing the landscape to heave and billow like ocean waves. From the steep hilltops, stone houses resembling small castles stand with their backs to the colossal Taygetos mountains and look out over the stoic Ionian Sea.

This is the land of the Maniots, a clannish community said to be descended from Spartans, the legendary warriors of Ancient Greece.

Here is your lalaggi,” said Giorgos Oikonomeas, handing me a crispy dough strip deep fried in extra-virgin olive oil. He had the build of a warrior – sturdy and broad-shouldered – but his wrinkled face was warm and relaxed.

Oikonomeas grew up in the village of Neochori on the Mani Peninsula’s north-west coast and never left. He spent his life running a kafeneio (a traditional Greek coffee house); now retired, he no longer serves customers, but rather spends his mornings at the kafeneio exchanging news with friends about family and occasionally politics.

As my teeth sunk into the crisp flesh of the lalaggi, the dough melting on my tongue, Oikonomeas explained that I was savouring a snack that was likely eaten thousands of years ago by Greece’s infamous soldiers. “Lelegas, the first king of Sparta, was probably the first one to manufacture it,” he told me.

“If you want to get a taste of what life would have been like in Ancient Sparta, look no further,” he said. “We are as Spartan as can be.” 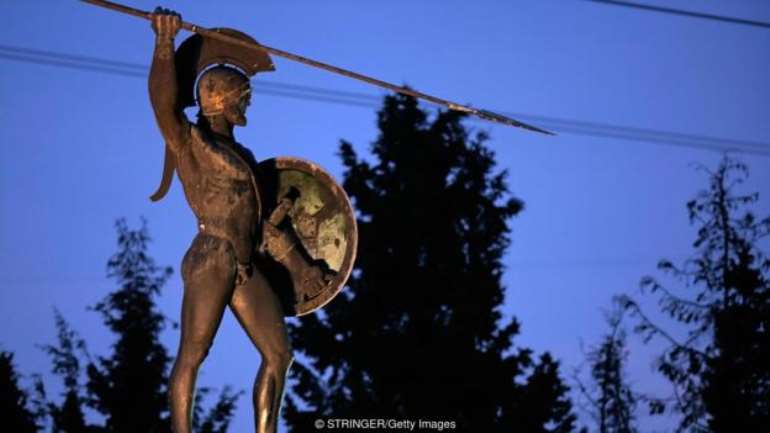 The Maniots believe they are descended from Spartans, warriors of Ancient Greece (Credit: STRINGER/Getty Images)

Nearly three millennia ago, when Ancient Greece was made up of ‘polis’, or individual city-states, much of the Peloponnese belonged to Ancient Sparta and its allies. Unlike the people of rival city-state Athens, who were artists and philosophers, the Spartans were fighters; boys were said to begin military training at age seven, challenging one another in physical competition before becoming full-time soldiers at the age of 20. Women, on the other hand, played no role in the military, but they often received a formal education and were allowed to own property – rights rarely afforded to women in other Greek polis. As a result, Spartan women were known for their independence.

After defeating Athens in the Peloponnesian War, Sparta reached the apex of its power in the 5th Century BC. But its dominance was short-lived: in 371BC, the Spartans were defeated by soldiers from the city-state of Thebes, sparking the downfall of Sparta. But the Spartans living on the Mani peninsula, sheltered from the rest of the Peloponnese by the Taygetos mountains, held strong, defending their territory for centuries from the Thebans, and later Ottoman, Egyptian and Franc forces, among others. The Maniots as they became known were just as treacherous on the sea as they were on land, dabbling in small-time piracy and frequently travelling to other coastal nations as mercenaries. They were reputed to be so ruthless that many conquerors simply steered clear. 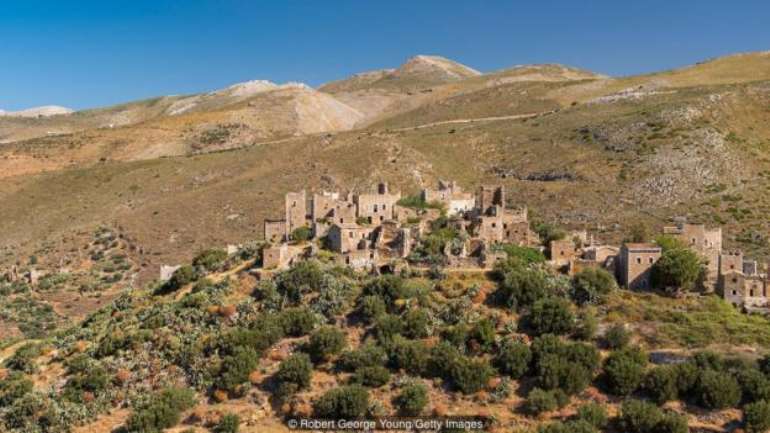 Sheltered from the rest of the Peloponnese, the Maniots remained self-governing until the 19th Century (Credit: Robert George Young/Getty Images)

The region remained self-governing until the mid- to late 19th Century, when the Greek government reduced the peninsula’s autonomy. But it wasn’t until the 1970s, when construction of new roads opened the peninsula to the rest of the Peloponnese, that the Maniots began to embrace newcomers.

The Maniots’ affinity for conflict wasn’t only directed at outsiders. During its time as an autonomous region, the peninsula was governed by different families, or clans; as these clans struggled for power, violent vendettas erupted that could last for years. “If a member of another family shamed one of your own, a family roundtable was gathered to decide upon the severity of the punishment,” Oikonomeas explained. “The punishment was inflicted on the whole clan and not just the perpetrator. Such was the Maniot sense of pride.” He noted that until recently Maniots would refer to their sons as ‘guns’ and their daughters as ‘barrels with gunpowder at the foundations of their house’.

Maniots now devote their lives to more peaceful endeavours such as olive farming. The region is known for its olive oil that’s fruity and full-bodied with a luscious golden-green hue; it’s used for everything from flavouring cheese to dressing anchovies to frying lalaggi. 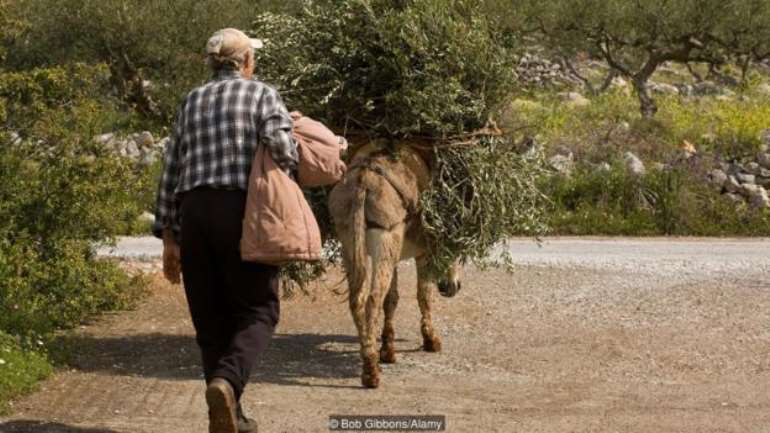 However, the region’s ferocious past is not forgotten. The Ancient Spartan maxim ‘ι tan i epi tas’, a phrase first uttered by Gorgo, wife of Spartan King Leonidas , before the king led the stand against invading Persian troops at the battle of Thermopylae in 480BC, can be heard on a regular basis. The saying translates to ‘with the shield or on the shield’ – a reminder that there are only two ways home from war: either carrying one’s shield as a winner, or being carried on it as a casualty. The adage is still commonly used today, both as a vote of strength and as a warning.

That’s not the only reminder. Almost anyone who was born and raised on the Mani peninsula will tell you they have Spartan blood in their veins. 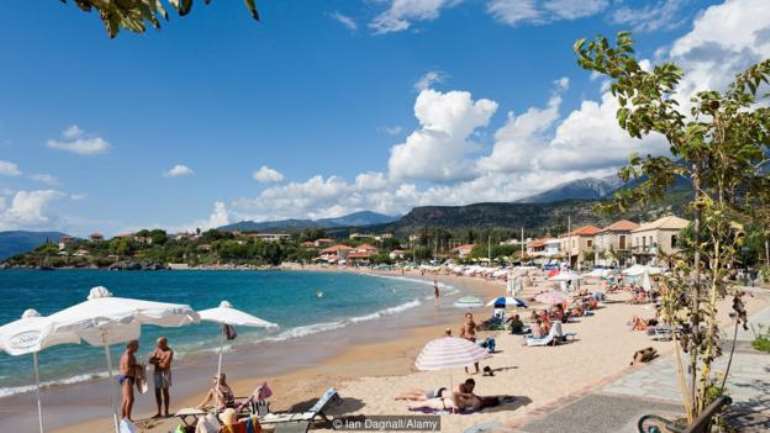 At 86, Oikonomeas still remembers his mother spooning hardboiled eggs into his mouth to make him stronger, insisting that as the only boy it was up to him to continue the family legacy. And he recalls watching his aunts gather the night before a family funeral to recite mourning songs at hair-raising frequencies, a ritual mentioned in Homer’s Odyssey.

But there’s no hard scientific evidence proving a direct link between today’s Maniots and the Ancient Spartans. Any trace of authentic Spartan DNA long ago disappeared; all that’s left of the warriors are their legends. Some historians and anthropologists say similarities between ancient and modern rituals – like the mourning songs – are strong indicators of a relationship between Ancient Spartans and modern Maniots, but Basil C Gounaris, professor of modern history at the Aristotle University of Thessaloniki, disagrees.

“Natural anthropology and history are not aligned,” Gounaris said. “Living in the same natural environment obviously leads the settlers to similar choices on many issues. But this has nothing to do with the DNA of the inhabitants.” 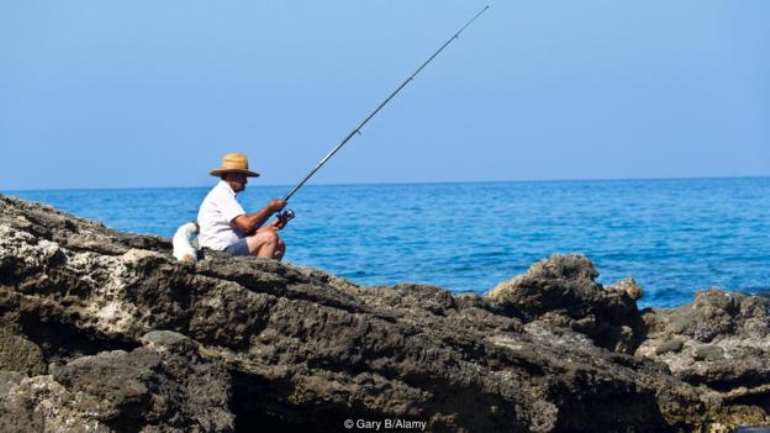 Some experts say similarities between ancient and modern rituals indicate a relationship between the Spartans and the Maniots (Credit: Gary B/Alamy)

Sunburnt crowds trickled into the kafeneio while Oikonomeas sipped his coffee, watching nonchalantly as the establishment’s new proprietor tried to keep up with the increasing number of patrons. The kafeneio is small, but its privileged position right across the street from Neochori’s main square means it’s almost always busy. About 10 square wooden tables have been squeezed into the tiny space, while the clatter of dishes and the whoosh of espresso machines ensure there’s never silence.

“I spoke with a professor who challenged your claims about an unbroken lineage from Ancient Spartans,” I told him as I wiped fried pastry crumbs from my fingers.

Unfazed, Oikonomeas passed me another lalaggi. “‘ι tan i epi tas’, you may tell him.”