Prostitutes Threaten To Name Gov’t Officials, Celebs who Patronize Their services If… 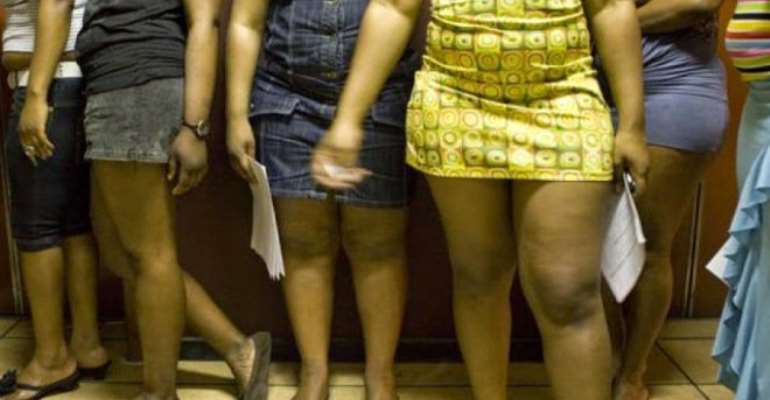 Some commercial workers across the country have threatened to publicly name high personalities including government officials, CEO's, media personalities and celebrities who come for their services if plans to ruin their business is not aborted.

According to them, their job is their only means of survival and since plans to stop the business has started in Tamale, it might extend to their side hence they are going to resist any kind of ploy to take them out of business.

Their threats follows the Metropolitan Chief Executive of Tamale, Iddrisu Musah superior's declaration to put a stop to prostitution within the Tamale metropolis by giving commercial sex workers in his jurisdiction up to October 31 to quit their business or face the full rigours of the law.

Speaking on the 'Maakye' educative program with Boamah Darko, Mayor Iddrisu Musah Superior stressed his readiness to ensure that prostitution in the Tamale metropolis is curbed.

"We are going to come heavily on all prostitutes and people who are involved in such business. So from the 31st of October, we will strike and now it has been brought to my notice that some joints here operating in the business are closing down, which is good. People think we are joking, we are not going to allow it here" He said.

This news however, has not settled down well with some commercial sex workers across the country who have declared full resistance on any attempts to take away their source of livelihood and has threatened to release a list of their clientele which includes men in high positions in the country.

Speaking with Nana Anokye of Kumasi based Fox FM, some prostitutes in Kumasi who disclosed their dealings with certain high profile personalities and some ministers said they would be compelled to reveal some names with images and videos of their escapades if they lose their business.

"If they kick us out of business, our only means of livelihood, then we will be forced to mention names and expose them" they swore.

Just as in Kumasi, some commercial sex workers who are in the capital city, Accra have also swore to go to any extent in order to save their business.

Speaking with Hot 93.9FM's reporter Awal Saed, they said, "There are no decent jobs for us to do in this country so we will not allow them to ruin the only means which enables us to provide for ourselves and our families-- so we will even go on demonstration if we have to."

Meanwhile, some men who seek the services of these sex workers have described Mayor Iddrisu Musah Superior's decision as harsh. They stated that, the existence of prostitutes have helped in satisfying their sexual urge and its abolishment could be disturbing.