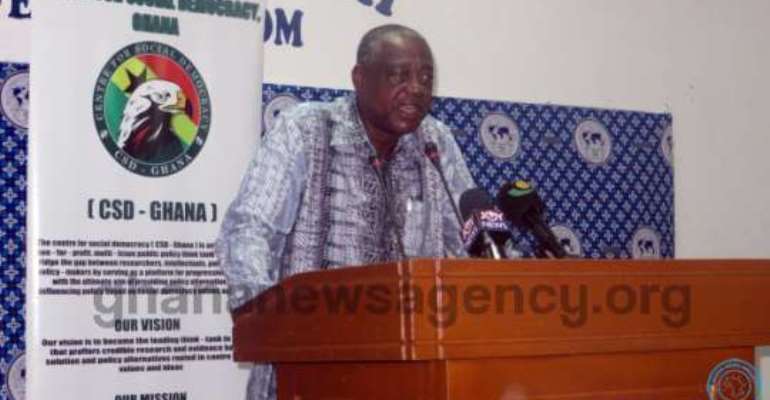 He said the rules of engagement in the security sector were neither known nor have national ownership and for that matter legitimacy if they existed at all.

'A comprehensive security policy would fill this gap by setting out Ghana's approach to security in terms of the threats we are exposed to and how they can be overcome,' Mr Kunbuor said in his presentation at the Centre for Social Democracy (CSD) Ghana's Public Forum on 'Parliamentary Oversight and Good Governance' in Accra.

The forum was organized by the CSD in partnership with the Political Science Department of the University of Ghana, with support from the Friedrich Ebert Stiftung.

Dr Kunbuor mentioned that the national security policy must be forward looking to include new risks.

He said the security policy must be consistent with Ghana's Constitution, International Humanitarian and Human Rights Laws, and Standards.

He said such a policy must outline the kinds of operations that were expected of security forces - defence and peacekeeping.

Dr Kunbuor said under such a new security policy, provisions must be made for Parliamentary oversight through reporting mechanism.

'The argument is often raised that almost all or most of the above issues exist in one form, or another in documents in Ghana.

'In the particular case of defence, reference is often made to the Operational, Training and Logistics (OPTRALOG) defence directives, which incorporates the General Headquarters' Policy Guidelines, Strategic Aims and the roles of the Directorates issued by the Chief of Defence Staff (CDS) from time to time,' he said.

He said these had to be formulated within Ghana's socio-historical, political and constitutional contexts.

'The responsibility for formulating such a policy is with the civil authority constituted as government and is adopted by the elected representatives of the people (Parliament),' Dr Kunbuor stated.

He noted that it was after a security sector policy was in place that the security strategies were drawn by the various agencies within the context of the policy and operationalized.

Adding that 'Parliamentary oversight then becomes clearer as the framework within which to security sector activities can be assessed and serves as a scientific basis for expending the taxpayer's money'.

Dr Kunbuor said: 'The stability and capacity of Members of Parliament in the Defence and Interior Select Committee is another factor hindering Parliamentary oversight'.

He explained that for instance, in the present Committee only two of the members were relatively old members; declaring that 'most members with years of experience have either left Parliament or have moved on to other committees perceived as more prestigious.

'The House is currently confronted with an entirely new membership of committee members, who are yet to learn how to climb the slippery ropes of the security sector. I must admit that, some members, out of personal interests are learning quite fast'.

Dr Kunbuor noted that Parliamentarians when in opposition become very strong advocates of Parliamentary oversight, however, as fate would have it they become the most conservative in opening up the security sector to Parliamentary scrutiny once they were in government.

He said in a Parliamentary democracy, the political party was a useful starting point in addressing parliamentary oversight of the security sector through security literacy.