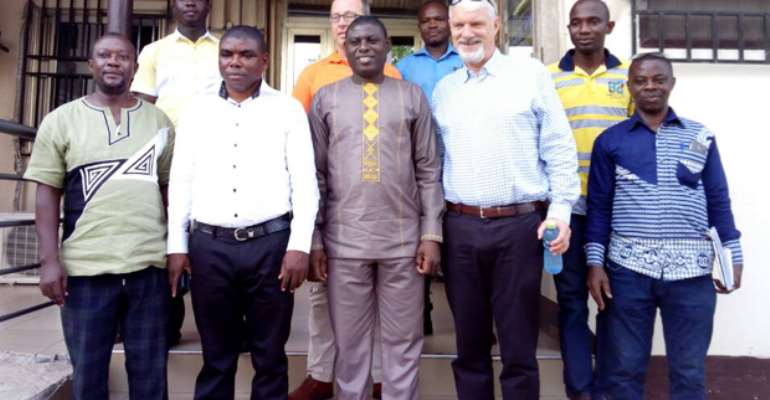 William Hanna (2nd Right) in a group photograph with his hosts

European Union (EU) Ambassador to Ghana, William Hanna, paid a day's working visit to the Western Region to inspect the progress made on the EU funded 96-kilometer Bogoso Junction-Ayamfuri road in the Prestea Huni-Valley District.

The MCE complained about the lack of drains at some portions of the road which would facilitate erosion.

He also mentioned the lack of road signs and markings especially on climbing lanes to serve as warning to heavy-duty trucks.

He, however, commended the EU delegation for the support and promised to offer them support in all endeavours.

The EU Ambassador and his team later visited Bogoso where they called on the District Chief Executive for Prestea-Huni Valley District, Mozart Owuh.

William Hanna explained that his visit was to enable his outfit identify some of the emerging challenges after the interim handing over of the road project about a year ago.

“We are here to inspect the project and take notice of all the problem so that we will profess remedy to them as required in the contract agreement, after which the official and technical handing over will be done,” he added.

He admitted that the Western Region contributes largely to Ghana’s socio-economic growth and therefore needed more roads, especially feeder roads, so as to enable farmers get easy access to their farms and also transport their produce to the markets.

The EU Ambassador hinted that EU has a policy of working with local authorities to help reduce poverty in partner countries such as Ghana.

The Prestea-Bogoso DCE, Mozart Owuh, also mentioned the lack of branch or trunk roads as some of the challenges encountered after the interim handing over was done.

He also cited wrong spelling of the names of some towns and villages on signposts.

“We have a number projects that will be incorporated in the One District, One Factory policy of the current government to create more jobs for the teeming youth, he said. This policy constitutes the basis for a grant contract between the EU and the Western Region,” he added.

The grant, he explained, had facilitated the collaborative engagement with relevant stakeholders in the field of agriculture, adding that “we believe that the Planting for Food and Jobs programme will not be left out either in the policy framework as development partners.”

Delaying To Release Seed Funds For Purchase Of Cocoa Unprece...
38 minutes ago

Buhari Must Show Willingness To Dialogue With Protestors – A...
38 minutes ago