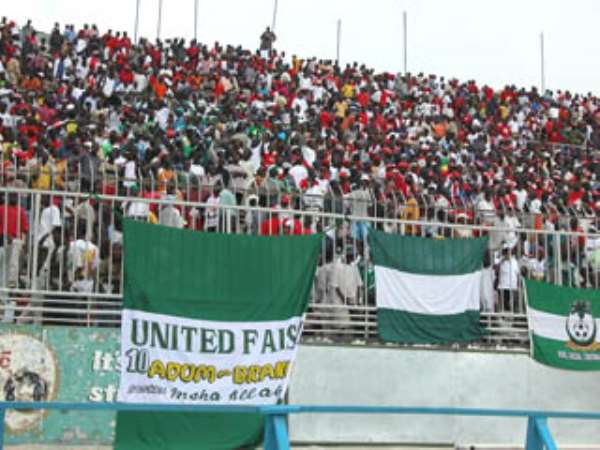 A rare explosion of two emerging rivals - Kumasi-based King Faisal and Liberty Professionals will be witnessed at the Baba Yara sports stadium in Kumasi on Sunday when the two teams clash in their 5th week outstanding GT premier league match.
The match was declared outstanding, to enable King Faisal honour their Continental assignment.
The match-up of the two sides, no doubt will be full of fire works, as King Faisal's unbeaten record is put on the line.
And as if to demonstrate their battle readiness for the Sunday's duel, both Faisal and Liberty went through their respective matches last week with distinction.
While King Faisal jumped into the money zone of the CAF Confederation Cup competition at the expense of Red Arrows of Zambia, Liberty Professionals sent their fans jubilating with ecstasy with an emphatic 2-0 win over Gomoa Fetteh Feyenoord.
With such a fitting setting duel, there is no doubt that the stakes would be higher and both sides would go into the game with their confidence and determination at its peak.
For Liberty, Kumasi appears to be a waterloo for them and victory would be historic in many respects, as they make no secret of their ambition to do so.
"We've beaten Faisal in Kumasi before and repeating it should not be beyond our capabilities," an official of Liberty told The Chronicle.
But Alhaji Grunsah keeps insisting that his ambition was to win the domestic league on a clean slate as well annexing the CAF Confederation Cup this year.
One would be curious to see whether the magic of Eric Gawu, Abubakar Yahuza, Prince Antwi and Ben Wilson, coupled with Illiasu Yahaya and Mohammed Suraju's experience would be able see King Faisal through this encounter.
Liberty's technical director, Jones Attuquayefio will depend greatly on the services of goalkeeper Kotei Blankson, Hanson Agyeman, Mustapha, Michael Osei, Michael Helegbe, Felix Baffoe among others.
Of course, matches between the two are not easy to predict but I have a funny feeling that Liberty will carry the day.