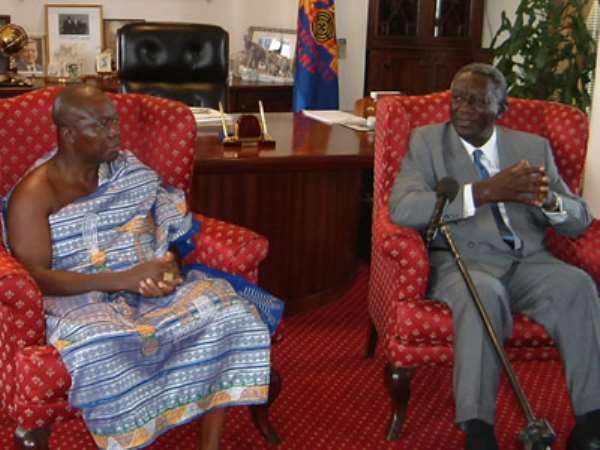 ... Don't push us to the wall, else ... Manhyia-Palace(Kumasi), May 20, (Chronicle) -- The Asantehene, Otumfuo Osei Tutu II, has dared critics and people with anti-Ashanti feelings to desist from mudslinging and indicting Asantes through their submissions and comments at various fora throughout the country. He has urged these Ashanti bashers to be circumspect and, in their attempt to question the appointments of public officers of this nation by President John Agyekum Kufuor, not to drag Ashantis into it.
Speaking at the resumed sitting of the Kumasi Traditional Council's (KTC) at the Manhyia Palace in Kumasi yesterday, a charged Asantehene indicated that the government of the New Patriotic Party (NPP) has nothing to do with the glory of Asanteman and the worldwide recognition of the Golden Stool, which is the symbol of Asanteman.
“I want to tell Ghanaians that the glory of Asanteman and the high recognition given to the Golden Stool by diplomats and other High ranking people of various countries is not the making of the ruling NPP government,” Otumfuo stated in Asante Twi.
According to him, it is through the tireless efforts of his ancestors, predecessors and the one and only Fetish Priest, Okomfo Anokye, who commandeered the Golden Stool from the heavens that Asanteman was born.
He added that long before Ghana came into existence there was Asanteman which had gained much recognition and that the President Kufuor-led administration has no contribution to the visit of dignitaries at his palace.
“This has been a practice over the years before Mr. Kufuor became the president of the republic of Ghana.”
The Ashanti king bemoaned the impression created in some circles that President Kufuor is promoting the Kingdom of Asantes and for that matter the Asantehene in particular at the expense of other chiefs.
According to him, whichever way people look at those visits and donor support for his developmental agenda would continue till “thy Kingdom come.”
The Asantehene stated soon after his visit to South Africa and Sierra-Leone, he also received another invitation from the King of Cote-d'Ivoire, but he could not honour it because of fatigue and other circumstances, adding that he was scheduled to travel to Morocco by September, this year on the invitation of the Moroccan king and other high profiles.
He contended that President Kufuor and his government did not know about all these, including the recent visit of the Zambian President, Mr. Patrick Mwanawasa.
He pleaded with Ghanaians to remain united under one national identity and stop politicizing issues by way of whipping up ethnic sentiments in order not to plunge the country into a state of division and confusion.
According to the King, if those with the anti-Ashanti feelings do not put on the brakes on anti-Asante feelings and continue with the unethical conduct by pushing them to the wall, Ashantis would be compelled to defy all odds and go after them.
“Don't push us to the wall or we will be compelled to strike,” he cautioned.
He continued that when you come to Ashanti region, there are various ethnic groups and communities whose allocations he personally signed and did not see why there should be so much uproar against any move by him to put up a structure in the capital, Accra.
Meanwhile, the Asantehene has refuted the allegation that he is planning to build a palace in Accra and said he did not have the slightest idea about the allocation of the said plot in question in Accra.
In any case, Otumfuo Osei Tutu did not see anything wrong with the idea since it takes strangers to build a community.