JH Mensah betrays colleagues ..or did he? 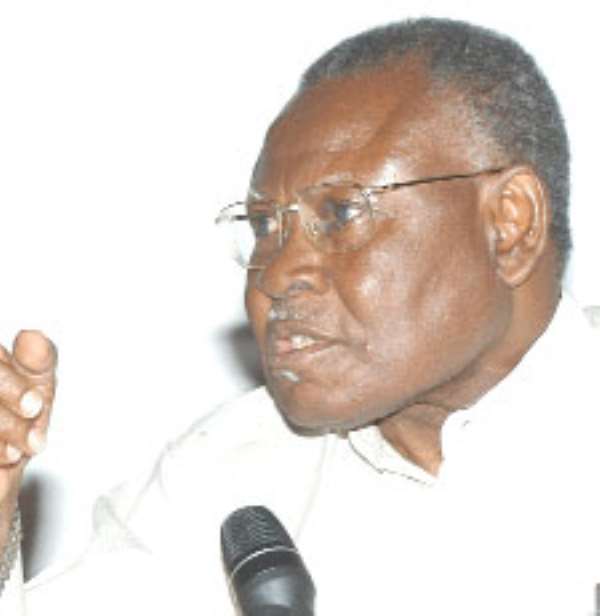 ... admits conspiracy with majority over GETFund The Senior Minister, Mr. J.H. Mensah, yesterday caused a stir in parliament and shocked his side of the house when he made a submission that he secretly went behind them, as then minority leader, and conspired with Mr. J.H. Owusu Acheampong to get the GETFund bill passed in 2000. “I conspired with Owusu-Acheampong to get the law passed. I have never wanted to talk about it but I have to correct the perception. I conspired with the majority leader to get the Get Fund Bill passed,” he stressed. The senior minister, said this, when the minority side of the house argued that the NPP government is now enjoying the benefits accruing from the GETFund and therefore wanted the NDC government to be given the necessary credit.

The NPP then in minority side vehemently opposed the addition of two and half percent increase in VAT for the Get Fund. It was led by Dr. Kofi Konadu Apraku, Kan Dapaah and Kwadwo Baah Wiredu.

Mr. Owusu-Acheampong, who has ceased to be in Parliament, has also in an interview on Accra-based Joy FM, denied the senior minister's submission, saying the Hansard bears ample testimony to the minority's position at the time.

Now that the senior minister's submission has not got down well with members of his side, all are anxious to know the next step they are going to take.

The amount was considered for approval by the committee on the whole which is made up of all members of the house.

In a report to the house, the committee said the amount represents an increase of 57.4% over that of year 2004 and is expected to accrue to the fund. It took into account also, the pressing needs of schools and institutions in the country.

The committee observed that in determining the allocation of funds for projects, the Ministry of Education and Sports (MoES) proposed that priority should be accorded to academic facilities such as classrooms and projects which are well advanced (at a stage of 75% completion or above) as well as those which would be to the advantage of the most needy pupils and students.

In view of this, 40% of the total amount of five hundred and seventeen billion cedis (¢517,000, 000) allocated to the sector for infrastructure and academic facilities, would be reserved for the completion of some on-going projects.

It said some members expressed dissatisfaction with the slow pace of infrastructural developments being supported by the fund on all the campuses of the University of Development Studies (UDS) and that they were not fully convinced with the explanation given by the administrator that it was attributable to lack of adequate capacity for the management of the execution of the projects.

The committee took notice of the fact that an amount of thirty billion cedis (¢30,000,000,000) has been allocated to support the continuation of the construction of classroom blocks for the three old universities, namely the University of Cape Coast, the Kwame Nkrumah University of Science and Technology and the University of Ghana, Legon.

In response to the needs of accredited private tertiary institutions, an amount of five billion cedis (¢5,000,000,000) was allocated to cater for the transportation needs of these institutions.

It was noted also that in line with government policy to emphasize on Technical and Vocational Education and Training (TVET), a sum of forty billion (40,000,000,000) has been voted to increase resourcing of the VOTEC resources centers, revamping of the various technical institutions and the general implementation of the new policy in the sector.

The committee recommended that graduate students who benefit from funds allocated for the training of brilliant students as faculty members and for research projects should be bonded for a specified period to let them lecture at the Universities and help curb the perennial shortage of lecturers at the universities and polytechnics.

It noted that the fund should consider providing text books and reading materials to schools to help solve the shortage of books in schools and the GETFund Secretariat should be strengthened to ensure a more effective monitoring of projects it supports.

Members of Parliament were asked to be encouraged to establish special scholarship schemes for their constituents in collaboration with the GETFund to promote equitable distribution of scholarships among Senior Secondary Schools and third cycle students.

The amount allocated for the MPs' identified projects should be at least maintained or increased in considering variations and inflationary trends in the prices of materials in the country.

The Committee urged the GET Fund to ensure a faster rate of development on all the campuses of the University of Development Studies (UDS) by making more Funds available.