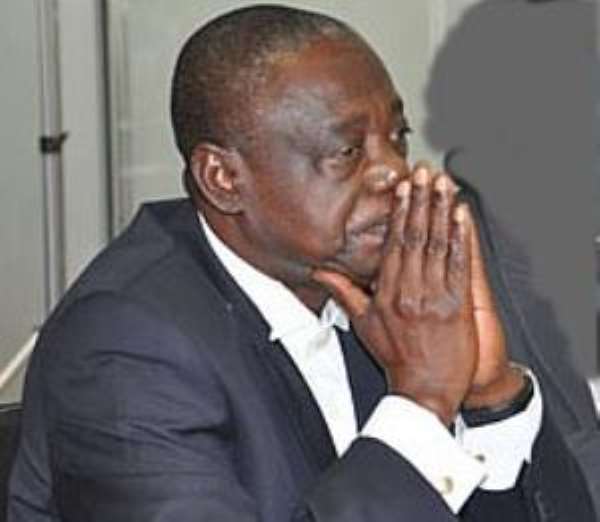 The former minister of defence erstwhile President John Mahama's Administration, Hon Benjamin Kunbuor has called for an early Congress to save NDC and blames the party's defeat on corruption.

According to Cadres they want the current leadership of the party to call for an early Congress to forestall the despondency that is fast creeping in, to be exploited by adventurists

"The NDC which had won four out of the six previous elections under the Fourth Republican Constitution on the platform of probity and accountability had no response to the numerous accusations of corruption and incompetence. This gave

credence to the adage that it is the ruling government which loses elections and not the opposition party that wins elections", Cadres underscored.

Below is a full Statement

PRESS STATEMENT
TO ALL MEDIA HOUSES

The National Democratic Congress (NDC), suffered a crushing defeat at the December 2016 Presidential and Parliamentary elections. The magnitude and spread of this defeat across the country is unprecedented. Yet there has been a deafening silence from the leadership of the party, giving the New Patriotic Party (NPP) an unchallenged political space to re-instate its dominance; while the rank and file of our party look on in despair. The leadership of the party was dump founded since they were over confident of a resounding victory and therefore could not provide appropriate response to the anger and bitterness expressed by the members of the party in the aftermath of the defeat.

The NDC, as we are aware, was born out of a revolution and was crafted with the principles and values that were the main ingredients for the prosecution of the National Democratic Revolution. The National Democratic Revolution was proclaimed on 31st December 1981 with a view of creating a firm basis for the attainment of social justice grassroots participatory democracy, probity and accountability in public life, rapid national development and social progress. These were to be attained through mass mobilization, grassroots organization, discipline and hard work by the masses and patriots of this country. Indeed, the evolution of the contemporary multi-party democracy that we enjoy today, was based on the struggles of ordinary people for political space and voice.

The NDC has long held the belief that the people of this country will not surrender their independence and abandon their struggle to restore hope and dignity to the common man. The NDC has been structured in such a way as to enlist the active support and participation of the people at the grassroots and in the communities.

This is to unite effort, promote democracy and enhance discipline. There is no substitute for grassroots mobilization and organization for electoral victory. Let us be reminded of the axiom that elections are won long before election day. The election day is for pulling your members, supporters and sympathizers to the polling booth to cast their votes. They should have been identified, canvassed, accepted to be on your side and encouraged to turn out massively on polling day. There is no short-cut to this chain of activities. Serious grassroots mobilization at the communities to identify our allies and sympathizers to persuade and galvanize their support onto the NDC platform was a duty members needed to execute with commitment, pride and dedication.

A closer and more critical examination of our own traditional values and principles of socio-economics and political governance reveals the same idealism as embedded in social democracy in the west.

The mmbriddled apeing of pure capitalism has had the effect of alienating the overwhelming majority of people from participating actively in the economic development of our dear country.

As a social democratic party, the NDC is the natural home of the Hard-working people of Ghana, including workers, farmers and fishermen, progressive students,

the down-trodden, the disadvantaged and the socially-excluded. These were to be mobilized to the mainstream NDC for our electoral purpose. Contrary to this conventional wisdom, the NDC 2016 campaign was characterized by flamboyant rallies full of opulence and fanfare devoid of any political or ideological substance that did not resonate with the actual people on the ground. The structures of the NDC at the National, Regional and Constituency levels refused to work at the grassroots. The Branch executives were virtually sidelined when logistics and funds were provided from the higher levels. Members at the Branch level were frustrated and neglected. The NDC campaign in 2016 neither energized the base nor encouraged new people to join the party.

About one million of our own people who voted for the NDC in 2012 felt excluded, alienated, disillusioned and abandoned by the party they have loved ever since its inception in 1992. They therefore decided to sit on the fence and watch the unfolding events.

The cadres of the National Democratic Revolution, who had worked hard to unite their forces into the United Cadre Front (UCF) and had been accepted and endorsed by the National Executive Committee at a press conference organized at the National Headquarters of the party were deliberately sidelined and ignored in the whole campaign period. Indeed, before and during the 2016 elections, these Cadres were seen by some leaders of the party and former government appointees as a plaque to be avoided.

The NDC government was seen to have abandoned the policies and programmes tailored to benefit the ordinary working people, but was happily pursuing projects that largely benefitted the elite and the privileged class in the society. It was misled by ideologically unclear and persons with dubious commitment to social justice into running an IMF austerity programme in an election year. They have certainly served their neo-colonial masters well and pawnedthe masses of the party and the country at large.

The NDC which had won four out of the six previous elections under the Fourth Republican Constitution on the platform of probity and accountability, had no response to the numerous accusations of corruption and incompetence. This gave credence to the adage that it is the ruling government which loses elections and not the opposition party that wins elections.

The NDC leadership did not only show clear signs of exhaustion from 8 years of government, it also displayed a lack of ideological commitment to social democracy if at all some of them understood it. Key operatives became businessmen and women with business proposals in their armpits as a past-time and therefore lacked the zeal and focus to drive a successful election. Yet, others were bankrupt of new ideas, while some appointees demonstrated arrogance, showed vulgar opulence and self-conceitedness in the mist of poverty and social deprivation.

From the foregoing characterization, it became clear that the NDC was going to struggle to hold on to power in the 2016 elections. No wonder the NDC suffered a humiliating defeat never seen in the annals of the party's political history. It is therefore not an understatement that the party needs reorganization if it is to be relevant in the current political dispensation and to recover itself. In doing so it has to admit the bitter truth that the party has been contaminated by its government with the connivance of some of its leaders with a perception of corruption.

This is the time for sober reflection on and a return to the party's core principles and values on our quest to recapture political power. We therefore need credible, committed, ideologically clear, and dedicated party cadres and activists who believe in grassroots mobilization and organization to offer themselves for the leadership of the party in the reorganization exercise. Our resolve should be to save the party and those leading members who can still be saved but not the bad cases. Let us tone down on some claims we make for our government because there is no scientific basis for a one-sided equation. Let us soberly reflect also on our deficits in governance and how that has brought us to where we are today.

It would be in the interest of some of our party leaders to stop the infantile pontification now, as to who can lead us into victory in 2020. They seem not to know what is boiling beneath their comfortable feet. Victory in 2020 for who?

We urge the current leadership of the party to call an early Congress to forestall the despondency that is fast creeping in, to be exploited by adventurists. But before doing so, the fraudulent party register that was hurriedly put together without first piloting it to access its integrity should be replaced. We call on well- meaning members of the party to challenge its use, if need be, in court.