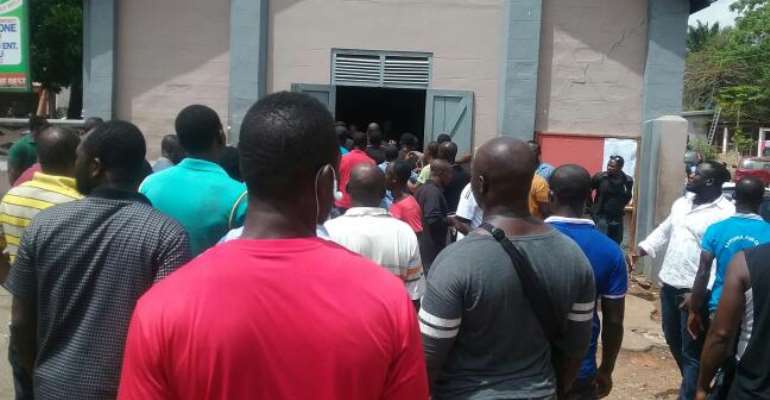 The Party hierarchy must not countenance what is happening. What is going on should not be tolerated. The Party's internal sanctions against of offenders must be activated.

These hoodlum calling themselves NPP security is usurping the authority of the state and must be rein in by the Nation Security Institutions before things get worse.

Such impunity must not be tolerated. Allowing any further abuse have the tendency to destroy all the goodwill. They should be pursued and dealt with seriously.

Bernard Antwi Boasiako and Kennedy Agyepong must be censored and reprimanded for the uncivilized consent to the barbaric engagement of the vigilante groups. We don't live in the jungle.

“Wontumi” sarcastic attribution that the hoodlums paid only a visit is highly diabolic whilst Kennedy's outbursts very obnoxious, unbecoming of a Parliamentarian.

Kennedy knows very well that such attitude is not countenance from where he came down from to pursue his political career.

Yes, in the United States. The nonsense must be stopped!

He should be made aware and to understand that we are civilized society therefore that gangsterism attitude of his belongs to the past.

The advocators of the hoodlums should bear in mind that, those who take initiatives at work do so not because they are stupid, but because understand the concept of responsibility.

The advocators of the hoodlums should bear in mind that, those who are willing to help you do so not because they owe you anything, but because they see you as a true friend.

Those who often text you do so not because they have nothing better to do, but because you are in their heart.

One day all of us will get separated from each other. We will miss the conversations of everything and nothing to hold onto except the dreams that we had.

The days will pass by, months, years, until this contact becomes rare. One day our children will see our pictures and ask, “Who are these people?

At that time we will smile with invisible tears and you will say….IT WAS THEM I HAD MY BEST DAYS OF MY LIFE WITH. It is about time the Party did something to curb and nib in the bud the mushrooming of the vigilante groups.

I think the approach must be on the scale as the Media is doing in response to the galamsey menace.

They should not be treated with kid-gloves. We have responsibility to keep and ensure law works.

To me, I think people who don’t think it’s a big deal to toss a plastic bottle in the garbage are not only being irresponsible, but I think they are being disrespectful of all of us.

The excuse been offered by some Party’s Executives are inadmissible and tantamount to the sanctioning of criminal activities. They should wary of the hoodlums should tread cautiously else…….hmmmmmm!

There are many who worked for the Party who are unsung heroes and are hurt by prevailing events.

The Party must stand up to its Moral values. It must not shield or be seen as condoning crime. It is brave to admit your mistake. You may be scared of being scolded. But it is the only way for you to be free from guilt.

Impunity Must Not Be Tolerated.