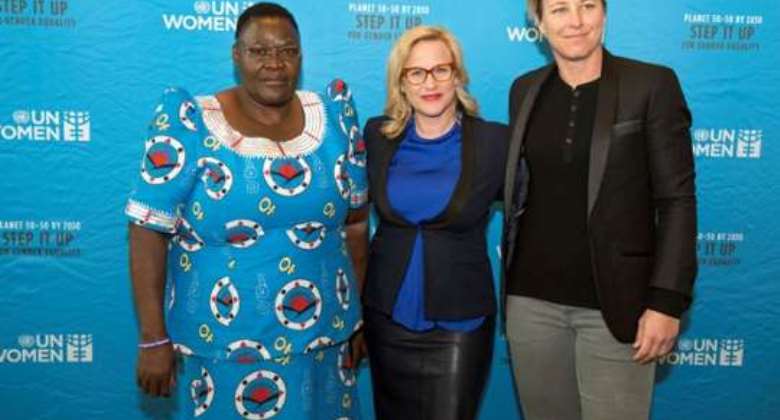 'The much-needed positive developments are not happening fast enough. We also need to work together to make sure we reach a tipping point in the numbers of lives changed,' Dr Mlambo-Ngcuka stated at the opening of the 61st UN Commission on the Status of Women (CSW61) at New York.

'We need swift and decisive action that can be brought about by the world of work so that we do not leave women even further behind,' she said.

Representatives of Member States, UN entities, and Economic and Social Council (ECOSOC) accredited non-governmental organizations (NGOs) from all regions of the world are attending the ten-day session, which is on the general theme: 'Women's economic empowerment in the changing world of work'.

She noted that woman who were denied sexual and reproductive health and reproductive rights and services; and women facing discrimination on multiple and intersecting fronts over and above their gender: such as sexual orientation, disability, older age, race, or being part of an indigenous community.

Dr Mlambo-Ngcuka explained that women in the informal sector, and care givers, those who provided services in the home were much needed to sustain society.

'Almost all women do some form of work. If you are a woman you are a worker-period. Virtually all economies rely on the unpaid care and domestic work that is largely provided by women and girls. Yet this form of work positions masses of women uniquely to be 'left behind'.

'Positive changes in the world of work must enable care work to be valued and to be shared by parents and within the family unit. This will bring about far-reaching positive changes for women, society and economies,' she said.

She commended the Chair of CSW, Mr. Antonio de Aguiar Patriota, as well as the UN Women team across the world for their hard work and preparations, including the important regional Pre-CSW consultations that 'allow us all to get together in this session and be as ready as we are.

'I would also like to acknowledge our Secretary-General, at his first Commission in his new capacity'.

It reviews the progress made by women and girls, and assesses the remaining challenges. It is a barometer of the progress we are making on achieving a world that is free of gender discrimination and inequality, a world that leaves no-one behind.

It will help us measure achievement of the implementation of the 2030 Agenda for Sustainable Development. It also helps us to pursue action in priority areas and benefits from the Commission's Agreed Conclusions.

The UN Women Executive Director said the Commission must also look at how to increase the participation of these women, as well as women's participation in male-dominated sectors that have meaningful economic benefits.

She said the Commission must make fresh gains in how to bring the informal sector into a structured and meaningful economic relationship with benefits, respecting the rights of women in this sector.

'They are in the rapidly growing urban communities, as well as in rural areas. They are the under-the radar and under-valued cogs in the bigger wheels of the formal economy.

'They are the low-cost farm workers, flower sellers, street food vendors, care workers, and home-based producers of garments and car parts. Almost none of them have legal or social protection,' she said.

Dr Mlambo-Ngcuka also acknowledged that there are a myriad of laws in more than 150 countries that discriminate against women. 'This falls right in your court as decision-makers and law makers.

'And we have to address the stereotypes, norms and practices that discriminate against women and girls, and have for generations denied women career paths on a par with men.

'In this Commission, you have an opportunity to assist us to turn back these practices and to introduce changed practices both in businesses and in institutions. The global pay gap, at an average of 23 per cent, means that women are clearly earning consistently less than men,' she said.

The UN Women Executive Director said Women regarded this as daylight robbery. The deficit has robbed generations of women of income, future security and just reward. Each year they worked three months more than men for equivalent pay.

She said in the digital age, 'we also seek technology-enabled solutions for women. We must therefore resolve to act on gaps in the access to technology that unfortunately has been growing. There are some 200 million fewer women online than men, and the gap is worryingly widening'.

Dr Mlambo-Ngcuka said the Commission can drive faster change for multitudes of young people and older people who need to be ready for this future world of work.

'Too few people are impacted by the actions to date that we have been driving in the economy. Change is not yet addressing the root causes of women's economic injustice, nor is it fulfilling their rights,' she said.

One Million U.S.-Donated Vaccines Arrive in Ghana
55 minutes ago