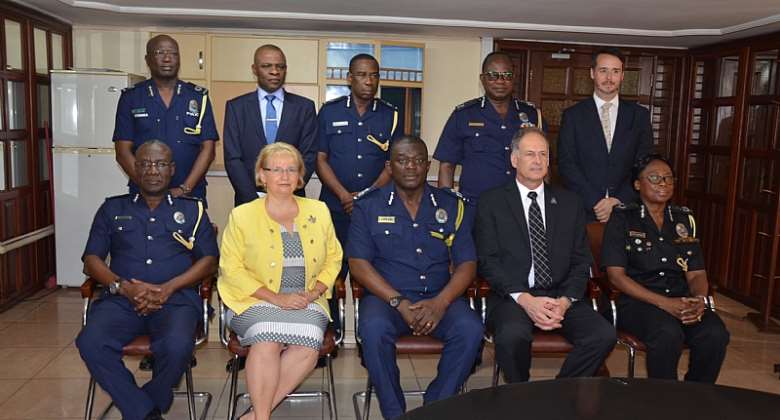 The Acting IGP in group photographs with his Canadian guests

The Acting Inspector General of Police (IGP) David Asante-Apeatu last hosted two top diplomats both of them expressing their readiness to assist the law enforcement institution in the execution of their mandate.

It has his first high profile engagement with players in the diplomatic circle with the Canadian High Commissioner to Ghana, Madam Heather Cameron especially, pledging to assist the Ghana Police Service in areas of the Service's priority interest as a means of developing the law enforcement institution.

During the envoy's visit the two discussed bilateral issues during which Madam Heather Cameron encouraged the Police Service to “just reach out to us if you have any needs.”

Tracing the relationship between Ghana and Canada to some hundred years back, Madam Cameron underscored the need for a strengthened relationship between the two Commonwealth nations, saying they have each other's interest to cater for. She also revealed that the Canadian Government has made a renewed commitment to peacekeeping in Africa, emphasizing that “we will be happy to work with the Ghana Police “.

IGP David Asante-Apeatu, on his part, expressed his gratitude to the High Commission for its support to the Police over the years, assuring the officials of Police co-operation.

He solicited the support of the Canadian Government in the area of capacity building for the personnel to enable the Service build a world class Police Institution capable of delivering a first class service.

Mr. Asante-Apeatu also offered to put the services of the Police at the disposal of the High Commissions in the fight against trans-national crimes.

In a related development, the UN Secretary General's Special Representative for West Africa and the Sahel, H.E. Dr. Mohammed Ibn Chambas, another guest of the Acting IGP at the Police Headquarters last week, congratulated the Ghana Police Service for the “extremely competent manner in which the Police conducted themselves during the 2016 general election” when he called on the Chief Constable.

He said everything happened exactly as they had been briefed by the Police Administration before the polls.

He also expressed the UN's appreciation to the Police for the fruitful co-operation the world body continues to enjoy from the Ghana Police, after having worked closely together for a long time.

Dr. Ibn Chambas extolled the virtues of Ghana, saying that “internationally, Ghana continues to shine”. He also assured the Police of the UN's continuous support, emphasizing that the UNDP Resident Coordinator would always be at the disposal of the Ghana Police for any assistance that it may need.

In turn, the Acting Inspector-General of Police, Mr. David Asante-Apeatu pledged the commitment of the Ghana Police Service to the cause of the United Nations; “anytime we are called upon to serve in the international arena, we will readily avail ourselves”.

The Acting IGP thanked the UN for appreciating the Police, and expressed the hope that in future, democracy would have been so ingrained in the system that there will be no need to commit that huge number of Police officers to election.

The Director-General/Technical, COP/Mr. Frank Adu-Poku and Director/International Relations, ACP/Mr. Michael Avadetsi solicited the assistance of the United Nations in the area of equipment and logistics for the Formed Police Unit (FPU) of the Service in their operations in international missions.

The UN Secretary General's Special Representative for West Africa and the Sahel, H.E. Dr. Ibn Chambas assured the IGP that, he would take up the request of the Police seriously for consideration.

In both engagements, members of the Police Headquarters Management Board were in attendance.