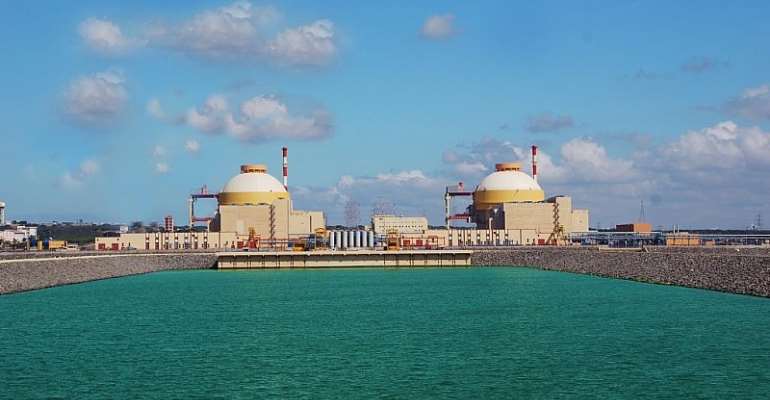 The second 1,000 MW atomic power reactor at the Kundankulam Nuclear Power Plant (KNPP) in Tamil Nadu has attained its maximum capacity for the first time. Unit №2 adds additional 1,000 MW of electricity to the southern grid, bringing the total amount of nuclear energy generated in the country to 6,780 MW. The Kudankulam units are the country's most powerful reactors.

“After obtaining the permission of the Indian regulatory authority, the reactor plant was brought to 100% nominal level of neutron power. We have reached the last stage of dynamic tests at nominal power. According to schedule, this stage is to be completed during the first decade of February. This stage will be followed by 72-hour tests with further transition to the stage of one-year warranty operation of the power unit”, said Mr. Andrey Lebedev, ASE Group of Companies’ Vice-president for projects in South Asia.

“It is planned to perform comprehensive dynamic tests for 15 days, which will confirm the design parameters of the power unit main system and its dynamic stability in certain modes of disturbance of normal operation,” he added.

The unit started nuclear fission on July 10, 2016 and was connected to the southern grid on August 29. After operating it for some time, the unit was disconnected for testing the parameters. Thereafter, power generation was gradually increased at several stages.

The Nuclear Power Corp of India (NPCIL), the operator of Kudankulam NPP, has confirmed that the second reactor was behaving exceptionally well as it reached maximum generation capacity.

Construction work for Units №3 and №4 has started in October last year. The power plant in India’s southern state of Tamil Nadu was built together with Russia, becoming their first joint nuclear energy project. A total number of 12 power units are scheduled to be built in this country upon the Russian projects. This will allow to cover a deficit of energy capacities in India.

Additional information:
Construction of second unit was completed in July 2015 and was loaded with its first fuel in May 2016. Following the completion of safety tests, it was attained on 10 July. On 29 August 2016 Kudankulam NPP Unit №2, constructed with the technical assistance of ASE Group of Companies, was connected to the power grid of India. All the works were conducted jointly by Indian and Russian specialists in automatic mode in strict compliance with the schedule and safety regulations. The permit for loading of the fuel assemblies was issued by the Atomic Energy Regulatory Body of India (AERB) after a detailed review of all the Safety Reports prepared earlier.

ROSATOM is the Russian state atomic energy corporation bringing together over 262 000 people in 360 enterprises and scientific institutions including all Russian civil nuclear companies, research organizations and the world’s only nuclear-propelled icebreaker fleet. With 70 years' expertise in the nuclear field, ROSATOM remains its leader. ROSATOM is №1 in the world simultaneously implementing projects of NPPs construction.

On 19 January, Rosatom and Iranian Atomic Energy Organization have signed the documents relating to Iranian-Russian cooperation in peaceful uses of atomic energy.

In particular, Behrouz Kamalvandi, Vice President at the Atomic Energy Organization of Iran and Nickolay Spasskiy, Deputy Director General at Rosatom signed the road map to implement the Memorandum on the development of cooperation in peaceful uses of atomic energy of 11 November, 2014.

The Memorandum of 2014 envisages that Rosatom will build up to eight new nuclear power reactor units in Iran upon the agreement - four at Bushehr NPP and four at another, yet to be determined site.

According to the protocol to the intergovernmental agreement, the construction of an additional four power units with VVER reactors will be implemented upon a turn-key basis at the site of the Bushehr nuclear power plant, as well as four similar power units on another site in Iran, to be determined by the Iranian party at a later date.

The parties also agreed to ensure the maximum possible participation of local enterprises and organizations in all works related to the construction of new power units on the sites, their operation and decommissioning.

The entire construction project of the nuclear power units in Iran, including equipment and nuclear fuel supplies, will be under the strict IAEA safeguards.

Under the protocol, Rosatom will provide nuclear fuel "throughout the entire lifecycle" of the eight new power units. Used nuclear fuel will be returned to Russia for reprocessing and storage.

Rosatom will arrange the training of Iranian specialists in the operation, servicing and corresponding engineering support for the new plants, as well as in the field of regulation of nuclear and radiation safety.

ROSATOM is the Russian state atomic energy corporation bringing together over 262 000 people in 360 enterprises and scientific institutions including all Russian civil nuclear companies, research organizations and the world’s only nuclear-propelled icebreaker fleet. With 70 years' expertise in the nuclear field, ROSATOM remains its leader. ROSATOM is №1 in the world simultaneously implementing projects of NPPs construction.