President Nana Addo-Dankwa Akufo-Addo Is Not A Magician 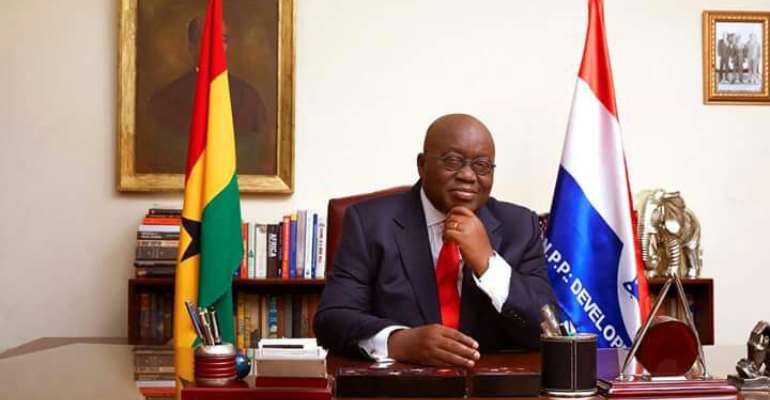 The euphoria that ushered in President Kufuor’s administration, sixteen years ago, was electrifying. The expectations, though I stand to be corrected, was much astronomic than it is now. Sadly, that energic ecstasy petered out like a morning mist in no time . In less than a year, Ewura Ama’s classic mid 70s hit was revived and became the vogue – Medofo Adaadaa Me. The reality was that the youth at the time who bought into President Kufuor’s promise of providing jobs felt jilted when after a year in office they saw no signs of that ubiquitous pledge seeing the light of day.

A lot of water has gone under the bridge between 2001 and 2017. They are two different eras, but the same conditions. Nana promised the Sun during the electioneering campaign, and without doubt, has whet the appetite of the whole country. There are those, for example, the poor who bought into the notion of free education on one hand, tax reduction for businessmen on the other, jobs for the unemployed and a litany of others. All these group of people have the legitimacy to be expectant.

This unfortunate baggage of democratic politics stems from the fact that it is very difficult to win against the incumbent, especially in Africa. The deck is almost stack in their favour. The most lethal is human inertia. People find it very difficult to change when they get used to a way of life. To the extent that, a statement like the devil you know is better than the angel you don’t know is appropriated indiscriminately. As a result, the opposition have to come up with juicy and tantalising overtures to capture the attention of the voters. Let’s train our eyes to the time of Kufuor to catch a glimpse for my analysis. His administration had started an important dam project, he had announced in parliament the discovery of oil deposits at the Jubilee oil fields in commercial quantities, he had instituted the NHIS – a very wonderful social intervention programme and the incumbent presidential candidate, Nana Addo, was riding on the tide of all these successes.

With such sterling achievements from a ruling government, an ambitious opposition party hungry for power will have to be innovative and persuasive. They literally have to scrape the bottom of the barrel to ensure victory. A typical example of such outlandish promises is the one-time payment of the NHIS, which the late President Atta Mills promised in 2008 campaign. It was just a flash in the 2008 campaign pan. The end of the 2008 campaign was the last we heard of it. Though one-time payment of insurance premium does happen in other places, on the other hand, for a professor with a knowledge of economic development in our part of the world surely must have known that it was an absolute mission impossible, yet he sold it.

What I am driving at is not, in the least, to suggest that Nana Addo’s promises are too lofty to be achieved, but time is needed. The unpalatable problems they have to grapple with is unquestionable. The national treasury has been depleted. Much of our future income has already been mortgaged. Besides, more than a third of the national revenue is just for servicing both domestic and international debt. It is imperative that we don’t add more to it to aggravate the situation. The way forward, initially, is to concentrate on how to stabilise and strengthen the Cedi. And secondly, to reduce inflation and drastically bring down the stifling interest rate that is destroying businesses in the country. These are the second to none options if Nana is to make any inroads into materialising his promises.

The last government instead of concentrating on how to expand the economy, rather revelled in taxing the fragile economy to provide sandals, sanitary pad etc. for schools. I doubt whether this is a sensible allocation of the nation’s scarce resources which have alternative uses. Common sense should be the buzzword at Nana’s cabinet table. Certain things must be put on hold now until the economy gathers momentum again. Well, the villages with rivers can’t wait for their dams. However, this should not be done at the expense of the national economy.

The author has 147 publications published on Modern Ghana.