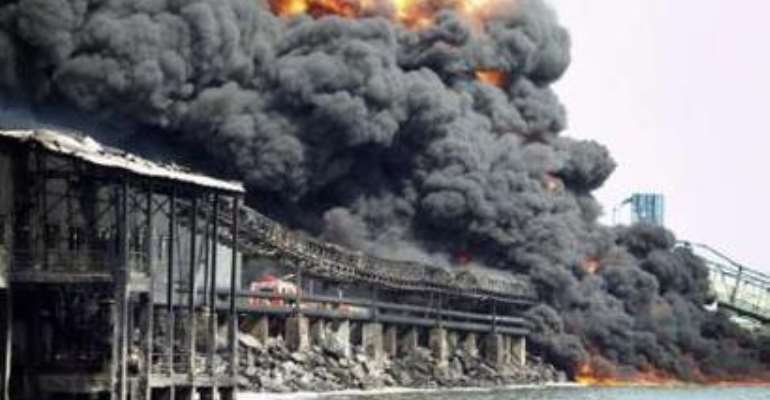 Tema, April 01 GNA - The Port of Tema was on Friday thrown into a state of mourning by family members of the people who lost their lives in the Tema fire disaster when it was confirmed to them that 17 were involved. Professor Christopher Ameyaw-Akumfi mentioned the 17 names on a list one after the other amidst wailing by the families, who had gathered at the offices of the Tema Port to meet with the Minister on developments so far reached. The dead were made up of fourteen welders and three carpenters. However, the family of one John Abroso said they did not hear their relative's name and the Minister assured them that efforts would be made to investigate and give them a feedback. He assured bereaved family of government's support to give a fitting burial to their relatives but cautioned that the bodies were burnt beyond recognition; however, arrangements would be made for those who can identify their dead to do so in due course. For the families who insist on getting their bodies as custom demands, the government would negotiate and give them parts of the bodies. Prof. Ameyaw-Akumfi said they would contact the employers of the dead to find out details of their employment and see how best they could be assisted.
He therefore, requested the family members to give accurate particulars for easy contact.
The families expressed gratitude to the government for the efforts it is making in the situation and prayed that they would be compensated. Two workers, Mr. Stephen Quansah and Mr James Kemavor welders survived in the disaster that also damaged national installations at the PSC Tema Shipyard.
On Good Friday, MV Polaris, a Togolese registered fishing vessel owned by a Greek caught fire when it was being repaired as sparks came into contact with oil spillage on the surface of the water and engulfed the vessel thus killing the 17 and destroying other installations including oil pipeline and pumping station, VALCO conveyor belt as well as fishing companies.

Plan by gov’t to purchase new presidential jet is to satisfy...
11 minutes ago