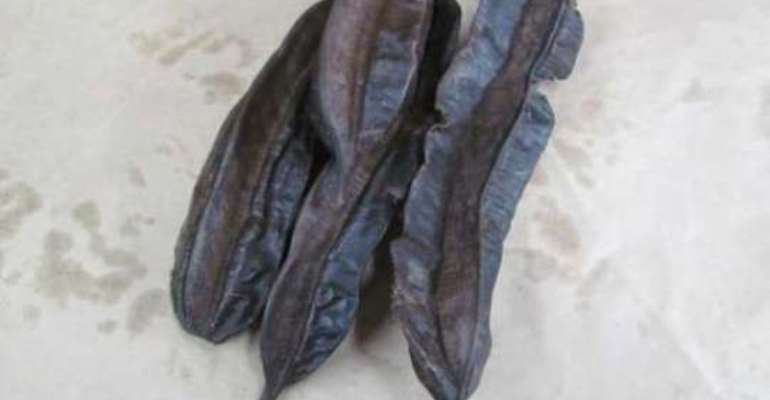 By D.I. Laary, GNA
Accra, Oct. 20, GNA - Prekese fruits as known among the twi speaking people, has been identified as a powerful medicinal plant for curing blood pressure and chronic headaches, common medical conditions that trouble many Ghanaians.

The fruit, which is often used for flavouring food especially soup is gradually gaining researchers' attention in the country is known in scientific parlance as 'tetrapleura tetraptera.'

'The fruits are taken to treat hypertension and headaches and helps in the production of increased breast milk in lactating mothers,' researchers with the Forestry Research Institute of Ghana (FORIG) said on Wednesday.

They expressed worry that indigenous knowledge about the plant, which belongs to the family of forest foods and medicinal species, as among many other plants, could die out if laws were not passed to preserve them.

According to the scientists 289 species of plants have been spotted and recorded, out of which 43 have been recognised as food, 199 medicines and 47 seen to have properties of both food and medicines.

'A policy on local indigenous knowledge must be developed in Ghana to cover agricultural sector - improvement of indigenous agricultural technologies, use of soil improving techniques,' FORIG officials said in a background to a two-year study.

'The study was carried out in parts of the country on plant species on 'digitisation of indigenous knowledge in the forestry sector in Ghana.'

'This study opened up significant gaps in the processing of indigenous knowledge in Ghana with special reference to forest food and medicines,' said Mrs Margaret Sraku-Lartey, the Project Leader.

'There is no international consensus yet about how indigenous peoples' rights on the protection of their cultural knowledge systems can be secured legally, promoted ethically and used resourcefully.'

'So far no legislative instrument has been identified in Ghana's laws concerning the management of indigenous knowledge.'

She said enough attention ought to be given to the documentation and digitisation of the local knowledge.

FORIG in an attempt to record and keep information for generations to come has developed an online database to enhance access to and promote the preservation of traditional knowledge on forest foods and medicinal plants in the country.

The database would also enable people to access the information but prevent persons from appropriating local knowledge for private gain.

The number of people living with hypertension - high blood pressure - is predicted to be 1.56 billion worldwide by 2025.

The increasing prevalence of the condition is blamed on lifestyle and dietary factors, such as physical inactivity, alcohol and tobacco use, and a diet high in sodium - usually from processed and fatty foods.