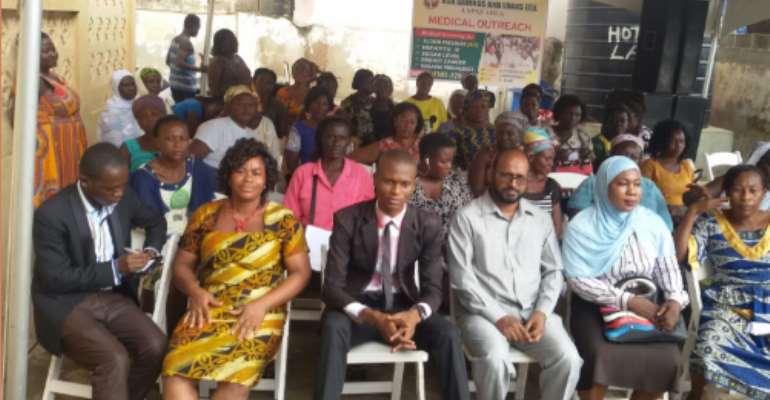 He noted that the event which saw over 120 clients went through a medical screening for sicknesses for blood pressure, hepatitis B, malaria and sugar level.

The Regional Manager added that participants were also provided with free medical prescription for minor cases whiles others were advised to seek medical treatment elsewhere for major cases.

Ashraf Ali indicated that the Company has been organizing similar events to ensure that the social and medical life of its clients, which impacts directly on their operations, is safeguarded.

According to him, women are easy prey to society and they become more vulnerable to any diseases and illness which often makes them less productive among the male counterparts.

Ashraf Ali noted that they are helping women to alleviate poverty in the society by way of providing them with not only loans but preventive measures that will protect them against diseases such as malaria, fever, stress and other medical conditions.

He emphasized that in addition, the company is poised to organize and expand this initiative in order to reach out more people in the country.

According to him, with a clientele base of over 118,000 members, ASA Savings and Loans is however providing the low interest rate loans of 20percent to businessmen and women for a period of six months.

He added that since its inception in 2008, ASA Savings and Loans continues to remain as the market leader in the money market with a flexible payment terms that makes life easier for market women and the businessmen to make more profit and repay the loans.

Ashraf Ali stated that this effort has made it easier for them to recovery 100percent of their cost for the past six months in this year.

He posited that ASA Savings and Loans which literally means ‘hope’ is providing loans to businesses in order to increase their momentum to engage in more profitable ventures.

The company, according to him, is currently operating in six regions in the country namely Greater Accra, Ashanti, Brong Ahafo, Central, Western and Eastern Region.

Ashraf Ali indicated that they have a total of 93 locations and 77 business centers plus 16 branches in the country.

The Regional Manager posited that by 2020 ASA Savings and Loans will spread its tentacles in all the 10 administrative regions of the country.

According to him, their aim is to help the poor by alleviate poverty adding that “Very soon we will start providing full scholarship to needy but brilliant students so that they can complete their education and support their family.”

He added that they have branches in Nigeria, Uganda, Tanzania, Rwanda, Sierra Leone including Ghana with financial support from its headquarters in Mauritius and technical support from Bangladesh.

Samir Sani, Area Manager, Lapaz, noted that their main target is the vulnerable and the less privilege in the society who has no means of financial support to start up a business on their own.

“We need women who are hardworking and determine to make it in future. We support them by way of proving financial solutions to their problems,” he stated.

He indicated that the unique feature of ASA Savings and Loans Limited is the level of transparency and commitment to its clients that are geared towards building trust and confidence in the company.

According to him, they are cost effective company in terms of managing within a reasonable means in order not to over burden their clients with transfer cost.

Sani noted that the medical exercise is to enhance their commitment to the clients of providing them with solutions to their life socially and medically.

He concluded that ASA Savings and Loans Limited will extended this gesture to other surrounding areas in Lapaz communities by way of proving free medical services and free scholarships to brilliant but needy children.