Managers of our country are stealing our money, change them – Bawumia 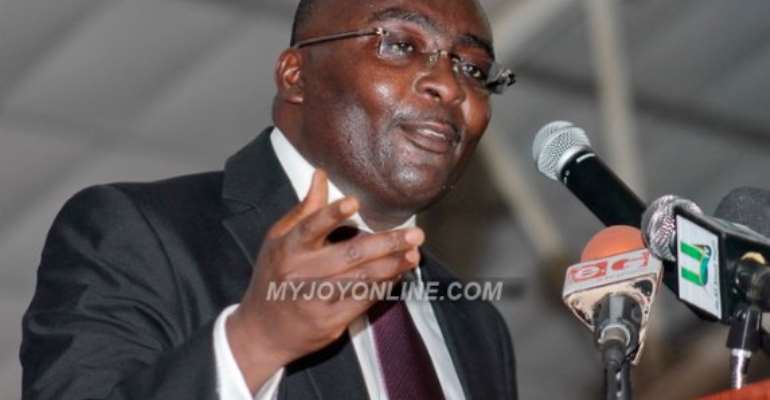 The Vice Presidential Candidate of the New Patriotic Party (NPP) says individuals entrusted with resources of the country are "stealing them."

Dr Mahamudu Bawumia believes retaining the current government would amount to an endorsement of the wanton dissipation of the nation's resources.

He therefore made a strong call for Ghanaians to vote in the NPP in the December elections.

Speaking to residents of Nyanyano, a suburb of Kasoa in the Central Region, the former deputy Governor of Bank of Ghana said, we should end the practice where people will steal our money to Burkina Faso and Dubai.

The celebrated economist has maintained momentum in his criticism of government with 71 days to the presidential and parliamentary polls.

At a public lecture held at the National Theatre on September 8, he accused the governing National Democratic Congress (NDC) of “recklessly mismanaging” the nation’s economy.

According to him, taxes and loans raised under the eight years of the NPP from the period of 2001-2008 was GHC20 billion compared to the GHC248 billion the NDC government has had from 2009-2016.

This, he believes was 12 times the nominal resources the NPP had in its two terms.

That was not the first time he has taken on the NDC government. In March 2014 when the Ghanaian cedi was being battered in the international financial market, Dr Bawumia predicted the cedi would suffer further if the government failed to be forthright with Ghanaians.

Government mocked at his claims and the cedi suffered against currencies such as the US Dollar, the UK Pound, the Chinese Yen and the South African Rand.

The NDC debunked some of his claims at a Forum for Setting the Record Straight Series, addressed by the Transport Minister Fifi Kwetey on September 22.

He said said any argument that compares resources the NDC has had to determine its performance is a “lazy and laughable excuse.”

The NDC, he said has demonstrated that without oil money it could grow the economy and make Ghanaians live a better life.

But Dr Bawumia said the NDC has been unable to defend some of the claims of impropriety levelled against its functionaries.

“When we challenged the NDC they couldn’t defend because they know the money is there. Our priority is to give every constituency $1 million every year to undertake developmental project,” he said.